Dealing with the cold air of January or just a particularly damp, rainy day can be a challenge for most Filipinos. Living in a tropical country, there are some Filipinos who just can't bear really low temperatures. This is probably why Filipinos over the years have developed an amazing variety of culinary delights especially for these occasions, created, developed and passed on to generations to bring warmth to the shivering Filipino. So when the temperatures hit the low end, expect Filipinos to seek these out to warm their bellies and their bodies. Other just make the cold a reason to indulge a craving for something different. It is undeniable that these Filipino food have brought us warmth, comfort and ease whenever we needed them. 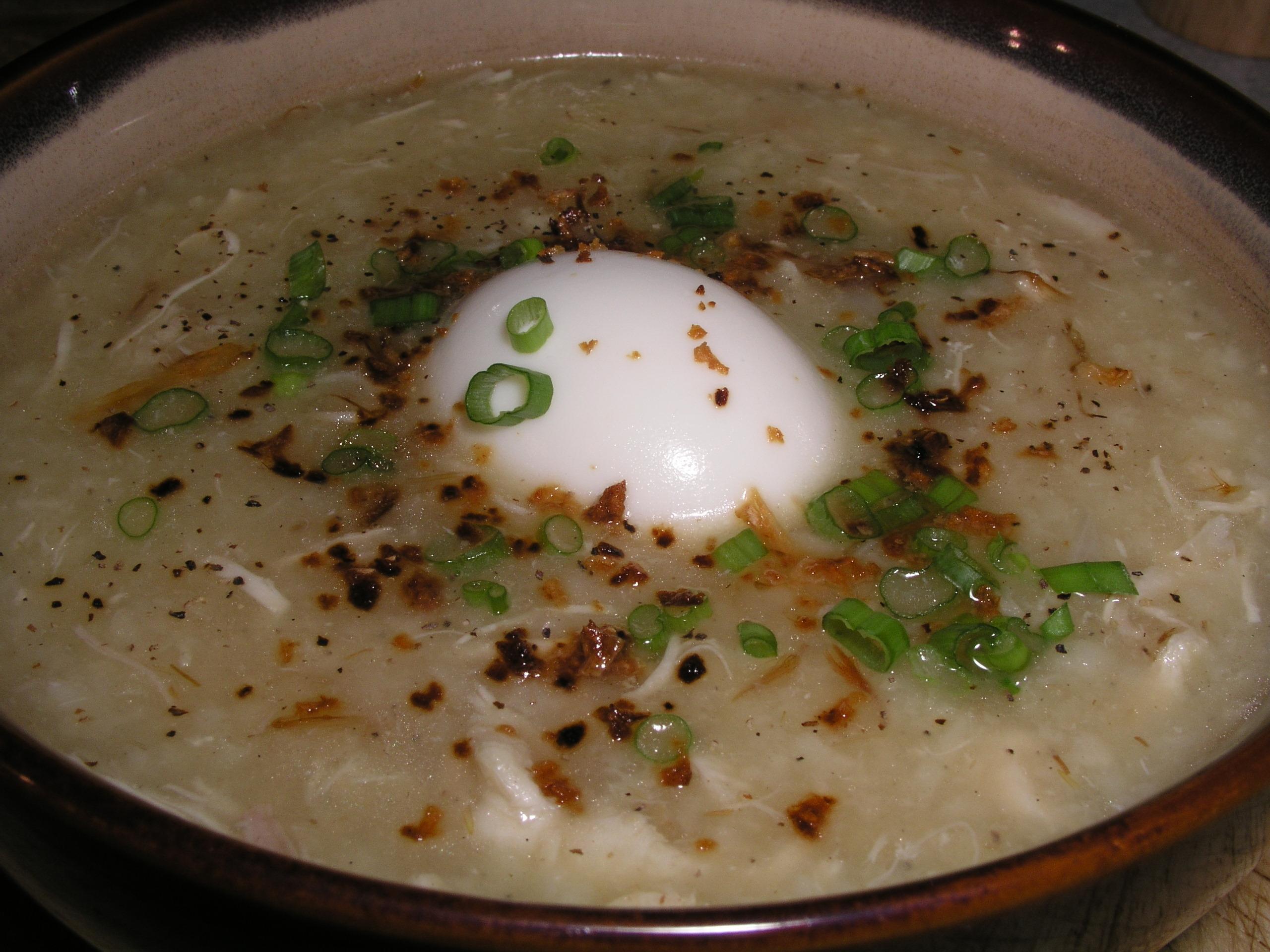 Dealing with the cold air of January or just a particularly damp, rainy day can be a challenge for most Filipinos.  Living in a tropical country, there are some Filipinos who just can't bear really low temperatures. This is probably why Filipinos over the years have developed an amazing variety of culinary delights especially for these occasions, created, developed and passed on to generations to bring warmth to the shivering Filipino.  So when the temperatures hit the low end, expect Filipinos to seek these out to warm their bellies and their bodies.  Other just make the cold a reason to indulge a craving for something different.  It is undeniable that these Filipino food have brought us warmth, comfort and ease whenever we needed them.

The following are 10 of some of the many great Filipino food on a cold day. 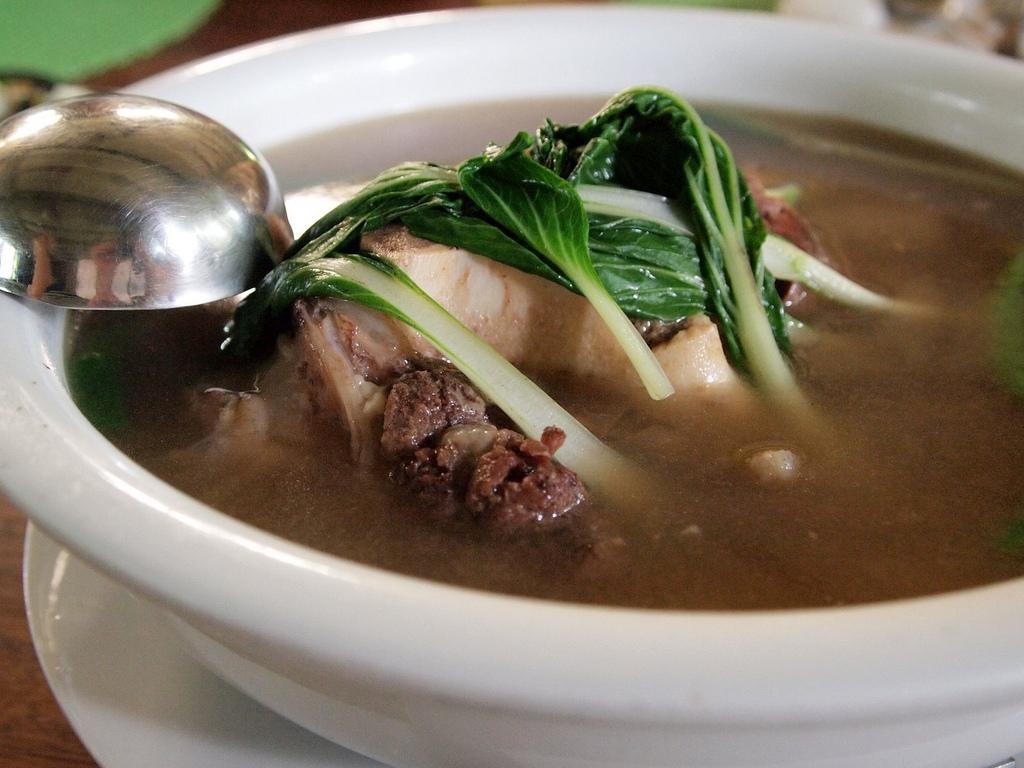 Probably the first Filipino dish in most Filipinos' minds to look for on a cold or rainy day is bulalo, a Batangas specialty.  Although it can now be found and sold almost anywhere in the metropolis, there are still a number of loyal fans who seek out this dish in Batangas itself, where it is served in small roadside shops and carinderias.  What makes bulalo unique is it's a soup whose main ingredient is beef bone marrow, from which it derives its name.  Its other ingredients include beef portions and spare ribs.  It may also include vegetables like cabbage as well as a portion of yellow corn. It's wonderfully meaty taste and aroma makes this dish such a welcome meal in nippy or stormy weather.

These and several other similar Filipino dishes are varieties of rice porridge but differ in ingredients and in consistency. Lugaw is the Tagalog name for congee. Similar to Cantonese-style congee, lugaw is typically thicker, retaining the shape of the rice, but with a similar texture. It is boiled with strips of fresh ginger. Other flavorings may be added according to taste. Most often it is topped with scallions and served with crispy fried garlic. Fish or chicken stock may be used to flavor the broth. Lugaw can also be served with tokwa't baboy (diced tofu and pork), goto (beef tripe), utak (brain of pig), díla (tongue of pig), litid (beef ligaments).  Condiments or sauces like pepper, patís, soy sauce and kalamansi are added by the person eating according to personal taste. It is often served to the ill and the elderly, and is favoured among Filipinos living abroad in colder climates because it is warm, soft, and easily digestible. The Spanish-influenced arroz caldo (an anglicisation of caldo de arroz, literally "rice soup") is often thought to be a European dish because of its name. Arroz caldo is actually a Chinese congee that was adapted to the tastes of the Spanish colonial settlers who patronised Chinese restaurants in the Philippines.  Arroz caldo is usually spiced with safflower and black pepper in place of or in addition to the more traditional ginger and scallion. Arroz caldo is more popular among people of Ilokano heritage, although those of other provinces, such as Cebu, often eat it with the addition of prawns, olive oil, bay leaf, and Chinese sausage.

The best thing about lugaw and arroz caldo is that they can be found almost anywhere and don't cost much as well, making them a boon to the hungry and shivering out on a cold day or night. When stuck inside the home on a particularly cold or stormy day, nothing sends Filipinos into nostalgia of childhood better than thoughts of warm champorado served by their mothers.  Eaten by children with evaporated or condensed milk and extra sugar, this has been a beloved snack by generations of Filipinos.
Champorado, or tsampurado is a sweet chocolate rice porridge in Philippine cuisine. It is traditionally made by boiling sticky rice with cocoa powder, giving it a distinctly brown color and usually with milk and sugar to make it taste sweeter. However, dry tsampurado mixes are prepared by just adding boiling water. It can be served hot or cold and with milk and sugar to taste. It is served usually at breakfast and sometimes together with salty dried fish locally known as tuyo.

The pudding becomes very thick and the lighter milk helps to "loosen" it. It's almost like eating "chocolate oatmeal." It can be eaten as a snack or dessert as well.

Its history can be traced back from Mexico. During the galleon trade between Mexico and the Philippines, there were Mexican traders who stayed in the Philippines and brought with them the knowledge of making tsampurado (this is also the reason why there is Tuba in Mexico). Through the years, the recipe changed; Filipinos eventually found ways to make the Mexican champurrado a Philippine tsampurado by adding rice. Hot soups are very welcome on a freezing day.  They warm the body up like no other food can, like Batchoy, a noodle soup made with pork organs, crushed pork cracklings, chicken stock, beef loin and round noodles. Its origins can be traced to the district of La Paz, Iloilo City in the Philippines, hence it is oftentimes referred to as La Paz Batchoy. Ingredients include pork organs (liver, spleen, kidneys and heart) crushed pork cracklings, beef loin, shrimp broth, and round noodles or miki. The noodles are similar to spaghetti, but are generally a bit finer.

Oil is heated in a stock-pot. The pork organs, shrimp, chicken and beef are stir-fried for about a minute. Soy sauce is then added. The shrimp is then added and left to simmer for a few minutes. This broth is then added to a bowl of noodles and topped with leeks, pork cracklings (chicharon) and sometimes a raw egg is cracked on top.

Most Filipinos eat the soup using spoon and fork, although it may undoubtedly be eaten using chopsticks as well. The solid ingredients (noodles and meat) are generally consumed first, the liquid broth rounds out the meal. Diners are encouraged to ask for a second, third, or even a fourth helping of kaldo, Hiligaynon for "broth." Although a common viand or accompaniment for rice for main meals, tinola is the dish of choice to share some warmth and comfort for families when the weather is freezing.  The warm, tasty soup and tender pieces of chicken make this dish a favoite of Filipinos young and old alike.

Tinola in Tagalog or Cebuano, or la uya in Ilocano is a soup-based dish served as an appetizer or main entree in the Philippines. Traditionally, this dish is cooked with chicken, wedges of green papaya, and leaves of the siling labuyo chili pepper in broth flavored with ginger, onions and fish sauce. A common variant substitutes pork for chicken, sayote instead of papaya, or moringa leaves known as marungay or malunggay or "kamunggay" (in Cebuano), instead of pepper leaves. Another particularly tasty treat during gloomy weather is Molo soup or or pancit molo.  Served hot, this soup just might be what one needs to lift one's spirits and body temperature.  Molo is a soup whose ingredients include ground pork in wonton wrapper.  It is served with pieces of shrimp or chicken. This dish is said to have originated in Molo, a part of Iloilo renowned for many unique Filipino delicacies. Also known as macaroni soup, this dish also evokes memories of childhood, as this uniquely adapted Filipino dish is often cooked by mothers for their children on rainy or cold days.  Sopas, which literally means soup in Filipino, is a variety of chicken soup made with elbow macaroni, milk, butter. Many varieties exist, with other added ingredients like vegetables and even hotdog slices.  This soup is perfect for those who are sick or recovering from illness, or just about anyone stuck on a cold, gloomy day. Although ginataang halo-halo can be found all year round, this traditional Filipino treat can be one of the best things you'll ever have when served hot on a particularly cold and/or rainy day.  This treat is made from gata, or coconut milk, from which it derives its name.  The cocout milk serves as the base for this sweet stew with a variety of ingredients that can include saba or plantains, tapioca, kamote or sweet potato, cassava, ube or yam, and langka or jackfruit.  This makes for a thick soup-like snack that when served hot makes for a sweet, filling and satisfying meal. A welcome dish on a cold day is dinuguan.  This unique, delectable dish is a savory stew of meat and/or offal (typically lungs, kidneys, intestines, ears, heart and snout) simmered in a rich, spicy dark gravy of pig blood, garlic, chili (most often siling mahaba), and vinegar. The term dinuguan comes from the Filipino word dugo meaning "blood," its defining ingredient.  Dinuguan can also be served without using any offal, using only choice cuts of pork. In Batangas, this version is known as sinungaok. It can also be made from beef and chicken meat, the latter being known as dinuguang manok ('chicken dinuguan'). Dinuguan is usually served with white rice or a Philippine rice cake called puto. While not everyone may find its dark brown appearance enticing, it is certainly a filling and savory treat.
10. Sotanghon A delightfully tasty soup Filipinos reserve for cold weather is sotanghon.  The main ingredient for this dish is a thin noodle called sotanghon, which is similar to Vermicelli. Its unique flavor comes from chicken and shrimp. Even though many variations of the recipe exist, all are welcomed by people looking for a warm, hearty meal on a really cold day.