The kind of street food a country has gives a person a glimpse into the culture of the people. In the case of the Philippines, one cannot help but be amazed (or be shocked) at the creativity, ingenuity, and variety of the street food that are for sale in many areas in the Philippines, particularly in the big cities. Street food are there because they are eaten on the go, are convenient and inexpensive. 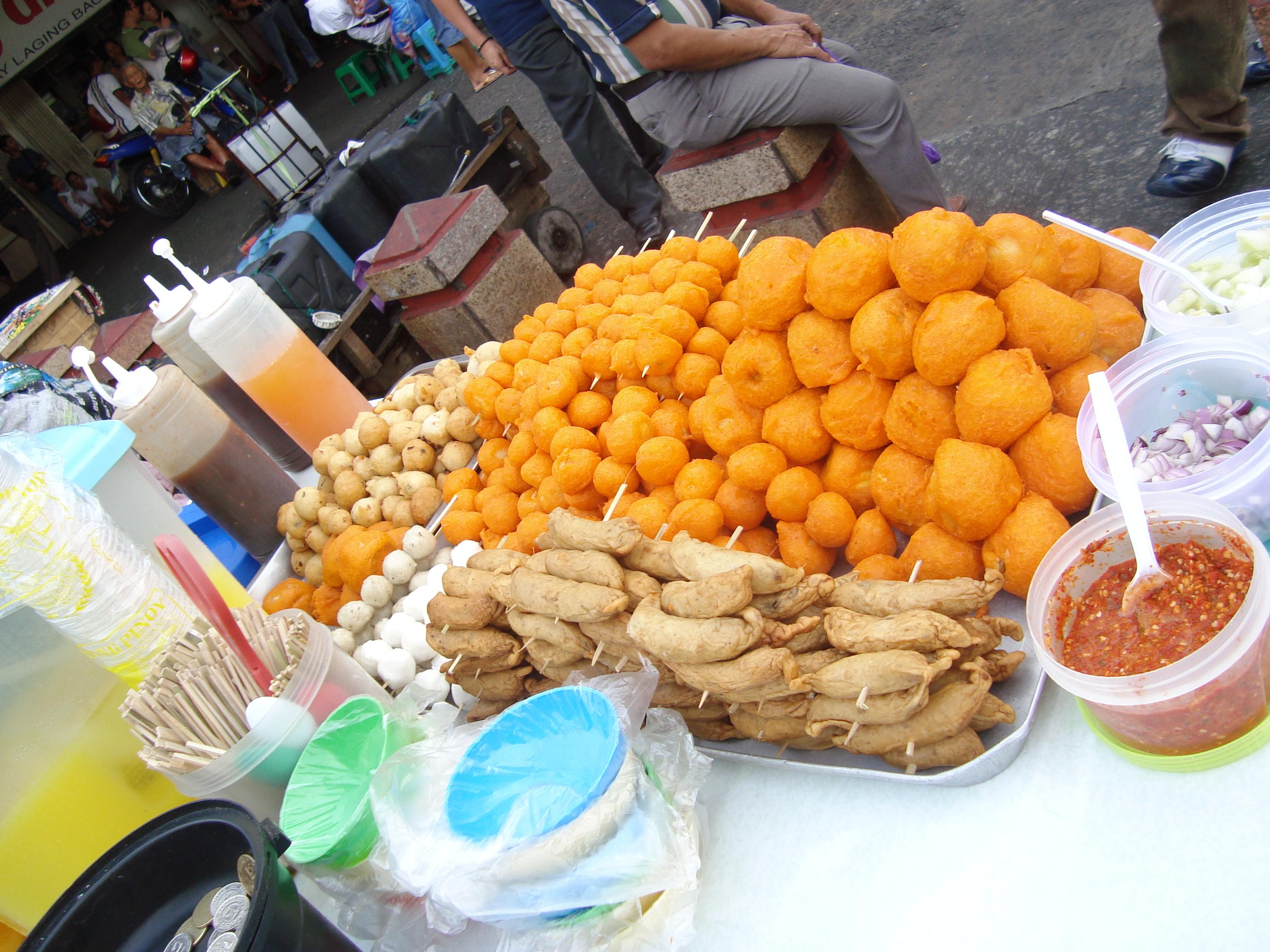 The kind of street food a country has gives a person a glimpse into the culture of the people.  In the case of the Philippines, one cannot help but be amazed (or be shocked) at the creativity, ingenuity, and variety of the street food that are for sale in many areas in the Philippines, particularly in the big cities.  Street food are there because they are eaten on the go, are convenient and inexpensive.  In today's hectic lifestyle, it can be hard to get a decent, liesurely meal, which is something street food can offer many solutions to.  Eaten while standing, walking, sitting on monoblock plastic chairs, or even on the run, street food are the convenient answer to a growling stomach, a nagging craving, or something to take home to loved ones or something nibbled on to pass the time.  Street food being inexpensive is also a big bonus, as one can get their fill without putting the personal and family budget in jeopardy. Sometimes the average pedestrian cannot help but fall victim to the different alluring sights, sounds and smells that accompany the selling of street food along the sidewalk.  It's difficult not to crave for things that look juicy, colorful, or scrumptuous.  It's difficult to ignore hawkers' yells, bells, gongs or chimes.  It's diffcult not to feel hungry upon smelling something being fried, grilled or boiled along the street.

Credit must also be given to the hawkers and vendors of street food.  These hardworking and diligent entrepreneurs have continually come up, invented and reinvented these wide assortment of treats that appeal to the palate of the people of the street.  Using their ingenuity and imagination to create something inexpensive, convenient and edible from simple to bizaare ingredients, vendors have continually evolved into uncelebrated proponents of a unique form of entrepreneurship, cuisine, probably even art.

In its many shapes, tastes and forms, Filipino street food have not just come to stay; they continually evolve to bring sustenance, delight, and probably even culture to the people on the street.

Below are 10 unique Filipino street food one can find almost everwhere in the country. 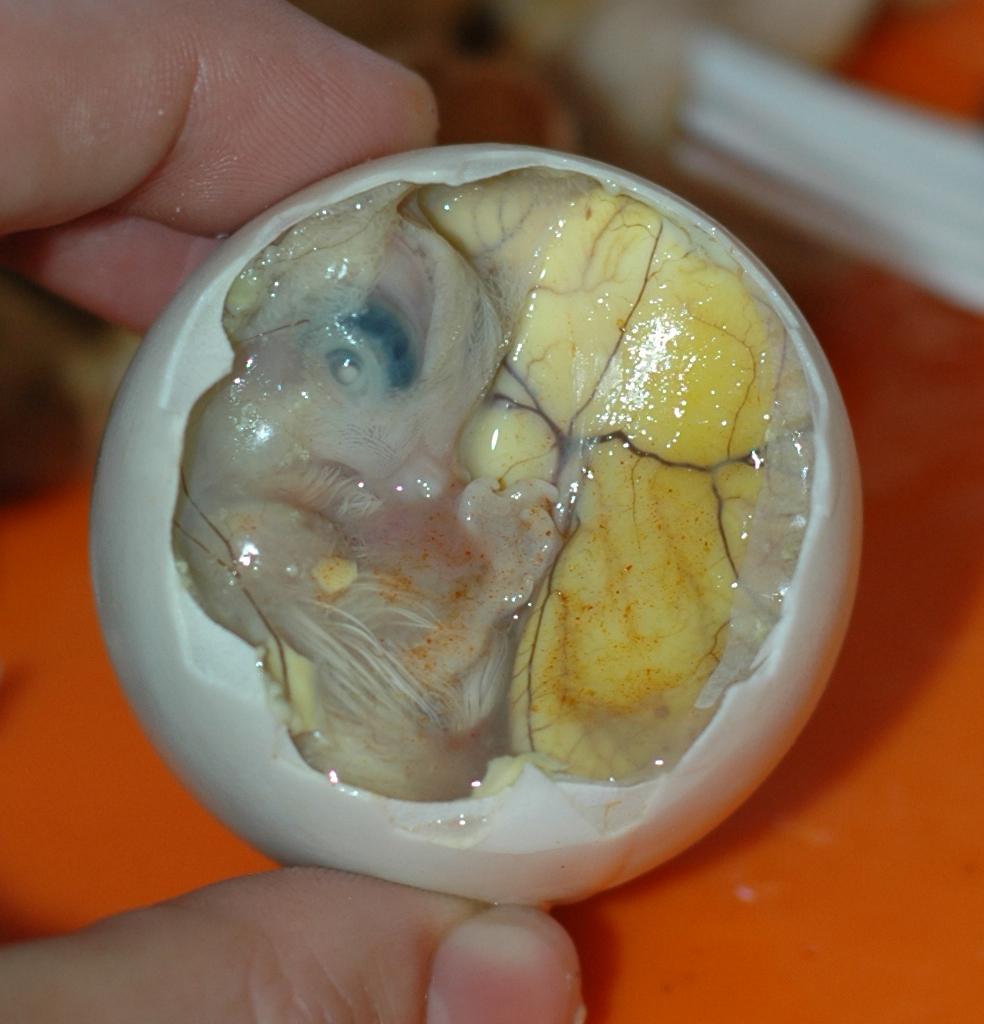 To the uninitiated, eating a boiled pre-hatched duck egg may be mildly unappetizing, unappealing, or sometimes just plain unimiginable. However, most Filipinos simply love the delicate tastes and textures of balut.  These are fertilized eggs are allowed to develop until the embryo reaches a pre-determined size and are then boiled.  Balut are one of the best and cheapest sources of protein around, and it is widely rumored to be an efficient aphrodisiac, given that eating one supplies lots of energy and stamina.

Filipinos relish sucking out the delightfully warm amniotic fluid right after breaking one end of the egg, then proceeding to eating the warm, succulent mass on the inside.  Balut is better enjoyed with a little salt and/or vinegar.  Balut is best enjoyed not knowing what you're actually eating.

2. Balls of Many Kinds 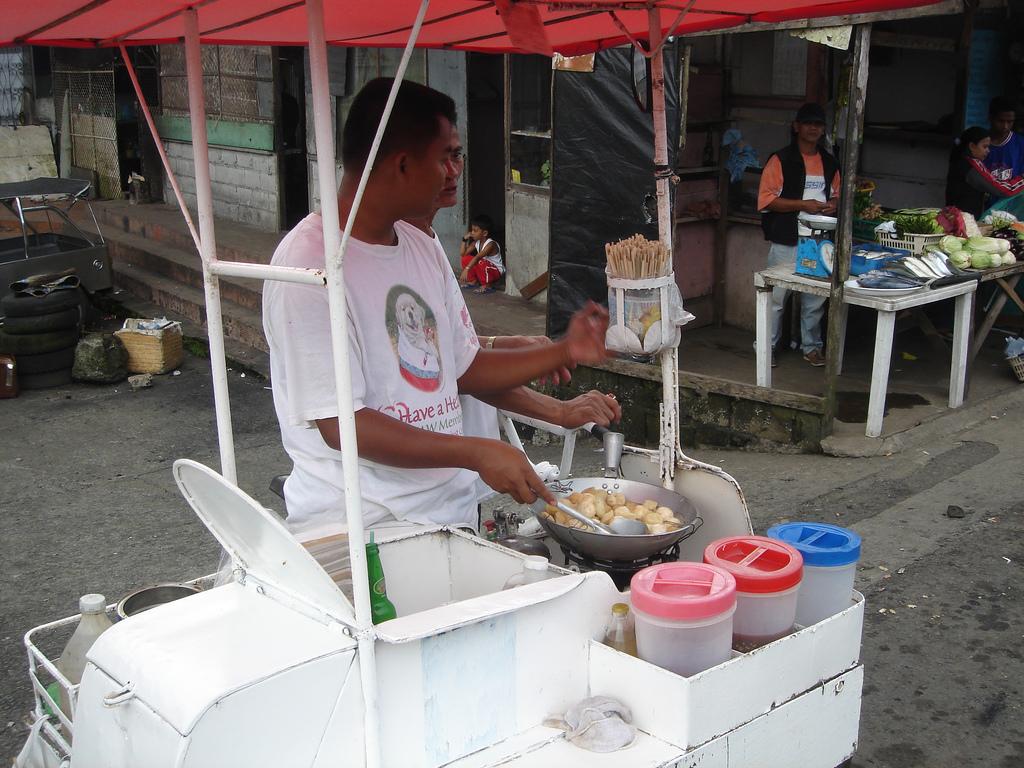 Every Filipino craves for good fish balls, squid balls, and chicken balls every now and then, a craving easily solved becauses theres a vendor for it in every corner even late into the night.  And if rumors are to be believed, sometimes, if there are no vendor in sight but you want it bad enough, a vendor will appear suddenly as if he/she had read your mind. Fish balls, squid balls, and chicken balls are  varieties of dough-like balls made from cuttlefish or some varieties of fish.  Flavoring is later added depending on the variety.  These are then packaged and sold frozen in markets.  These are bought by street vendors and peddled from carts which include a small kerosene stove and wok or deep frying pan.  These balls are then deep fried until cooked.  The balls are then skewered on bamboo sticks then dipped in a sweet or savory sauce.

Every Filipino wants one (or ten) of these during merienda because they are sweet and filling and really are enjoyed warm.  Banana cue which is a whole banana or plantain skewered on a short thin bamboo stick, rolled in brown sugar, and fried. 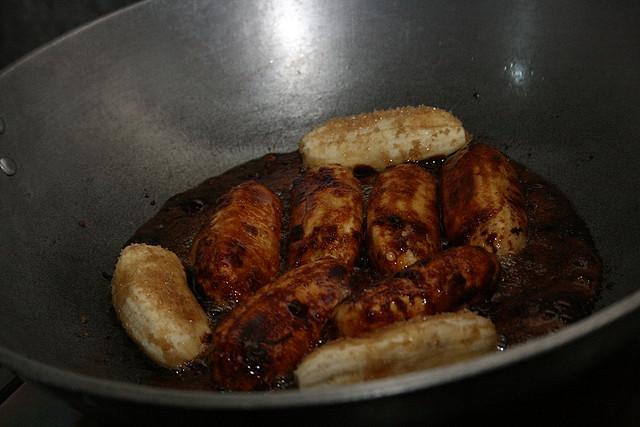 Kamote cue is a peeled sweet potato skewered on a stick, covered in brown sugar and then fried. 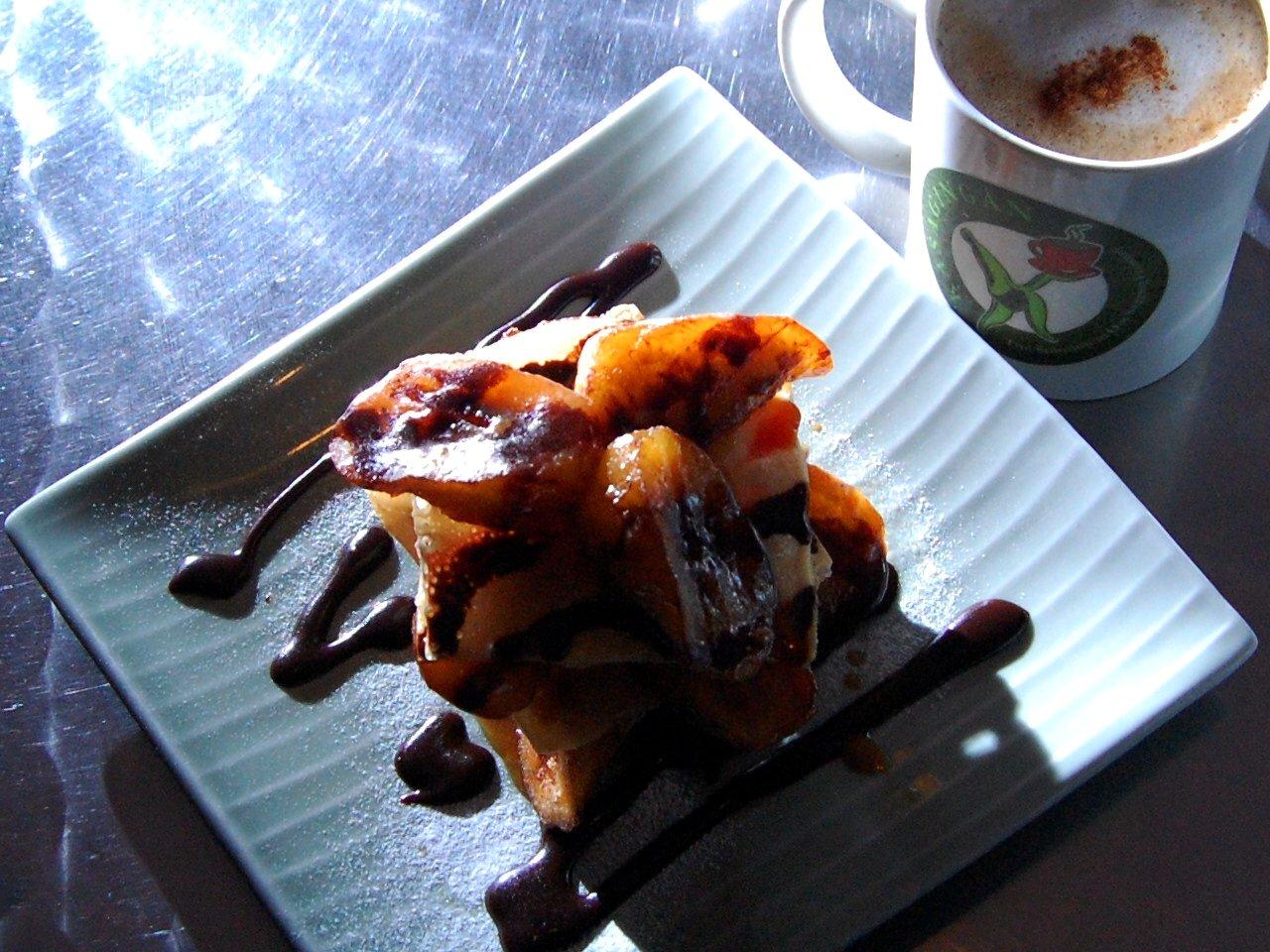 Maruya are plantains which have been cut, dipped in a batter of flour, egg and sometimes food coloring, deep fired and then sprinkled with sugar. 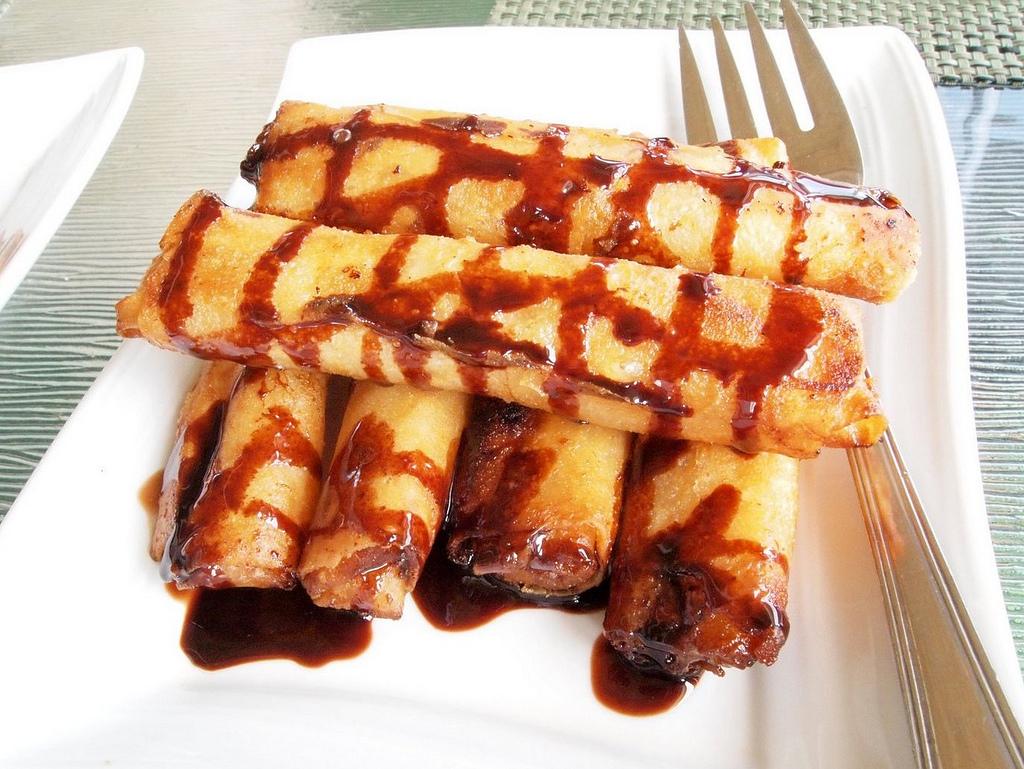 Turon a kind of fried lumpia consisting of an eggroll or phyllo wrapper filled with plantain and jackfruit and sprinkled with sugar can also be found sold in streets. These treats are wholesome and enjoyable and never fails to serve as a quick, filling snack.

4. A variety of Cues 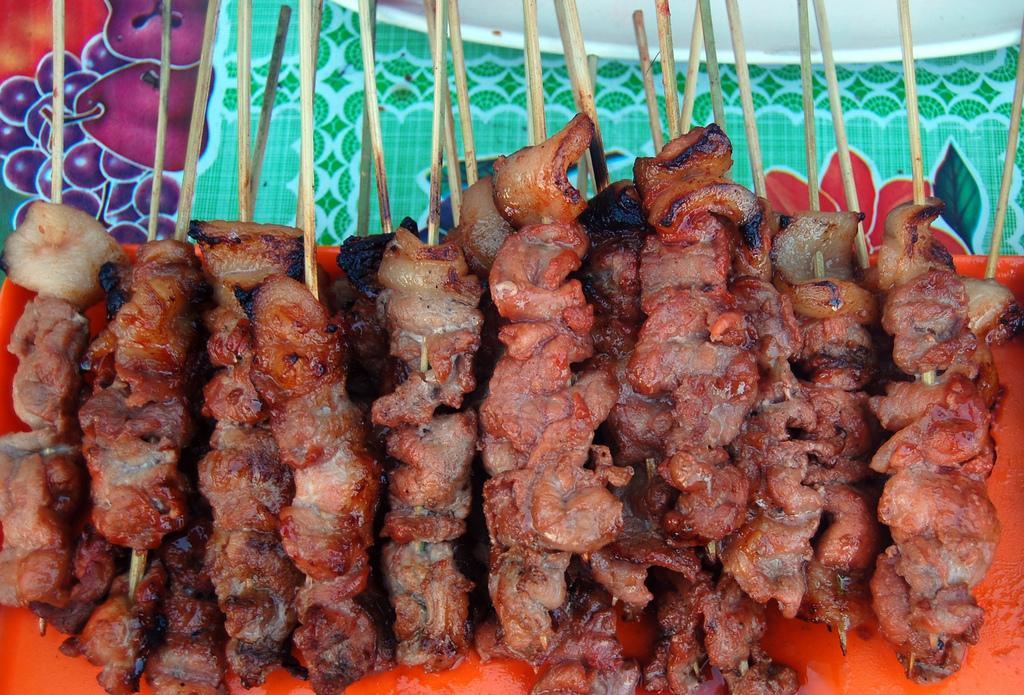 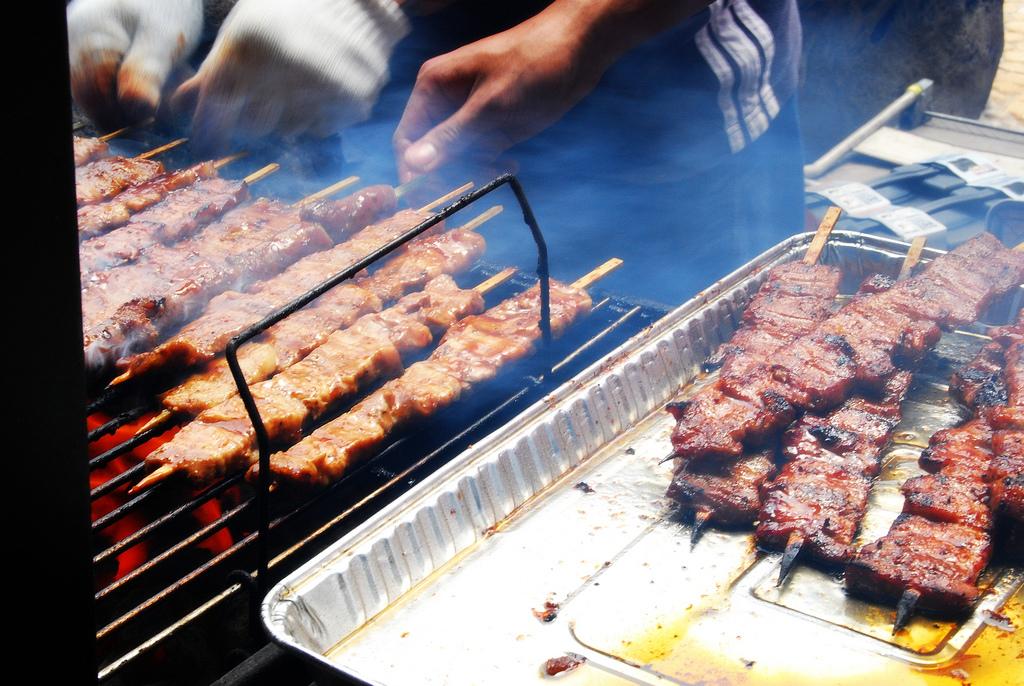 Probably more interesting than their taste or presentation are the creative names given to them.  Isaw or IUD are seasoned hog or chicken intestines.  Betamax are roasted dried chicken blood served cut into and served as small cubes for which it received its name in resemblance to a Betamax tape.  Adidas are chicken feet named after the popular shoe brand. Walkman is grilled pig ears.  Helmet is chicken head. These grilled treats are best eaten dipped in savory sauce or vinegar for a quick snack or are served as pulutan with beer and other drinks.

Once only hawked by elderly women pushing a cart with a tub and striking a small gong-like instrument, Binatog is a street food that has come into the mainstream lately, with the once humble binatog now being sold in stalls at malls. The traditional snack binatog is made up of white corn which was been steamed and then mixed with shredded coconut.  Sometimes it is served with milk, salt or sugar.  It makes for a nice, flavorful and chewy snack. While taho may be a snack that evokes memories on childhood, it is a treat that anyone can still enjoy antime and anywhere.  Most taho vendors prepare their goods before dawn. The main ingredient, fresh soft/silken tofu is processed to a consistency that is very similar to a very fine custard. Brown sugar is then heated and caramelized to create a viscous amber-colored syrup called arnibal. Sago "pearls," purchased from the local market or palengke, are boiled to a gummy consistency until they are a transluscent white. The magtataho, the local name of the taho vendor, is a common sight in the Philippines. A magtataho carries two large aluminum buckets that hang from each end of a yoke. One of the buckets (the larger one) carries the tofu base; the other, smaller bucket holds the arnibal and sago "pearls."

Taho vendors peddle their product in a distinctive manner, calling its name in a full, rising inflection as they walk at a leisurely pace either along the sidewalk or, in rural communities, in the middle of the road. As most magtataho keep a habitual route, it is not uncommon for vendors to call out "tahoooooo!" to attract a customer's attention. Though vendors are most likely to ply their routes early in the morning, it is not uncommon for a magtatahô to be spotted in the late afternoon or the evening as well.

And then there are street food that are strongly influenced by our Asian neighbors.  The usual kikiam is a common product sold deep fried usually by fish ball vendors.  Kikiam is commonly made up of ground meat and vegetables in bean curd. 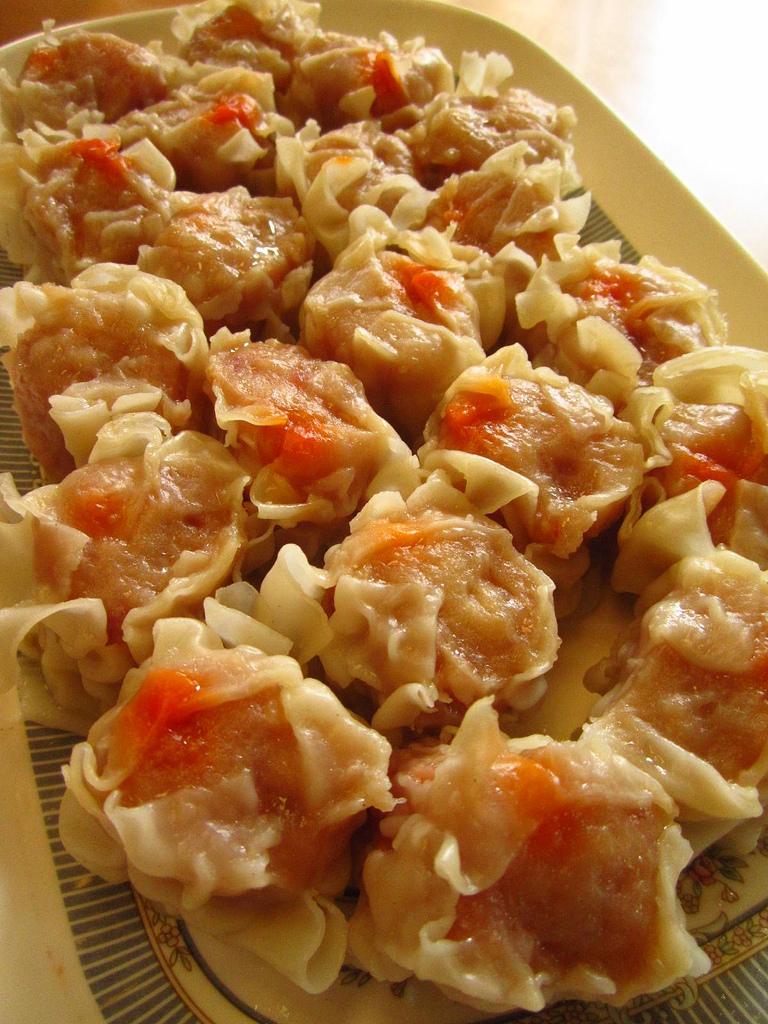 Siomai is another Chinese-influenced street food which is a local version of a small dumpling filled with meat or shrimp and enyoyed with soy sauce. 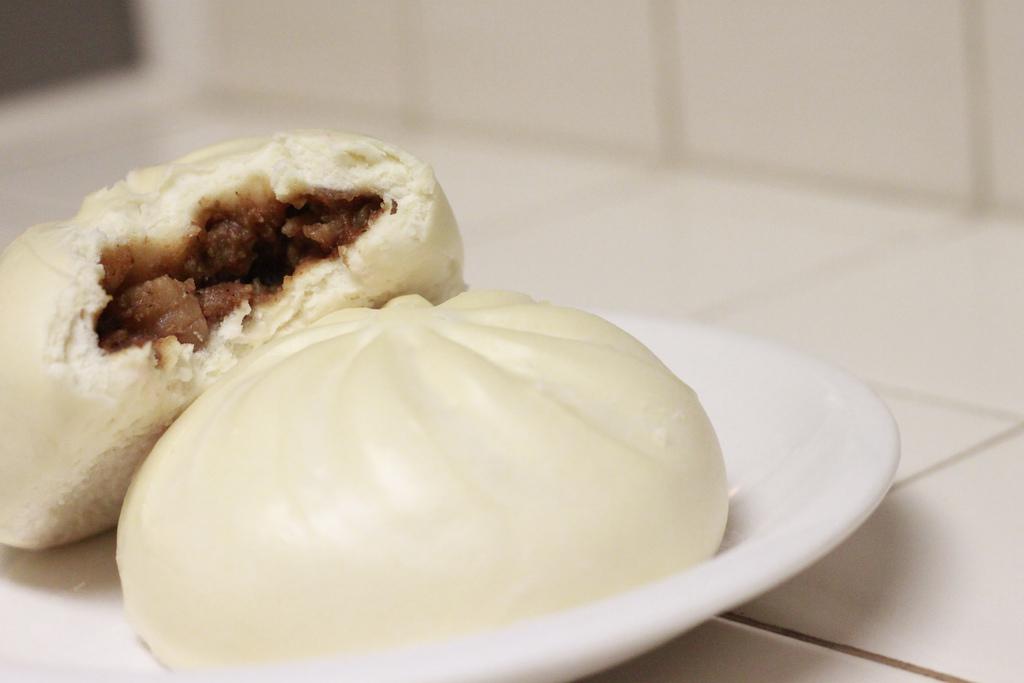 Siopao is a steamed meat bun that comes in a variety of flavors, like asado or bola-bola, with special varieties containing salted duck eggs. It is best enjoyed hot off the steamer with its matching special savory sauce.

The sight of an iskrambol vendor evokes memories of childhood as most Filipinos have enjoyed this sweet, cold treat when they were young.  Also, one cannot be awed by its delightfully strange, almost unnatural, bright pink color.  There is also iskrambol (from the English "to scramble"), that is a kind of iced-based treat like a sorbet combined with various flavorings and usually topped with chocolate syrup. It is eaten by "scrambling" the contents or mixing them, then drinking with a large straw. It was later modified into ice scramble, or simply scramble, but with added skim milk, chocolate and/or strawberry syrup, and a choice of toppings such as marshmallows, chocolate or candy sprinkles, rice crispies, or tapioca pearls. 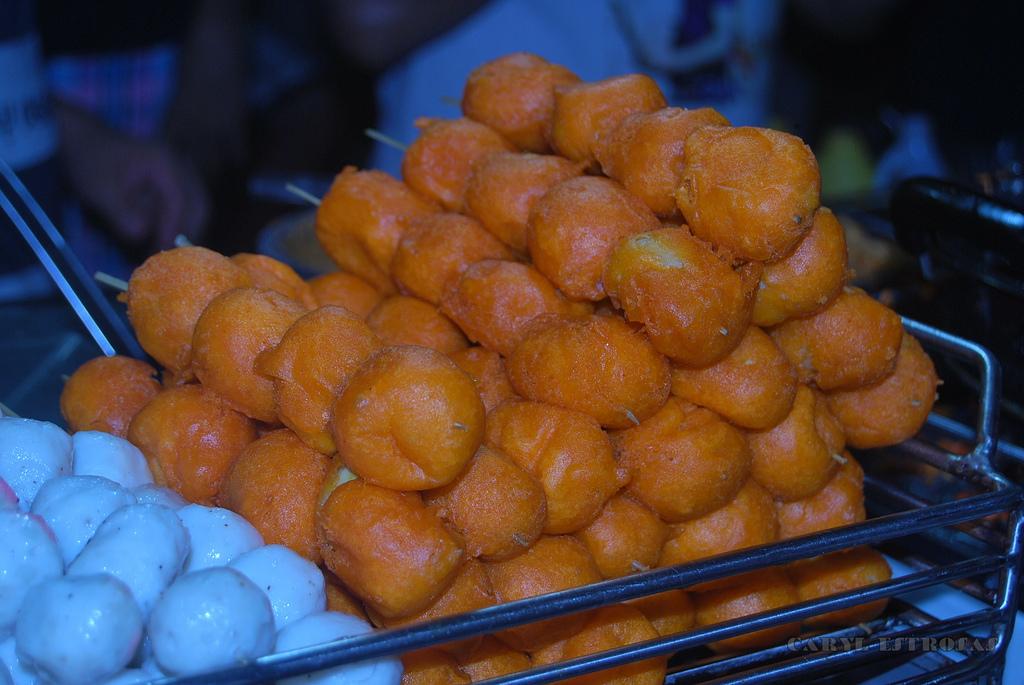 Two of the most common street food that can be found almost anywhere, edging out all other street food, is the kwek-kwek and tukneneng.  Kwek-kwek are hard-boiled quail eggs dipped in orange-dyed batter and then deep fried similar to tempura. Tokneneng is a larger version of kwek-kwek using chicken or duck eggs. These street food offer a fast, filling and tasty meal for many who are on the go.  Twek-kwek are eaten in bamboo skewers and dipped in spicy vinegar.  Tokneneng are usually eaten in a small bowl filled with spicy vinegar, usually eaten with a spoon. 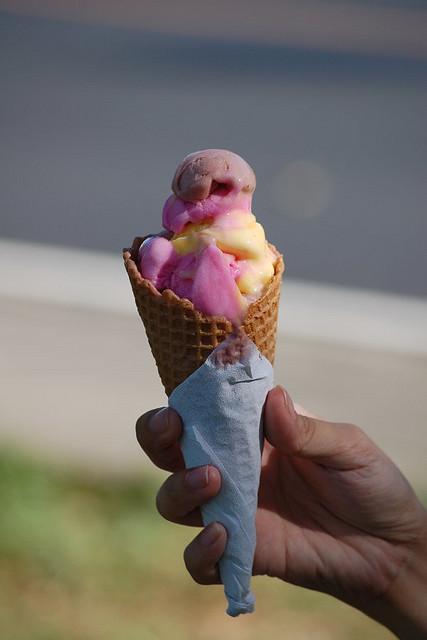 Few street food are as iconic in the Philippines as the sorbetes.  It and the person peddling it have both been immortalized in song.  Not just reserved for children, sorbetes is for anyone who needs to satisfly a craving for sweets or is looking for a quick snack.  Sorbetes is the traditional variation of ice cream made in the Philippines. It is distinct from the similarly named sorbet. Peddled by street hawkers, it is usually served with small wafer or sugar cones and more recently, bread buns. It is uniquely made from coconut milk, unlike other iced desserts that are made from animal milk. Sorbetes is peddled by sorbeteros using colorfully painted wooden carts which usually can accommodate three flavors, each in a large metal canister. Peddlers get their carts from makers scattered around the cities of the Philippines in the morning and walk the streets the whole day, calling consumers from their houses by ringing a small handheld bell. The wooden cart has two large wooden wheels at the front part to easily push the cart though latest carts are already attached to bicycles. The cart is stuffed with shaved ice sprinkled with salt to produce a lower temperature around the metal canisters and keep the sorbetes frozen longer. The whole sorbetes cart is also available for private gatherings when negotiated with the sorbetero. It is usually cheaper than buying gallons of ice cream to be served to guests.

Peddlers of sorbetes provide several serving options. It may be served in a small plastic cup, a wafer cone, a sugar cone or a bread bun, at varying prices. A serving can include one flavor or, for no extra charge, a mixture of available flavors.