Banaue: Stairway to the Skies

Banaue's town center is not a particularly attractive place but is the perfect base for travel to the rice terraces in the poblacion, to Batad, Hapao and other nearby villages. 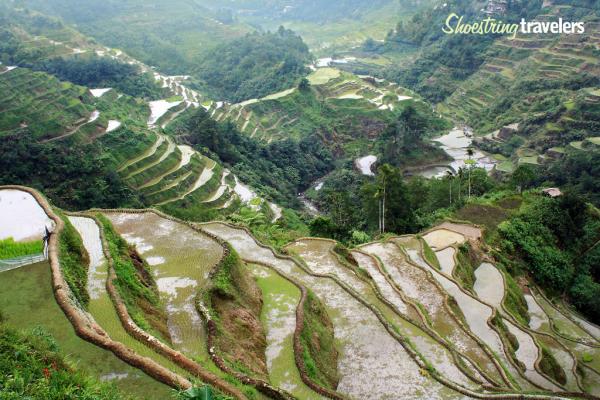 You may also check these:
https://shoestringtravelers.com/?q=node/38

After seeing Banaue’s rice terraces in postcards, travel guide books and even elementary social science textbooks, I have always dreamed of visiting the place some day. Nina and I had lived in Baguio City for a few years and initially we thought Banaue was relatively near only to discover that it was a good six hours away via the Ambuklao Road and nine hours via the Halsema Highway. Due to the nature of our work we had traveled extensively throughout Southeast Asia while based in Baguio but never did we set foot in Banaue.

I finally got the opportunity to go recently and just in the nick of time – a typhoon hit the northern provinces right after our return trip back to Manila from Banaue (in May!). Arriving by bus on a Sunday morning after a long night trip, we headed off to a restaurant at one of the inns just beyond the market for breakfast. Banaue’s town center is not a particularly attractive place but is the perfect base for travel to the rice terraces in the poblacion, to Batad, Hapao and other nearby villages. We would head immediately for Batad after breakfast and stay there overnight. The rice terraces in the Banaue poblacion or town proper would have to wait until we came back the following day. 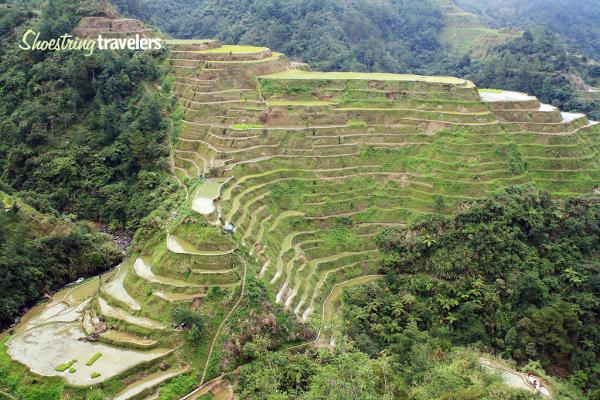 The road to Bontoc has several vantage points for viewing the rice terraces of Banaue.

The terraces in Banaue town proper are the most famous of all the terraces in the Cordilleras. They are spread out all over the municipality. On the road to Bontoc are several vantage points for observing the beauty of these terraces but the perfect place to see them is the Viewpoint located some three kilometers north of the Banaue town center and also along the road to Bontoc. You can walk the distance to the Viewpoint or ride a tricycle or jeepney. We took a ride as expected. The views of the rice terraces from the Viewpoint and adjacent areas are the ones we often see in postcards, books and the P1,000 bill. 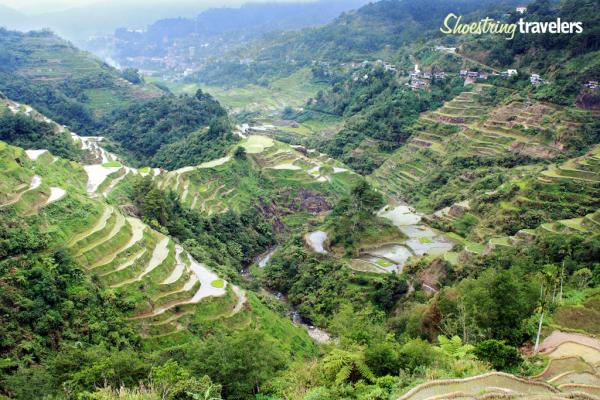 A familiar site at the Viewpoint.

Gazing at these terraces one can’t help but imagine the backbreaking work done by the Ifugaos as far back as 2,000 years ago to carve and fill in the mountain slopes using bare hands and crude implements. The fact that they are still in use today, unlike the other great wonders of the world, serves to further enhance their reputation as a colossal engineering feat by the hardy people of the Cordilleras. It has been said that if the terraces in Ifugao were laid from end to end they would circle almost half the world’s diameter. 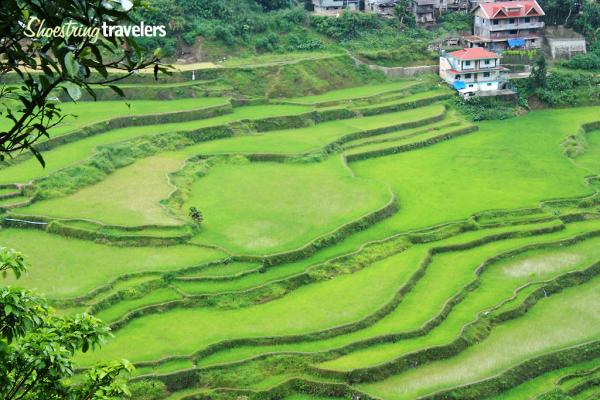 The presence of modern structures near the terraces in Banaue is probably one
of the reasons they did not make it to the UNESCO World Heritage List.

Sadly there are signs that some of the terraces are now eroding and need maintenance. We observed a few terraces that were not being cultivated anymore and which were getting overgrown by shrubs. Probably because they are less productive, these terraces have fallen into disrepair and disuse. Among the natives, many of the younger generation are moving into bigger cities for better opportunities. And who can blame them? For now however, only a small portion of the terraces are showing signs of deterioration so that the beauty of these stairways are still for us to enjoy. 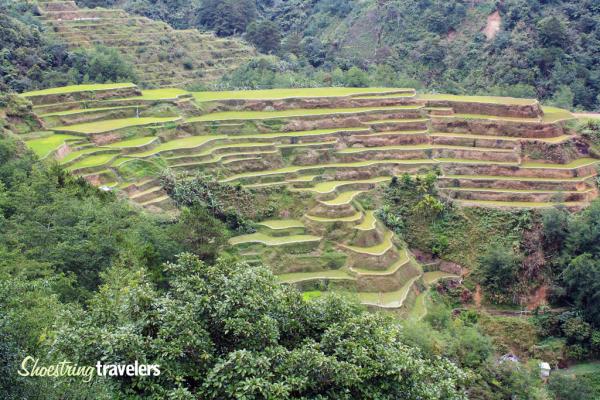 Some terraces at the outer rim have fallen into disrepair but as a whole the Banaue rice terraces are still an impressive sight.

As beautiful as the Banaue poblacion terraces are, they are not, contrary to popular opinion, on the list of UNESCO’s World Heritage sites. However, the clusters of terraces at nearby Batad and Bangaan (both in Banaue), Mayoyao, Nagacadan (in Kiangan) and Hungduan (including the Hapao terraces) were declared UNESCO World Heritage Sites in 1995. (Take a look at the Batad terraces to see for yourself why.) All these terraces are in the province of Ifugao. The modern structures that have sprouted up along the edges of the Banaue poblacion terraces have probably prevented them from securing a place on that prestigious list. There are other points of interest in Banaue including the sitio of Matang-lag near the road to Batad. Matang-lag is famous for its bronze smiths. One can also try the Guihod Natural Pooland the Poitan Village where one can see a real-life demonstration of carving and weaving. We opted to go to Hiwang to view the native huts and yet another viewpoint where one can have a panoramic view of the terraces not only in Banaue but in other adjacent places as well. We were surprised by human skulls displayed outside the native huts until we were told that they belonged to World War 2 Japanese soldiers killed in the fighting here in 1945. The town center also has shops selling woodcarvings and wooden furniture.

If you’re travelling by car from Manila, take the North Luzon Expressway and exit at Sta. Rita Bulacan to go all the way to Solano, Nueva Vizcaya through the Maharlika or Pan Philippine Highway. You’ll pass through Cabanatuan and San Jose, Nueva Ecija, cross the Dalton Pass at Santa Fe and drive past Bayombong, Nueva Vizcaya before Solano. The highway goes on to Bagabag past Solano. At Bagabag look for the road going to Banaue (the Bontoc highway). You’ll pass by Lamut and Lagawe before reaching Banaue town proper. Banaue is about 370 kilometers from Manila.

I know experienced drivers from Baguio who take the Halsema Highway that goes through La Trinidad, Benguet north to Bontoc. (You can take a nice side trip to Sagada on the way.) From Bontoc they then take the road that heads south to Banaue. Driving along the Halsema Highway is complicated by the lack of guide rails, foggy conditions and unpaved portions. The highway is considered one of the most dangerous not just in the Philippines but in the world but also possesses probably the best scenery anywhere else in the country. The safer, albeit longer route would be to drive down to Villasis in Pangasinan. From there take the road to San Jose, Nueva Ecija then on to the Maharlika Road to Bagabag, Nueva Vizcaya before taking the road to Bontoc at the junction. If you’re going by bus there are Dangwa buses that go directly to Banaue from Baguio.

From Manila the only bus now going direct to Banaue is Ohayami Trans with buses leaving for Banaue from their terminal at the corner of Fajardo and Lacson streets in Sampaloc. Buses leave at 9 and 9:45 PM every day. Apparently there is more than one bus leaving at the same hour. The trip normally takes 8 to 9 hours.

The best time to see the terraces is between February and towards the end of May, when it is least likely that the views will be obscured by fog or clouds. We went in May just in time to see the rice stalks beginning to turn to a golden yellow, although several terraces in Banaue had already seen harvest time by then.