Batalay Shrine: The Story of the Augustinian Priest, Holy Cross, and Holy Water

The site is where the first cross was planted in Catanduanes and was built over the burial place of Augustinian priest Fray Diego de Herrera who died in barangay Batalay in 1576. A spring of clear water sprouted near the cross, believed to have healings powers, which the natives regarded as an unusual phenomenon.

The site is where the first cross was planted in Catanduanes and was built over the burial place of Augustinian priest Fray Diego de Herrera who died in barangay Batalay in 1576. A spring of clear water sprouted near the cross, believed to have healings powers, which the natives regarded as an unusual phenomenon.

Another legend says that the death of Fray Diego de Herrera brought supernatural punishment to the natives for killing a holy man. The punishment was in the form of school of swordfish, which attacked and killed many of the natives. The survivors retreated inland, some finally settled near the Bato River and the others went back to Batalay after the incident. After many years, from 1840 to 1860, Bishop Grijalvo of Nueva Caceres ordered a monument to be constructed over the grave of Fray Diego de Herrera, the site of which could not be located. It took many attempts to plant a cross on the right spot because no cross would stand, it was noted to be uprooted every sunrise, when finally one morning the cross did not fall to the ground, which caught the natives in surprise. The natives dug beneath where the cross stood and found a human skeleton supposed to be the remains of the famous martyr. From then on, pilgrims placed the cross on the pained parts of the body, others brought with them oil, and many came with empty bottles to be filled with the miraculous water from the spring. Today, an unfinished shrine stands on the occasion of the fourth Centennial Celebration of the death of Fray Diego de Herrera. A decree was signed, declaring the Holy Cross of Batalay a Doicesan Shrine with the right to hold a Liturgical celebration on the last Friday of April of every year. Thus, Batalay, Bato, Catanduanes became a historical landmark. 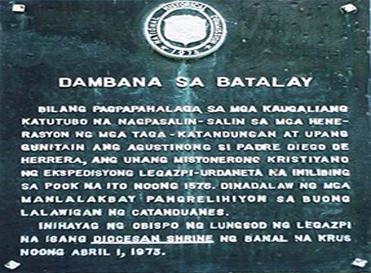 The shrine is located at barangay Batalay in the town of Bato, Catanduanes.