Biliran is a rugged, hilly island and to maximize their resources, the province’s inhabitants made liberal use of terracing and a plentiful supply of water to become self-sufficient in rice production. 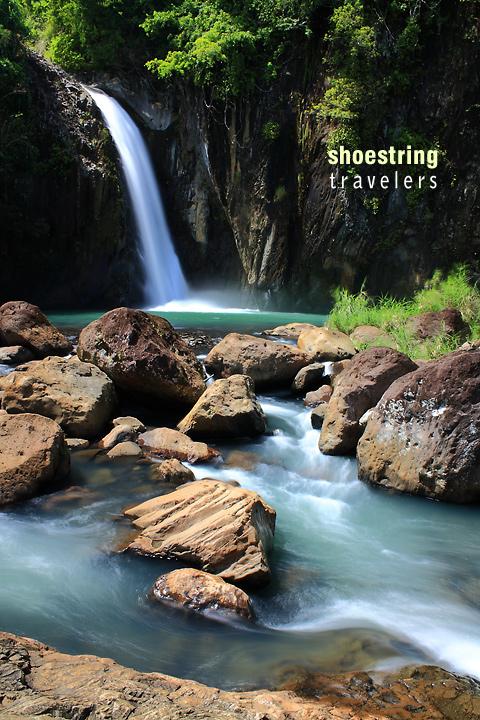 You may also check these:
https://shoestringtravelers.com/?q=node/58

Sweating profusely as we made our way down the steep slopes made muddy in some parts by continuous rains days before, I tried to put away thoughts that we may not be able to make it back up in one piece. It was hard enough hiking down the winding, slippery path and trying not to slide accidentally down the precipitous cliffs to our right.

A short while later, however, we were greeted by the welcome sound of rushing waters. Soon the first waterfall on our itinerary, the Bagongbong Falls, partly hidden by huge rocks, came into view. Located in Almeria, Biliran, Bagongbong is just one of the many scenic waterfalls in this island province. My friend Oggie and I had one whole day to tour at least two of them and many more of Biliran’s scenic spots in between.

To get to Bagongbong Falls we rented a habal-habal or motorbike for two people with a driver (don’t bet on getting helmets for the ride though; most of them don’t have any, unfortunately). We also got a guide to go with us. Bagongbong is located in the hills above Almeria and to get there we drove initially along the scenic coastal road from Naval. In a few minutes the bright green rice fields along the coast gradually gave way to terraced fields in the hills of Iyusan, still in Almeria town. It may not compare to Batad, Banaueand the other majestic rice terraces of Ifugao, but Iyusan’s terraces are still a sight to behold. The golden yellow stalks glistening in the sun indicated that harvest time was near and that we had just arrived in time to view the terraces at their most beautiful. 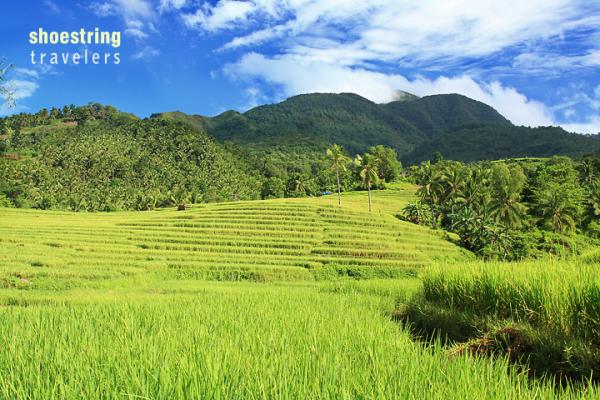 Biliran is a rugged, hilly island and to maximize their resources, the province’s inhabitants made liberal use of terracing and a plentiful supply of water to become self-sufficient in rice production. The province also has the highest yield per hectare in rice production in the Eastern Visayas, proof of the industrious character of its people.

But back to our original destination: the Bagongbong Falls. The concrete road through Almeria’s rolling hills came to an abrupt end just before a forest clearing and we had to leave our motorbike and driver. Soon we were hiking down a narrow trail that turned muddy and slippery in some parts. We had to remove our slippers for better traction at one point but fortunately the trek wasn’t that long. The falls were at the bottom of the trail but we still had to cross an onrushing stream on moldy rocks to get a better view. My half-century old knees were still trembling from our muddy descent but fortunately our guide Zaldy and his cousin Nestor were there to help Oggie and me cross the stream with our packs. 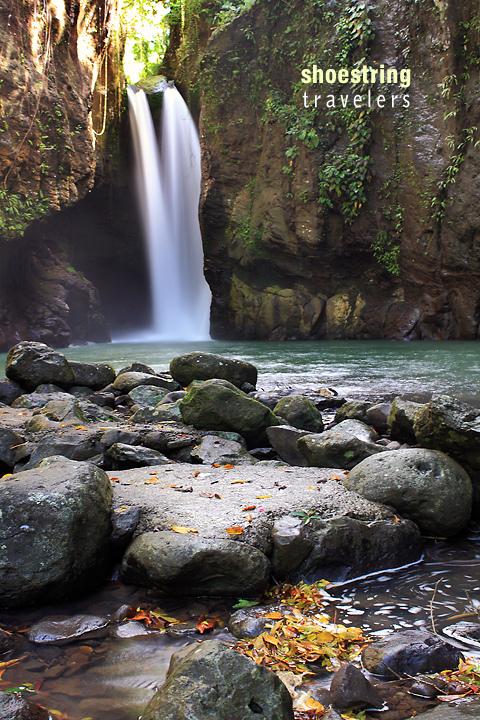 After enjoying the view, dipping in the cool waters and taking several photos, it was time to go back. I thought the ascent up the steep slopes was going to be even more difficult but was surprised that it was actually easier. I didn’t even have to remove my slippers. We only had to stop briefly at some point to catch our breath but otherwise we did not have any problems going back up. A farmer chatting with our habal-habal drivers even gave us several bananas – for free! (Biliran has among the friendliest people I’ve met.) Looking back we felt Bagongbong Falls was well worth the effort we expended on granddaddy knees. 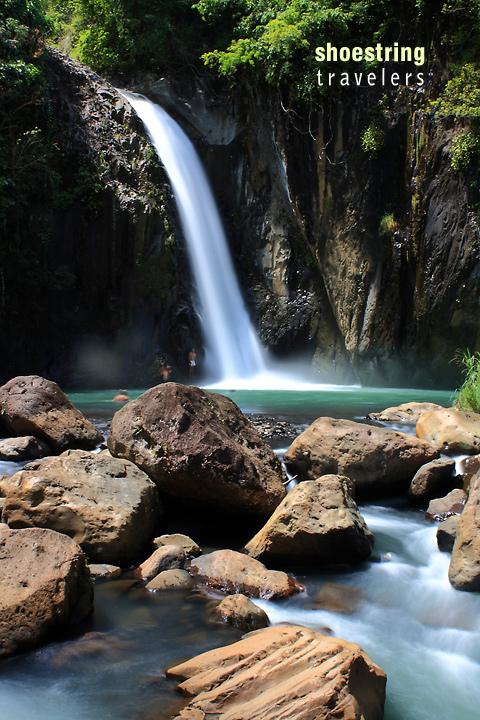 Hidden no more: the Tinago Falls in Caibiran.

From Bagongbong Falls in Almeria we traveled back to Naval on our trustyhabal-habal, had lunch at that town, then continued on to Caibiran town on the eastern side of Biliran island. Zaldy and Nestor told us that we would traverse a cross-country road from Naval to Caibiran so I was bracing for a rough ride. To my surprise the whole route was a concrete, albeit slightly narrow, road. So much for cross-country motor biking. The 30-minute ride was a pleasant one through beautiful scenery of terraced rice fields, gently rolling hills, sleepy villages and cool rainforests. Parts of the road even passed through giant trees at the edge of a forest that briefly shaded us from the afternoon sun. A very short trail, also cemented, led from the main cross-country road to the entrance to the falls. The 90-feet falls is surrounded by lush green foliage and drops down into a pool of big rocks that made for excellent photo opportunities.

Other Waterfalls in Biliran

Bagongbong and Tinago are among the easiest waterfalls to reach in Biliran but for the intrepid traveler there are many more. Besides Bagongbong are Ulan-ulan, Recoletos and Sampao Falls – all in Almeria. Our guide Zaldy said that the last three named are much more difficult to reach but that Ulan-ulan is probably the most beautiful in the whole of Biliran. Having seen pictures of Ulan-ulan before, I couldn’t agree more.

Tomalistis Falls in Caibiran has reportedly made it to the Guiness book of records for the “sweetest” water. And then there’s the Casiawan and Kasabangan Falls, both in Cabucgayan town. Both falls are located in dense jungle undergrowth and the hike to get to them is an adventure in itself. I had wanted to go to Casiawan but backed off when we learned about the steep trails we had to traverse to get there – all probably slippery because of the heavy rains in previous weeks.

Both Bagongbong and Tinago Falls can be toured in less than a day on ahabal-habal from the capital of Naval with an additional hike in the case of Bagongbong. We paid P500 for one habal-habal with driver (good for two passengers) although we added P50 more partly due to the recent increase in gas prices. We also took along a guide Zaldy Cornito who has accompanied mountaineers making forays to Biliran’s harder to access falls and highest peaks (Zaldy has already been to Mt. Apo). He can be reached at this number: 0917-6937146.