Caramoan has improved somewhat, getting there still proved to be an adventure in itself. But you soon forget all the difficulties in traveling once you immerse yourself in the beauty of the place. 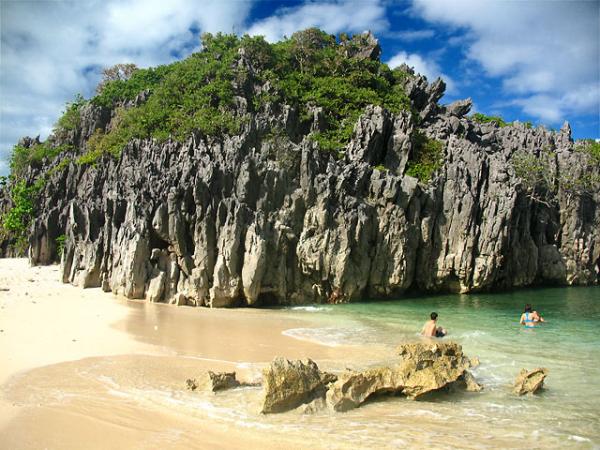 We first learned about the Caramoan Peninsula in Camarines Sur through an international travel guide book sometime around 2003 or 2004 when it was largely unknown to local tourists. The travel book described a rugged, pristine and beautiful landscape so remote it was only accessible by boat. (Funny why it seems foreigners are always the first to know about such tourists spots in your own country.) Caramoan burst into the scene in 2008 when it was selected as that year’s site for Koh Lanta - the French version of the reality television series Survivor. Since then it has increasingly become a favorite destination for local and international visitors alike. 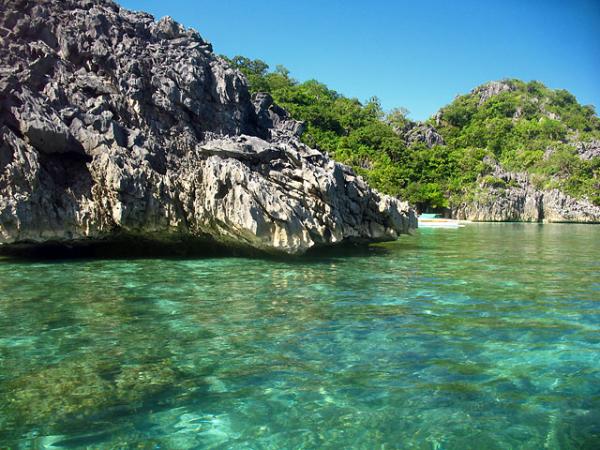 Having dreamed of visiting Caramoan since 2006 and wanting to see the place before it goes the way of overdeveloped places like Boracay, we invited some of our shoestring traveler friends to experience this paradise. While travel to Caramoan has improved somewhat, getting there still proved to be an adventure in itself. But you soon forget all the difficulties in traveling once you immerse yourself in the beauty of the place. 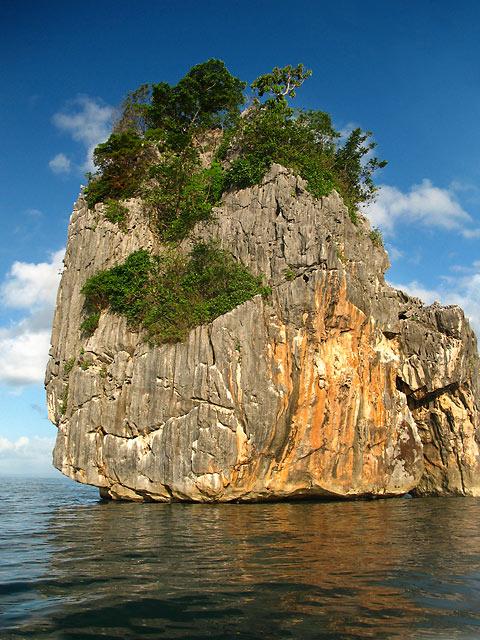 Truly a shoestring traveler’s paradise, the Caramoan peninsula is located at the eastern part of Camarines Sur facing Catanduanes. The coastal portions are accessible by land in the dry season but one has to use a 4x4 vehicle to traverse the rough roads of the hilly interior. Otherwise you take a two-hour boat ride from Sabang port to the town of Caramoan itself – which any shoestring traveler like us did. The Caramoan National Park has caves, waterfalls, an islet lake, a subterranean river and a ruggedly beautiful coastline with white sandy beaches, limestone karst formations, serene lagoons and clusters of islands. A multitude of activities await visitors such as island hopping, snorkeling, diving, trekking, rock-climbing, kayaking, camping and spelunking. It was the coastline with its beaches, lagoons and islands that we came to explore during our shoestring traveler 3-day stay.

We arrived by boat at Guijalo Port in Caramoan town. With crystal clear turquoise waters and white sandy beach coves located on both sides of the pier, this is one of the better-looking ports in the country that we’ve seen so far. From there we traveled by jeep through the town of Caramoan and on to Paniman beach where our resort is located. Paniman was also our jump-off point to the islets and beaches in the Caramoan peninsula. It took us two days to explore the major tourist draws in Caramoan and even then there were still a good number of places we missed. We are definitely looking forward to a return visit. Here’s a rundown of the places we visited: 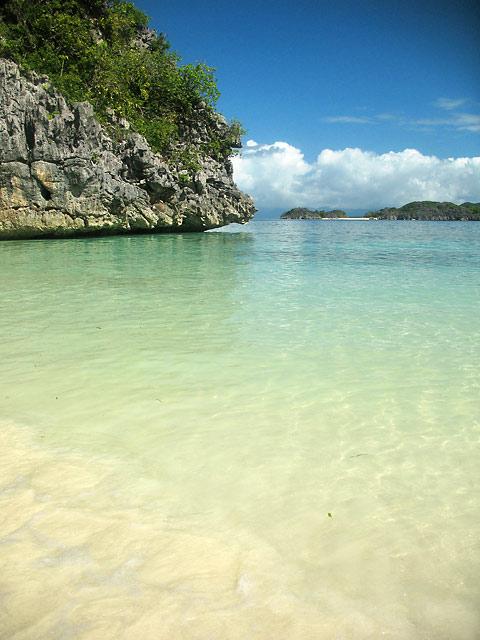 Matukad Island. Less than 30 minutes by boat from Paniman beach, this postcard-perfect island is a favorite location for the Survivor series. Limestone karst formations, a white sandy beach and crystal clear, jade-green waters make Matukad the ideal shoestring traveler’s island. The sand appears white from a distance but turns out to be pinkish-white on closer inspection. It’s also very fine – almost like Boracay's famed talcum powder-like sand. The waters around Matukad are shallow out to several meters from the beach and therefore ideal for swimming. It’s the perfect place for beach bumming and picnicking. We tried snorkeling here but couldn’t see a lot of marine life. It seems that much of the coral cover has been damaged by illegal fishing (sigh). Our boatman suggested we climb the limestone rocks at one end of the island to see a hidden lagoon. Leo took one look at the almost vertical rock walls and wisely declined. 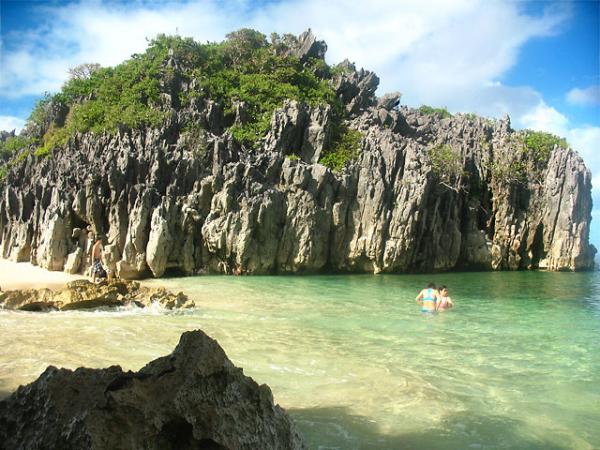 Lahos Island. Just a short boat ride away from Matukad, Lahos Island is another of Caramoan’s fast-becoming popular attractions. The island is composed of two major limestone clusters separated by a narrow piece of sloping white sand beach with jade-green waters on both sides. The sand isn’t as fine as Matukad’s but it’s still pinkish-white. What made this place interesting is that while the waters on the side of the beach facing the Caramoan mainland were serenely calm, a strong surf was pounding the the opposite side of the island facing the Pacific Ocean. Just as in Matukad, we had a lot of fun with our shoestring traveling friends swimming on both sides of the sandy beach. 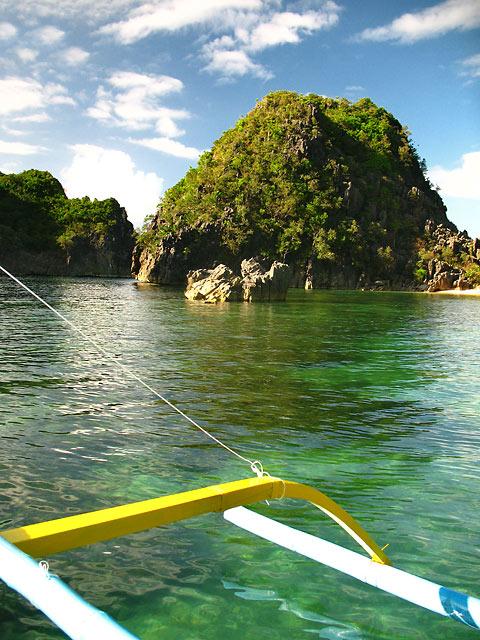 Tinago Cove. As its name suggests, this cove is hidden from view when traversing the length of the Caramoan peninsula coastline, unlike the more popular Gota and Hunongan beaches. It is however accessible from the sea via a narrow passageway among the huge limestone karst formations dotting the coastline. This was our third stop on our first day of island-hopping after Matukad and Lahos Islands. Tinago Cove is actually a lagoon, being completely surrounded by the now-familiar tall limestone cliffs. The waters leading to the narrow passageway among the limestone cliffs were somewhat rough but once you’re inside the cove the waters become very calm. There are two small sandy beaches inside Tinago where boats can dock, making them ideal for picnics. 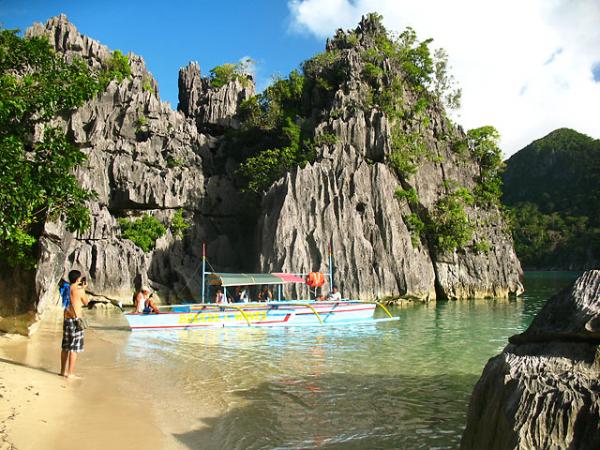 The limestone cliffs at Minalahos Island

Minalahos Island is within easy distance of the resort at Hunongan Cove. It’s almost similar to Matukad and Lahos Islands with its white sand beach and limestone karst formations. The only difference is that the limestone rocks are much taller and more imposing. The beach area facing Hunongan is an ideal place for swimming. The opposite side looked interesting as well but we were too tired by then and in no mood to do more exploring.

Hunongan Cove boasts a gently sloping white sand beach and a newly constructed resort run by the provincial government. Easily visible across the narrow channel from Minalahos Island, it adjoins nearby Gota Beach and like the latter has a backdrop of towering limestone cliffs that add a majestic feel to the place. We only passed by this place after our visit to Minalahos Island and did not attempt to land on the beach which was now occupied by the newly-built resort. We have seen previous photos of Hunongan by bloggers who frolicked on this beach and nearby Gota when both places were still deserted but those pictures seem a distant memory now. Hopefully the local government and the people of Caramoan would be able to minimize the environmental impact of tourism development.

Matukad, Lahos and Minalahos Islands, Tinago Cove (as well as Gota Beach and Hunongan Cove) are all located close to and east of Paniman Beach. We were able to visit all these places on our first afternoon in Caramoan. Our boatman offered to take us to a cave close to Paniman but because we were already too tired (we had hardly slept on our bus the night before), we decided to call it a day and returned to our resort. On our second day we visited the islands west of Paniman.