Cavite: The Historical Capital of The Philippines

The province of Cavite abounds with historic sites and landmarks; museums, world class golf courses, outstanding gardens and facilities for leisure. It is the birthplace of a number of Filipino heroes and it has an interesting range of sites associated with the Philippine Revolution. Found in the province is the residence of the first president of the Republic, Gen Emilio Aguinaldo, which was also the site of the proclamation of independence from Spain on June 12, 1898. 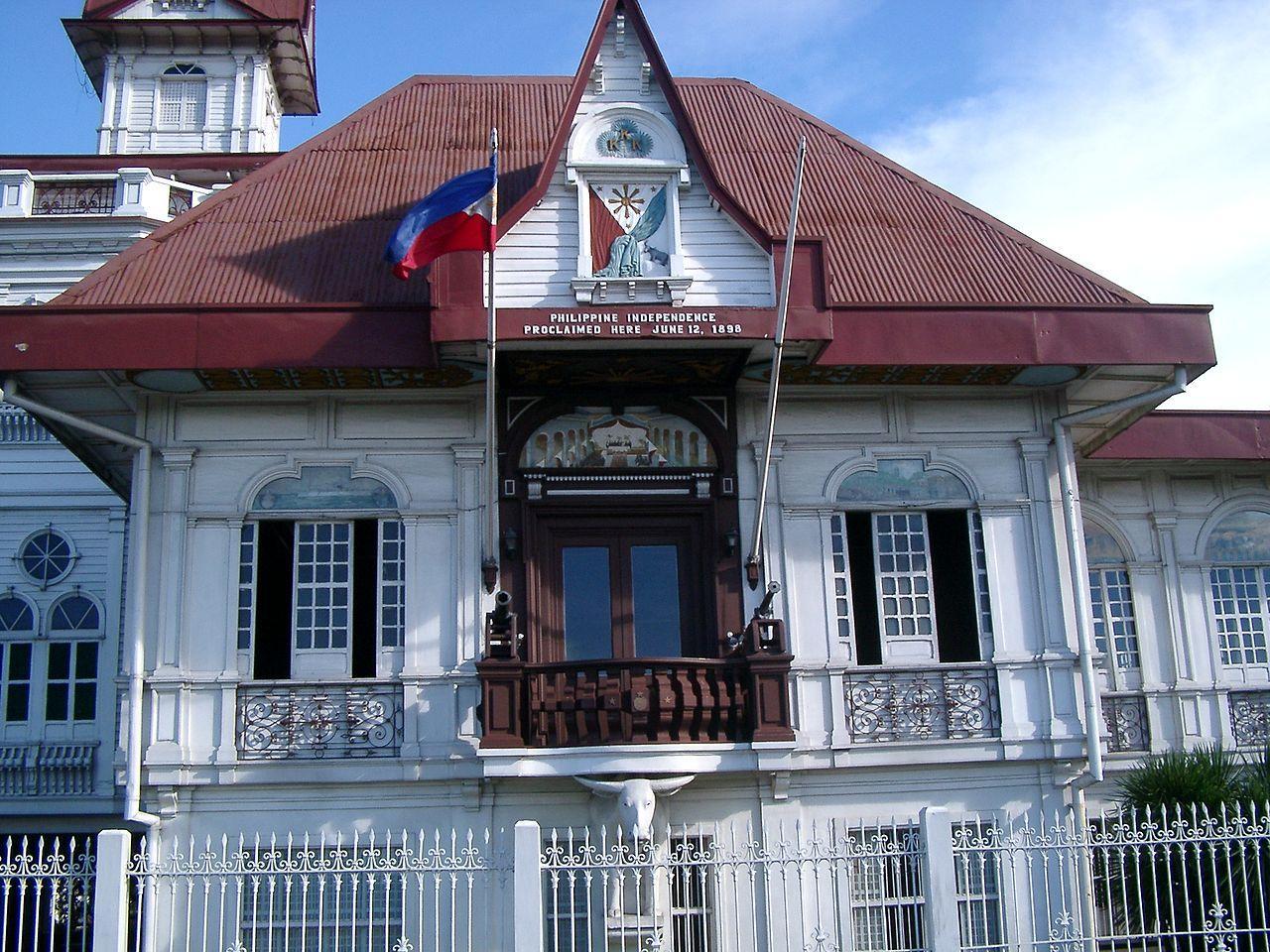 The province of Cavite abounds with historic sites and landmarks; museums, world class golf courses, outstanding gardens and facilities for leisure. It is the birthplace of a number of Filipino heroes and it has an interesting range of sites associated with the Philippine Revolution. Found in the province is the residence of the first president of the Republic, Gen Emilio Aguinaldo, which was also the site of the proclamation of independence from Spain on June 12, 1898.

Cavite teems with natural resources and unique landscapes. It is home to Tagaytay City, which is situated 2,500 feet above sea level and is a popular summer and holiday destination. The highway drive offers a breathtaking sight of the world-famous Taal Volcano and Lake which is a crater within an island within a lake. Vegetation dots the ridges of Tagaytay with a wide range of accommodation establishments and restaurants for tourists to savor the pleasures of leisure and relaxation with a magnificent view of Taal Lake and Volcano. With its interesting beauty, history and culture, Cavite take its part as chief participant in the enhancement of tourism in the Philippines.

Cavite got its name from the Filipino word Kawit, which means hook, owing to the hook-shaped mass of land recorded on the old Spanish maps. The land formerly known as Tangway was the site of a Spanish colonial fort on which the city of Cavite rose. Archeological evidence in coastal areas shows prehistoric settlements. According to historical records, the earliest settlers of Cavite came from Borneo. In the 1600s, encomiendas or Spanish royal land grants were given in the towns of Cavite, Ternate and Maragondon. Jesuit priests brought in settlers from Moluccas. These people known as Mardicas, settled in the above-named sites.

Other settlements grew during the Spanish era and by the turn of century; Cavite’s progressive towns were already trading with Manila and with one another. Traditional industries began to thrive as Manila’s commerce grew.

In 1872, Filipinos launched their rebellion against Spain. Three Filipino secular priests, Jose Burgos, Mariano Gomez and Jacinto Zamora, were implicated in the Cavite mutiny when 200 Filipinos struck the Spanish garrisons. On August 25, 1896, when the spark of a revolution against Spain broke out, Cavite became a bloody theater of the Philippine Revolution.

Led by Gen. Emilio Aguinaldo, Cavitenos made lighting raids on Spanish settlements and soon liberated the entire province of Cavite. Aguinaldo commanded the Revolution to its successful end, which preraged the proclamation of the first Republic in Asia, the Republic of the Philippines on June 12, 1898 in Kawit, Cavite.

Some attractions that can be found in the Province

The place is found at the bottom of a slope which runs down a steep angle to a brook. Lush greenery surrounds this little valley where Cabag Cave is found. Inside the cave, an underground river runs for about 50 meters inwards. A pool of water is formed immediately off the mouth of the cave leading to the river.

A valley borders the Malicbilic Falls, where boulders cut across the middle of the gushing water that cascades from the falls. At the far end of the river is a NIA irrigation project. The other nearby rivers flow into a large pond, which can be viewed from atop one of the hills. A large pool of water forms at the base of the falls with coconut trees, shrubs and greenery flanking both sides of the falls.

Two falls can be seen in the area, one of which naturally flows with gushing water, while the other is outfitted with pipes and bamboo tubes to aid the flow of water. The falls converge into a pool of water with a deep part for adults and a shallow portion for children.

Ulong Tubig is a pool formed by natural spring water emanating from adjacent hill. The pool leads to an irrigation pump which supplies a vast number of rice fields in Carmona. The area is shaded by coconut trees and other vegetation.

On June 12, 1898, Gen. Emilio Aguinaldo of the Filipino revolutionary forces declared independence from Spanish rule on the balcony of his residence in Kawit, Cavite. The house is declared as a Shrine and houses the memorabilia dedicated to these historic events. In 1998, a park named Liwasang Aguinaldo was built in front of the house to celebrate the Centennial of Philippine Independence.

This was the site of a significant encounter between Spanish forces and Filipino revolutionaries from November 9-11, 1896 wherein hundreds of Spanish soldiers were killed. It was the most decisive battle of the revolution as it marked the first defeat of the Spanish forces and is commemorated as the first major victory of the Philippine Revolution.

Gen. Candido Tirona, a trusted aide of Gen. Emilio Aguinaldo, was the first Capitan Municipal in the Philippines. He was instrumental, together with the revolutionaries in the successful defeat of the Spanish forces led by Gen. Ramon Blanco.

It is a museum composed of moving tableaus that take the visitors back through time, to relive historical scene with realistic life-size figures set amidst painstakingly recreated settings. Interpersed between these tableaus are colorfully detailed murals and relief sculptures of key figures in the Cavite Revolution, as well as fascinating tidbits such as the official seal of the Magdalo and Magdiwang factions of the Katipunan, the full text of Governor-General Ramon Blanco’s Declaration of War in the eight provinces that rose in 1896, and an official tally of the deployment of Spanish troops and ordnance.

The Museo ng Tagaytay aims to collect and preserve all significant artifacts, photos and memorabilia of the City of Tagaytay and its people as well as to record momentous events reflecting the growth, development, culture and heritage of the city.

The church altar is enhanced with various ornately-carved statues of Catholic saints set upon a multi-tiered, wooden carved platform. The church dates back to the Spanish period. The altar design is remarkably similar to that of Silang Catholic Church.

Of 17th century vintage, the Maragondon Catholic Church was built by the Dominican friars. It has a well preserved convent made from antique Philippine mahogany, masonry and bricks. The wooden altar, pulpit and main portal are finely crafted and remain as the enduring architectural landmarks and enhancement of the church.

The church is an example of Hispanic colonial architecture and exudes an ambience conducive to monastic life and spiritual meditation. The colors have darkened with time but one will notice the red colored bricks that make up the arches and walls of the place endure to the present day. Latin inscriptions accentuate the arches of the church. The Cathedral is the seat of the Diocese of Imus.

Cavite is home to some of the finest golf courses in the country. Tee off on world-class links at the Manila Southwoods, Eagle Ridge, Puerto Azul, The Orchard, Royale Tagaytay, Sherwood, Riviera Splendido, Highlands and Midlands Golf and Country clubs. Most of these clubs are exclusive to members and visitors can play when accompanied by a member.

Cavite is the perfect destination for travelers who can experience a glimpse of the historical, natural and man-made attractions of the province nearest to Manila. Drive around the Tagaytay-Taal Ridge to view the spellbinding concert of volcano, lake and sky through an oftentimes foggy mist. For the religiously inclined, take a round of old monasteries and churches. Take a hop around historical sites, monuments and culminate in the island of Corregidor and other resorts around the province.

Engage in outdoor sports like golf and horseback riding at Tagaytay City and pony rides for the kids. For quieter afternoons and evenings, watch cultural shows at the Taal Vista Hotel and other local folk theaters during holidays and weekends.