The eastern and northern sections of the island's shores, facing Tambobong Beach, are carpeted with creamy white sand with large pebbles and coral rocks scattered throughout.

You may also check these sites:
https://shoestringdiary.wordpress.com/2015/06/26/colibra-island-cabacungan-cove-rediscovering-dasols-beaches-2/

Leaving Balinmanok we proceeded to Colibra Island. This location is sometimes spelled Culebra and is also called Snake Island for the highly poisonous sea snakes that used to make the island their home. Colibra is easily visible from Tambobong Beach with its thick deposit of fine white sand and four lanky coconut palms scattered throughout. Colibra can be reached within 30 minutes from Tambobong Beach. 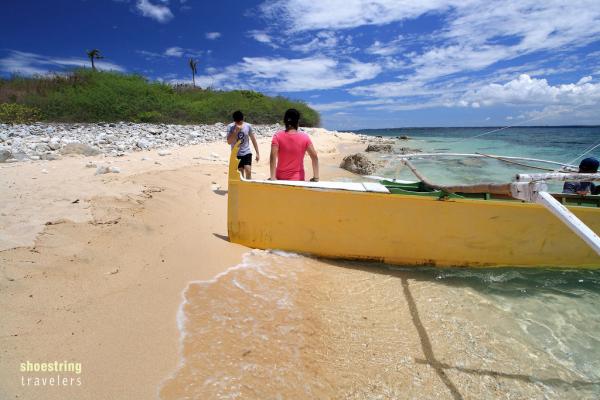 Touching down at Colibra Island.

Colibra is a small island and may be circled on foot in less than 15 minutes. The eastern and northern sections of the island's shores, facing Tambobong Beach, are carpeted with creamy white sand with large pebbles and coral rocks scattered throughout. Crystal-clear waters surrounded the whole island. We spent a good portion of our time swimming and snorkeling in the eastern section of Colibra. We also noticed that even in summer it seems the waves are pretty strong. A glance at the map shows why; Colibra Island happens to be located in the open West Philippine Sea, just outside the shelter of Dasol Bay. So this was the reason why no boat would dare venture out here during the amihan season four years ago. 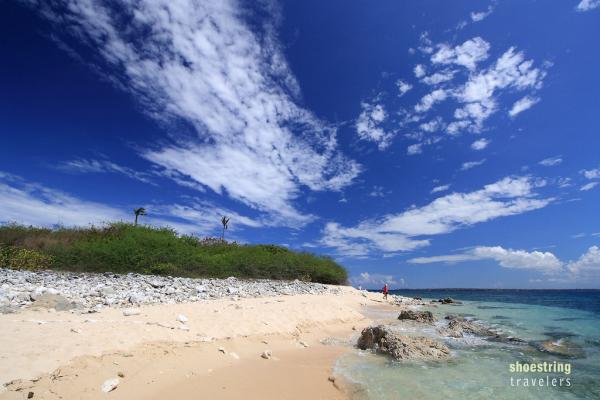 With just four, widely-separate coconut palms, the island practically has no shade except for a dense thicket of shrubs in the eastern and central sector. Here we saw at least two groups of visitors using the shrubs as a shade while grilling their food. It seems that the locals are regularly using this as a picnic area. The southern section of the island is dominated by a slightly elevated rock shelf. 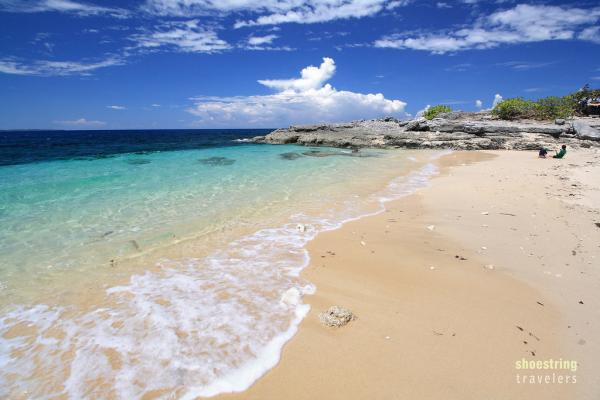 Cabacungan Cove is situated at Balas Nagtaros Island, an islet at the northwestern end of Tamboboong Beach, separated by a narrow channel from the latter. We had visited Cabacungan during our first time at Dasol four years ago, by walking all the way from Tambobong Beach at low tide. At high tide, however, one has to get on an outrigger boat to reach this place. This time around we passed very close to Crocodile Island, so-named because of its resemblance to a crocodile head. This island is a long rock formation and it is not possible to land on it so we simply circled and observed it from the boat. 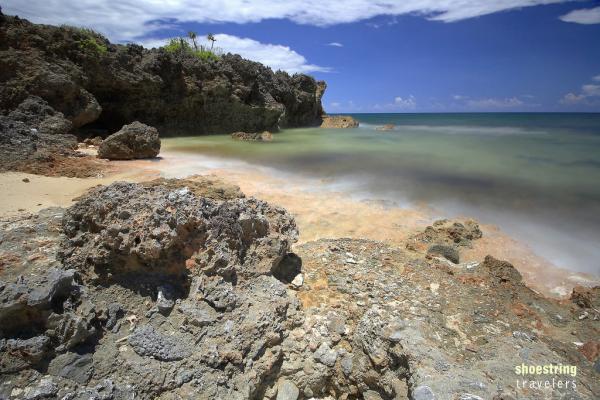 Cabacungan Cove; on the left is an entrance to a small cave leading to the sea on the other side.

Cabacungan is a small cove dotted by rugged rock formations with a beach lined by rust-colored and sun-bleached rocks. At low tide, several tidal pools are formed along the beach, trapping colorful marine animals and making the area good for snorkeling. The high tide and strong waves during our second visit made snorkeling practically impossible. We also had to dock at another side of the island and hike over an elevated area to get here; at low tide boats can dock at the cove directly. The hike to the cove, however, produces panoramic views of the whole area. 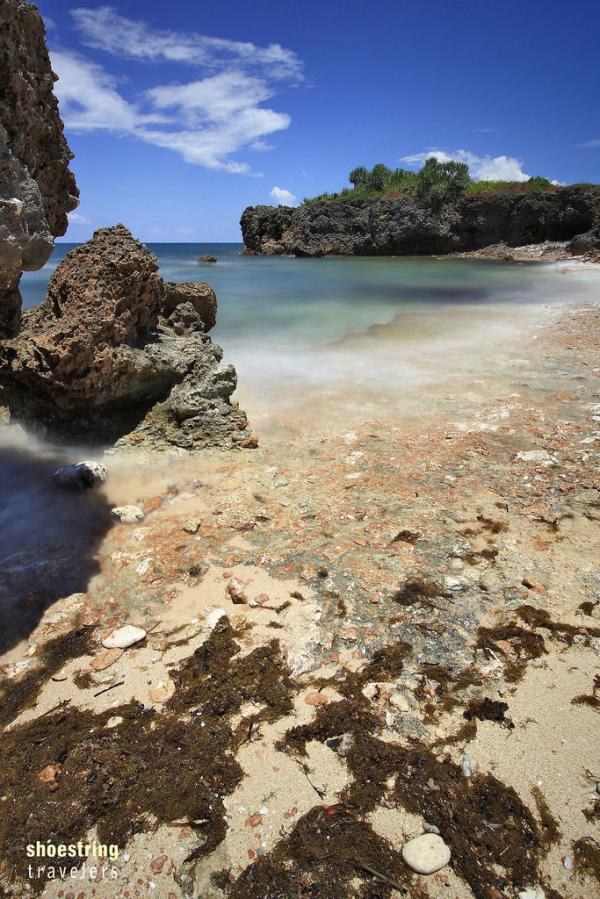 Cabacungan Cove's beach is lined by rust-colored and bleached rocks.

There are no white sand beaches at Cabacungan Cove and the rest of Balas Nagtaros Island. However there is a small cave in Cabacungan that exits into the sea on the other side. There is a small emerald pool inside the cave where visitors dive into and swim when the waves are calm.

How to Get There and Other Tips

Traveling by private vehicle: The good news for car owners is the concreting of most of the roads in the interior to Tambobong Beach. Before, the best way to get there was via Burgos but one can now reach Tambobong from the national highway at Dasol town proper better.

If coming from Metro Manila, take the North Luzon Expressway (NLEX) and continue on to the Subic-Clark-Tarlac Expressway (SCTEX). Exit at Paniqui, Tarlac and take the Paniqui-Ramos Road to Camiling and on to Alaminos. (It's also possible to continue on at SCTEX and take the exit to Urdaneta instead, then continue on to Alaminos via Lingayen. This might be longer but minimizes travel on the interior roads.) Before Alaminos town proper take the short diversion road to Mabini where the main highway goes down south towards Dasol town proper and on to Zambales.

Before reaching Dasol town proper and just before the bridge over the Dasol River is a road on the right that heads straight to Tambobong. We don't remember a landmark for this road so just ask around. This road is newly concreted although there are still a number of small segments that have yet to be paved. A longer road segment of nearly a kilometer in length and somewhere in the vicinity of Sitio Balinmanok was still being concreted when we last visited but should be finished before the end of the third quarter of the year. Otherwise, most of the road is good going, an almost complete turn-around from the previous state of the roads here.

It's also possible to take the route via Burgos town as described in our earlier article on Dasol and Tambobong but you'll have to go through a longer stretch of rough roads, although this route has also been considerably improved. The Burgos route is also longer than the Dasol route. 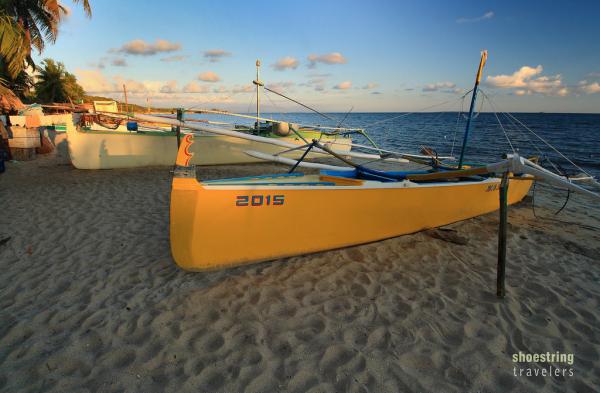 Commuting: Take a bus to Alaminos City; if you're coming from Metro Manila take a Victory Bus liner at Cubao. Travel time is around 5-6 hours. From the terminal at Alaminos City, take a bus going to Sta. Cruz or Olongapo, both in Zambales. Get off at the Burgos town market and hire a tricycle to Tambobong (the fare is around P350 per trike one-way). Some folks have been able to get the lone jeepney that makes the day trip to Tambobong, or as in the case of a group we met, get the jeepeney that ferry supplies to Tambobong. These vehicles make the trip very early in the morning and their time is not always fixed, so most folks when commuting end up on the trikes instead. (Be prepared for a bumpy ride in this case.)

An option to the trikes is to get off at Dasol town proper and get a boat going to Tambobong. This avoids the bumpy ride altogether but costs more (probably at P600 per boat), unless you have many people going with you. It might be possible to take a trike at Dasol town proper to Tambobong (we encountered some trikes on the road there) but we have yet to confirm this.

Resorts: A number of resorts have sprouted up at Tambobong since we last visited. Most are concentrated at the eastern end of the beach but we prefer the less crowded western side (at Tambobong White Beach Resort). You can also check out Villa Balinmanok resort at Sitio Balinmanok, although this is situated away from Tambobong Beach and a little further from Colibra Island and Cabacungan Cove. When you make reservations or check with a resort be sure they are able to prepare meals. Most resorts will gladly cook for you but in some cases you will have to get your supplies from town (Burgos or Dasol). You can buy from fishermen bringing in their fresh catch of the day but this is highly dependent on the weather.

Island-hopping: If you're staying at Tambobong Beach, the destinations listed above should be in your itinerary for island-hopping. Your resort can arrange for this; most have their own boats or have partnered with boat owners. At our resort, the standard island-hopping fare for a 5-person boat is P700 but this did not include Balinmanok. We agreed to pay an additional P100 to add the latter to our itinerary. We actually wanted to go further up north and visit the beaches in Burgos, particularly Cabongaoan Beach, but it seems the smaller boats here in Dasol are not appropriate for that trip.