Every province has its own kinds of festivities. But, there is one festival that is celebrated all over the country – the Flores de Mayo or Santacruzan. 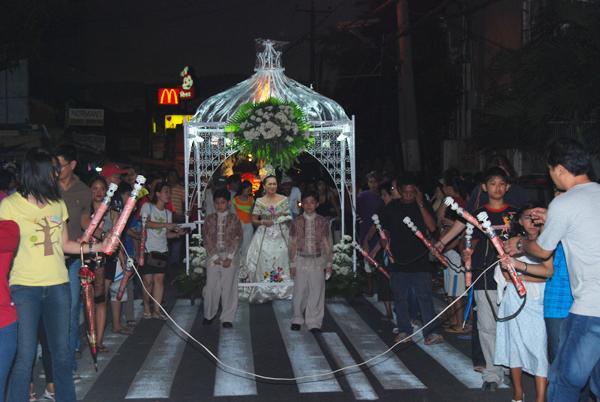 The Philippines is a melting pot of cultures and traditions. Because of our country's colorful history, from the pre-Spanish colonial period up to the present, we Filipinos are blessed with the ability to adapt to a variety of cultures and incorporate foreign ones into our own. This unique blend of different lifestyles and cultures are shown in our many festivals. Every province has its own kinds of festivities. But, there is one festival that is celebrated all over the country – the Flores de Mayo or Santacruzan.

Actually, Flores de Mayo and Santacruzan are two different traditions, although a lot of people mistake them to be similar. They are often celebrated together anyway, plus the true traditions are already lost in the different changes brought by modernization, so patrons and devotees always treat the two as interchangeable.

Flores de Mayo, a Spanish phrase that literally means "Flowers of May", refers to the offering of numerous flowers to the altar of the Blessed Virgin Mary. It is done every day all throughout the month of May. This ceremony is often accompanied by the singing of a local song entitled “Tuhog na Bulaklak”.

Santacruzan, on the other hand, is a lavish festival celebrated by the Catholics and Aglipays – a Christian denomination in a form of a national church, founded in the Philippines – as the highlight of Flores de Mayo. It is the depiction of Saint Helena and Saint Constantine's search for the cross of Jesus Christ in Jerusalem. Ladies in long Philippine gowns, together with their escorts wearing Barong Tagalog (men's traditional clothes in the country), walk in procession along the streets. The town's parish church or the barangay's chapel is usually the starting and ending point of the procession.

Tracing its origins to Europe, Flores de Mayo is celebrated in May – as the name implies – because it is the spring season in European countries. Fresh and blooming flowers are offered to the Virgin Mary, usually by children immersed in the Christian faith. This is their way of giving thanks and honor to the Most Blessed Mother of God.

Santacruzan was also introduced by European colonizers, particularly the Spaniards. According to popular legend, St. Helena, the mother of Constantine the Great, went to Calvary 300 years after Christ's death to search for His cross. At the site of the crucifixion, she unearthed three crosses, and had her sick servant lie down on each one. Upon touching one of the three, the servant was cured; this cross was determined to be Christ's.

The Santacruzan procession seems to have been derived from the traditional Tibag (from the Tagalog word meaning to dig or excavate) – a combination of game, play, and procession as a devotion to the Holy Cross. Celedonio G. Aguilar (1994), in his book Readings in Philippine Literature, explains that Tibag is usually held on the eve of a town feast. The townspeople gather for a procession to look for the cross that was previously buried in one of three mounds on a hill. The procession is led by two persons portraying Saints Constantine and Helen. Upon digging up the cross, the procession proceeds to the church where the climax of the play (dialogues and verses exchanged by the key characters) is performed. (Aguilar, 1994)

For the whole month of May, devotees gather at the church to give flower offerings to the altar of Mother Mary. People celebrate Flores de Mayo as gratitude for the refreshing rain, blooming flowers, and growing crops. They also ask the Blessed Virgin for a bountiful harvest. The offering is accompanied by the singing of Marian songs and praying of the rosary or the novena.

On the last day of Flores de Mayo is the famous Santacruzan. Pretty ladies are chosen to represent various characters in the commemorative parade and they are escorted by handsome young men. The ladies wear fabulous Filipiniana gowns while the guys wear Barong Tagalog. They walk under a bamboo arc decorated with flowers. Of course, Reyna Elena (Queen Helena) is the highlight of this event. Her escort is a young boy portraying Constantine the Great. Devotees follow the parade, holding lit candles, singing songs of praise, and praying the Holy Rosary. Sometimes, there is a brass band or a rondalla accompanying the procession.

The procession is often followed by an evening mass and the offering of flowers. Customarily, a dinner party is held, sponsored by the town mayor. There are also different culminating activities for the whole community after the religious traditions.

The Santacruzan parade is arranged in this order: