Guling-Guling Festival is a traditional occasion that happens yearly in the month of February in Paoay, Ilocos Norte. It is held before the Ash Wednesday or the start of the season of Lent or also known as “Semana Santa”, which begins 40 days prior to Easter. It is celebrated as a the last day of merry-making and enjoyment for the townspeople before the Lenten season. 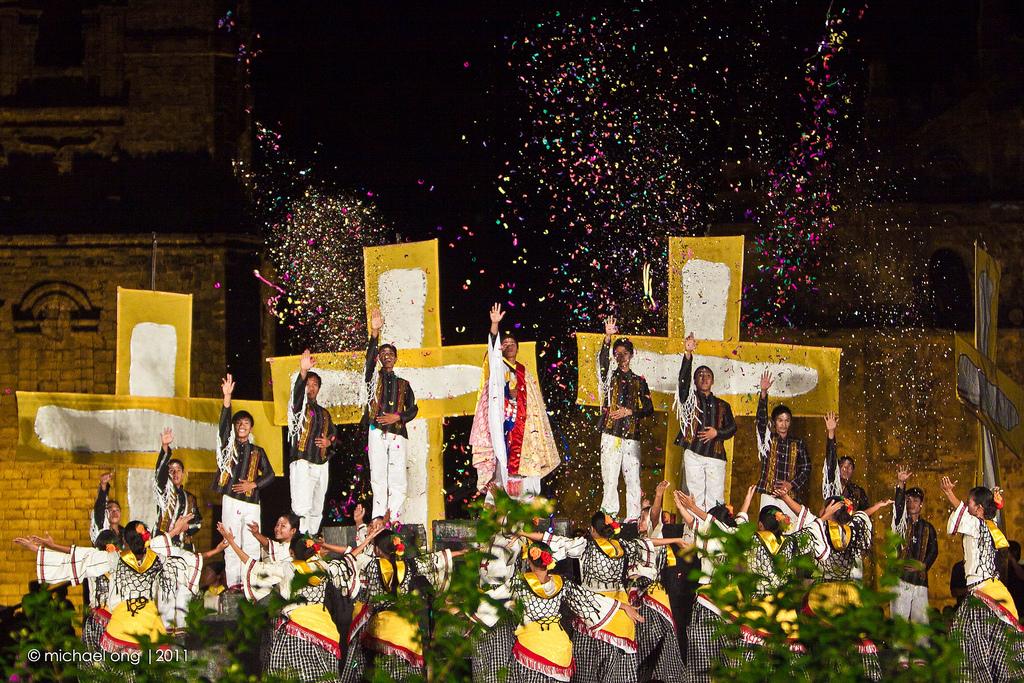 Guling-Guling Festival is a traditional occasion that happens yearly in the month of February in Paoay, Ilocos Norte. It is held before the Ash Wednesday or the start of the season of Lent or also known as “Semana Santa”, which begins 40 days prior to Easter. It is celebrated as a the last day of merry-making and enjoyment for the townspeople before the Lenten season.

This festival in Paoay, Ilocos Norte was introduced by the Spanish friars in the 16th century during the olden days of the Spanish regime. It was celebrated by the religious sector as a way of interaction with their members.

The word “guling” from Ilocano, means to mark or smear. The mayor in town would smear in the person’s forehead a cross sign that signifies the purity. They also believe that the mark in their forehead will cleanse all of their past sins. The cross is a white color made up of wet and white rice flour.

This old tradition is celebrated for almost 400 years.

During the celebration of Guling-Guling Festival, the dancers block the street. They dance with those whom they have had a petty quarrel as a means of forgiving them for their past misunderstandings. For the townsfolk, this is a time to forgive and to have a good time with everyone. Some of the folk dances are Sabunganay, Poayena, Ariquen-quen, Curatsa, Amorosa, Pandanggo and La Jota. The dance and music make the town lively.

Ulnas is a wooden sled, one of the farm equipments of Paoayeños that has been handed down from generation to generation. Used as a means of transferring of farm products, it is pulled by the strong carabao. However, this custom is gradually lost because of the propagation of modern farm methods and equipments. But during the festival, the great old ulnas is in the limelight again.

Dudol is an indigenous delicacy made from rice flour (bel-laay), coconut milk, sugarcane juice and anis. During the celebration, the crowd proceeds to the place where dudol is made to eat this together with the whole town. It is shared with family, friends and all their guests.

Basi is the official drink of the Guling-Guling merrymakers. Basi is made from sugarcane extract and samak, a plant commonly grown in the Ilocos region. The juice from sugarcane stalks are collected and boiled in large, open kettles. The brew is poured into earthen jars (burnays) and once it reaches room temperature, the samak leaves, bark and fruit are added. The mixture is stirred and poured into a jar that is tightly covered with banana leaves to allow fermentation. After the aging period, the basi is then transferred to bottles.

HOW IT IS CELEBRATED

The four-day celebration starts with the opening parade with the town’s homegrown products from Inabel – chicaron, handcrafted clay products, cash crops from garlic and onions and Ilocanos’ staple food, bagnet and longganiza.

The local people wear their colorful traditional outfits. The women wear kimona and pandiling, with matching heirloom jewelry and other accessories meanwhile the men they wear kamisa de Chino and abel trousers. Usually husbands and wives have similar attire.

The townsfolk dance at the place where dudol is prepared. There, you will find the anawang, a makeshift oven made from dried sugar cane pulp. They are then met by the town mayor who makes the sign of the cross on their forehead.

The natives believe that if you miss having the mark of the cross, bad luck will follow. After this traditional ritual, residents will partake the dudol and basi.

After the parade, the celebration will continue to the church, the streets and finally, to the town plaza where the merrymaking reaches its climax. Everyone can dance the way they want and dance with whomever they please. The night is filled with lights, music, glee and fun.

From Manila, you can take a bus to Laoag City with travel time last for 10 – 12 hours. From Laoag, you can rent a tricycle that cost approximately 250 pesos at the city proper to Paoay.

If you want to travel by plane there is a direct flight from Manila to Laoag via Cebu Pacific or Philippine Airlines. There is a jeepney that will bring you to the city proper for 60 pesos; from there you can rent a tricycle going to Paoay.