Himokilan looked imposing from a distance with a hat-shaped hill jutting out over the landscape and a forest of green blanketing the whole island. 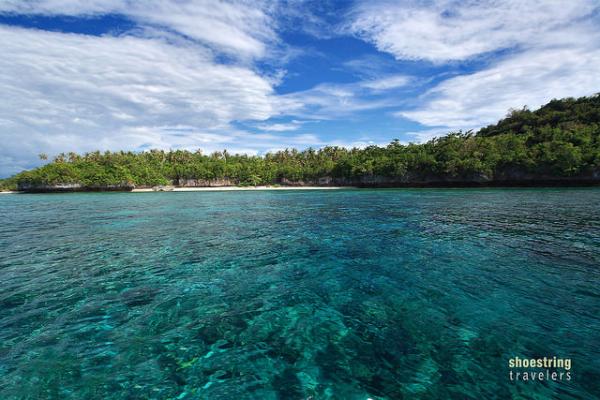 It had been an exhilarating day visiting Mahaba and Digyo Islands, the first two islands on our Cuatro Islas island-hopping tour. Hopping back on board our boat to wave goodbye to Digyo we realized it was nearing 3PM. That would leave us with barely enough time to make it to the last island on our tour before heading back to the mainland and catching a van to get back to Ormoc city before dark.

It would take us about 30 minutes to close the distance to Himokilan, the last island of our Cuatro Islas. This island is actually the nearest to the Leyte mainland, also about 30 minutes away by boat from the dock at Inopacan. Himokilan looked imposing from a distance with a hat-shaped hill jutting out over the landscape and a forest of green blanketing the whole island. Bracing for another magical scenery of an untouched white sand beach we were somewhat disappointed when we realized we were about to dock at a beach with a good number of houses all around. The owner of a vacation house on the beach had also built a concrete wall and fence that stood out against the otherwise pristine surroundings. 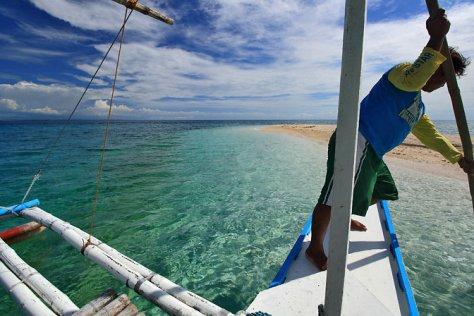 Touching down at the curving sandbar at Himokilan

Perhaps the pristine beauty of the other islands had spoiled us. The beach front at Himokilan was actually clean and nice despite the presence of houses in the area. Our intended place of disembarkation has a curving sand bar almost enclosing a natural pool on the beach at low tide. It was high tide when we came, leaving much of the sand bar submerged. But now we were somewhat reluctant to disembark at this beach, took another glance at our watches and cell phones and realized – probably more as an excuse – that we only had less than a half hour to finish up and catch that van for Ormoc. Our boatman suggested that we take a tour around the island instead. Good idea! Soon our boat was pulling anchor and rounding the island. 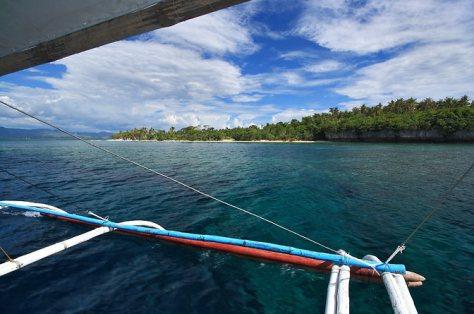 Motoring away from the sandbar and village (background), we began rounding Himokilan Island

Once we started circling Himokilan we realized that this is a beautiful island after all. The group of houses near the sandbar was the only sizable settlement on the island. Elsewhere Himokilan was covered in a veritable forest of green. Thick concentrations of corals surrounded the island, particularly at a beautiful secluded cove of white sand. Framed against a line of short but immaculate karst formations, this cove would have made for a wonderful stopover if we had more time. We also surmised that this must be the marine sanctuary where fishing and even snorkeling is not allowed.  At least authorities are taking steps to protect the marine environment here. 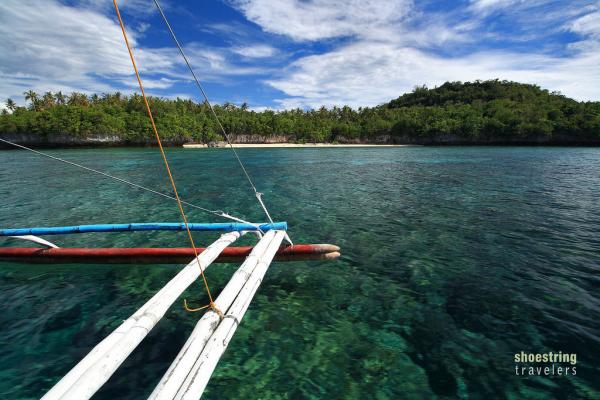 We rounded the island in a few minutes and then made a bee-line for the Leyte mainland at Inopacan. In retrospect we wondered why the boat operators would drop off visitors at the beach and sandbar situated in front of the village. Why not at that beautiful secluded cove we saw on our tour around the island? It was a question we never did get to ask our boatmen. 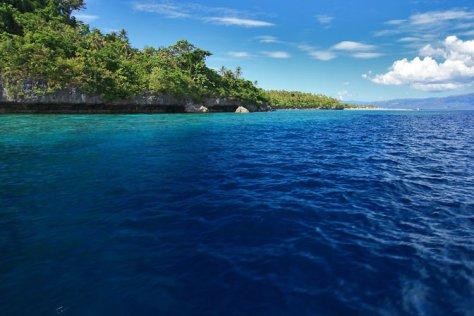 There was still an island among the Cuatro Islas that we never got to visit namely Apid Island. The boat operator told us before we got started on the island-hopping tour that it was the least beautiful of the four. This was probably because Apid is the most populated island in the group with its white sand beach also serving as the setting for a village and a parking lot for the village fishing boats. Our Cuatro Islas had just been downgraded to Tres Islas at least for this trip. Still our Cuatro Islas jaunt had been a wonderful trip, allowing us to visit almost untouched island destinations we had known for some time now but never got to see in person. Until now. Hopefully they would remain in their mostly pristine state for future generations to enjoy.