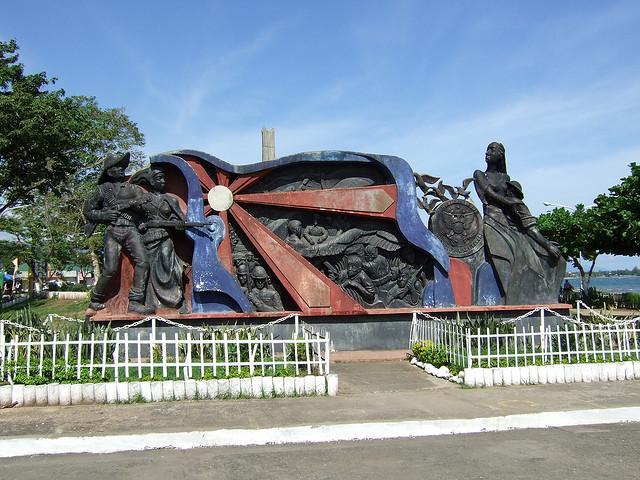 The "Bridge of the Queen" is considered as the last existing physical structure that symbolizes Spanish colonization of the city. Known as the oldest bridge in the city, its cobblestones are still intact, relics of an age long gone. It was built in the early 1800’s but was completed in 1861. During the Spanish era, the bridge served as a docking area for sailboats, vintas of Chinese, Javans and Indonesians who frequented the island to sell their produce. The bridge is still in use today. It is situated near the twin buildings of the Executive and Legislative branch of the city and beside the Ormoc City Hall.

The Veteran’s Park was constructed in early 1990s in honor of the Filipino soldiers who fought for the liberation of Leyte and the Philippines. The Centennial Marker was erected in 1998 to commemorate the 100th year of Philippine independence. One gets a good view of the bay, the port and the plaza from this point. It is a favorite rendezvous for the young and old alike for picnics and leisurely strolls on its verdant lawn. And from here, one can experience the refreshing breeze from the sea and witness the magnificent beauty of the sunset.

An impressive memorial marker put up by the Nagoya and Gifu Prefectures as a token of friendship of Japanese and Filipinos in the aftermath of World War II. It is situated in one of the city's picturesque hills overlooking Ormoc Bay, Carlota Hills in Brgy. Can-adieng. Japanese visitors frequented this area in memory of their beloved countrymen who fought in World War II.

The residence of Cong. Dominador Tan with well-manicured lawn and a swimming pool was one of the most beautiful scenery in Ormoc at that time which was completed a year before the World War II. As war broke out, it was utilized as one of the headquarters of the Japanese military operations in Leyte and was partially destroyed by the bombings of the famous Battle of Ormoc Bay. Its ruins serve as a symbolic structure of Ormocanons indulgence of World War II.

The graveyard of the victims of the 1991 flash flood is where the biggest cross in the city can be found. An obelisk in the center is erected where interpretations of the victims by the artists all over the country will be installed. A commemorative mass, lighting of candles and laying of flowers are done on this site every November 5th each year in memory of the victims who perished in the tragedy.

There are also lots of inns and pension houses around the city where one can have great accommodations.