It’s a Filipino word meaning “back” and the name so befits a small island that has languished in the shadows of its bigger brother. 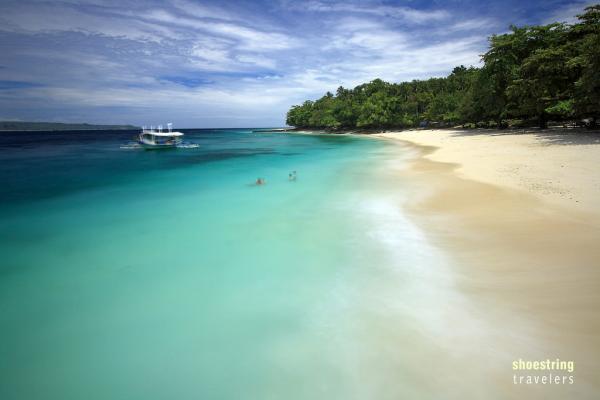 It’s a Filipino word meaning “back” and the name so befits a small island that has languished in the shadows of its bigger brother. Talicud Island lies just off the southwestern tip of bigger Samal Island – both islands belonging to the Island Garden City of Samal (IGACOS). Samal Island itself has seen its share of development in recent years and having gone there almost every time we visited Davao City in the past, we were definitely looking for a place more laidback and tranquil. That was when we began to set our eyes on Talicud. 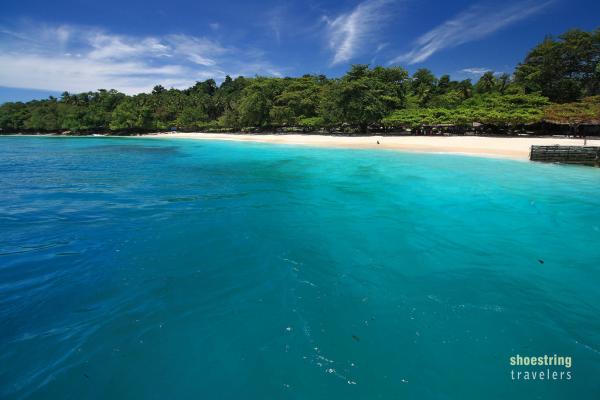 Talicud Island is just an hour or so away by ferry from Davao City’s Santa Ana Wharf. By chance we hopped in at a ferry boat owned and operated by one of the resorts at Talicud – Isla Reta Beach Resort where we had planned to stay overnight. The fare is P30 more than for other boats that ferried visitors to Sta. Cruz Wharf – the major wharf at Talicud – but this boat took us directly to Isla Reta Beach saving us a few minutes of travel on foot. 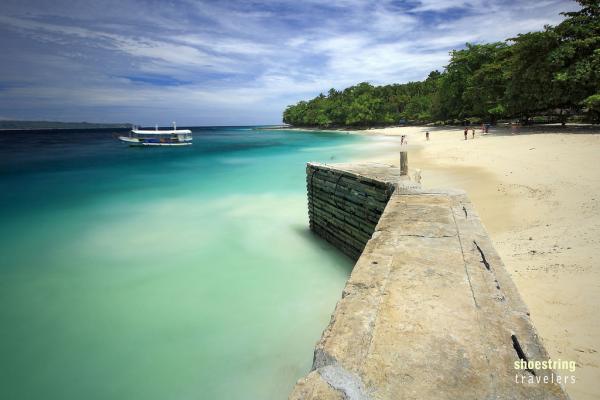 After a fairly uneventful one-hour-plus ride through slightly choppy seas, Isla Reta Beach was soon visible, its deep blue and turquoise waters beautifully framing a white sand beach and lush green vegetation. We could hardly wait to explore the place but had to check in first at one of the resort’s cottages. We were expecting some pretty basic accommodations (which they did have in the form of native huts and public restrooms) but the cottage we rented for P900 at least has an electric fan, was spacious and clean and has a small patio for dining. The drawback was that electricity only runs here from 3PM to 6AM of the following day. 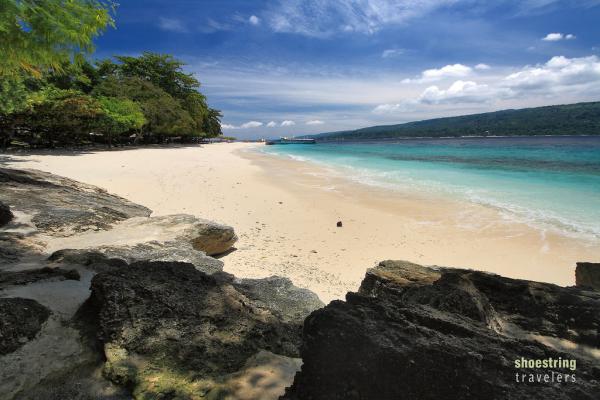 The resort covers a wide area shaded plentifully by coconut palms and other trees and bordered by a forest on its western side. The wild grass that covered the resort grounds was well-manicured, probably helped by some herds of sheep that were released to feed on the resort grounds at certain times of the day. 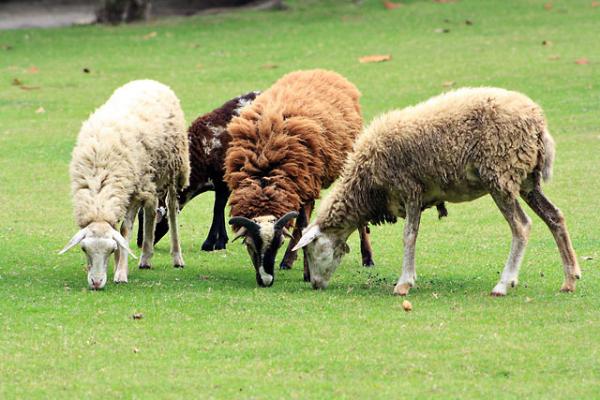 Sheep feeding on the resort grounds

Down on the beach we soon realized that the cream-colored sand was indeed soft and fine. A glance at the clear turquoise waters made us realize that we had left our snorkel and mask back at our Davao City friends’ home. We felt that the resort charged too steeply for snorkeling equipment so we were content to just walk and swim at the beach. Before leaving back for Davao the following day, however, we were surprised by what appeared to be a small school of big-eyed trevally (local name talakitok) leaping in unison above the water very close to the shoreline. We could just imagine the marine life beneath those turquoise waters that we had missed seeing. 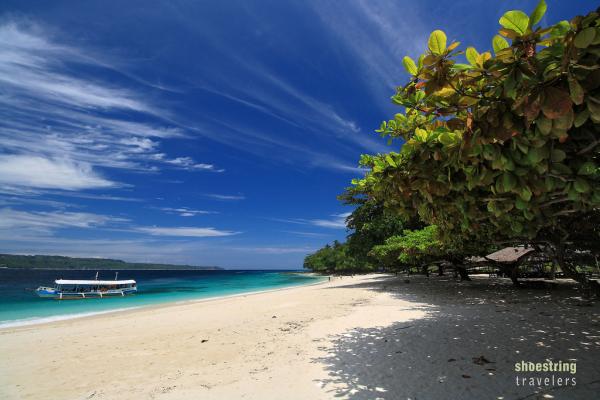 One of the great things about Isla Reta is the generous amount of shade afforded by, among other trees, huge Talisay or Indian Almond trees with their umbrella-like cover. This enabled us to leisurely walk the beach for long stretches of time in the hot afternoon sun. By lunchtime a host of visitors (mostly from Davao City) had congregated under the shade of the trees or in one of the several huts for day tours right by the beach, grilling and taking lunch after a relaxing dip in the sea. This was a weekday so heaven only knows how crowded this beach can become on weekends. By 3PM though, the crowd was gone, almost vanished in an instant, probably catching the 3PM ferry back to Davao City. 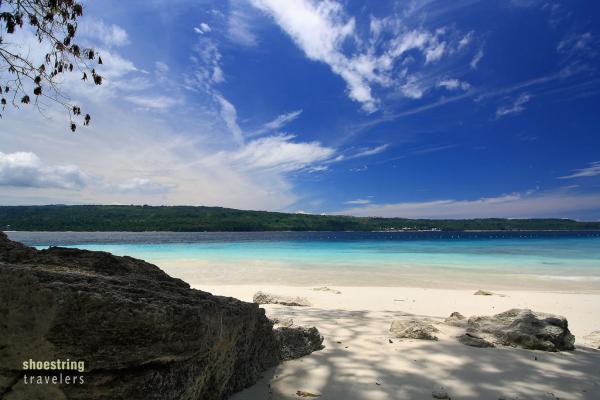 The rocky portion of Isla Reta; Samal Island looms large in the background

By this time we had the beach almost all to ourselves except for one or two small groups of individuals. The beach actually extended south for a few hundred meters more; this time there were several huge rocks arrayed along the beach making for some great photo opportunities with the main island of Samal in the background. We did notice, however that the resort management had filled in some of the spaces between the huge rocks with concrete to make the going easier for visitors exploring the area but somehow marring the natural beauty of the whole scene. 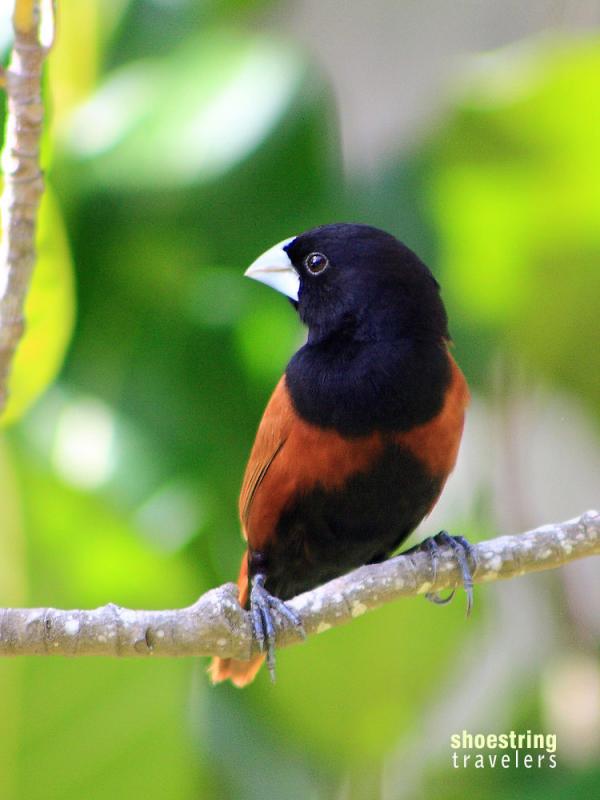 A chestnut munia at Isla Reta

With several trees and a forest just at its back, this resort undoubtedly attracts a fair number of birds. We spied chestnut munias, yellow-vented bulbuls, the ubiquitous Eurasian tree sparrows and a number of colorful pigeons and heard (but could not see) several more birds who were making all sorts of calls in the nearby forest. The chestnut munias (called mayang pula locally) were even building nests at tree heights no taller than ours; hopefully visitors here will leave them undisturbed. 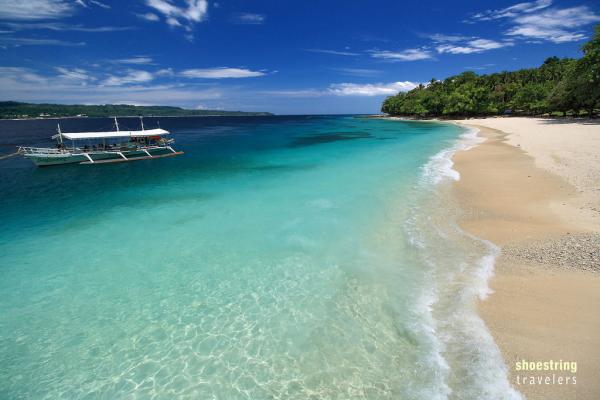 A boat on an island-hopping tour passes by Isla Reta

We only had a day and night stay at Isla Reta but with the resort’s laidback atmosphere, that short amount of time seemed like an eternity. Despite this, there are even more serene and laidback beach attractions on Talicud Island. Stay tuned…

For directions on how to get to Isla Reta on Talicud Island and for other travel tips, go to this page.