Mention Sorsogon to most tourists – foreign or local – and the first thing that comes to their minds is interacting with the whale sharks in Donsol. 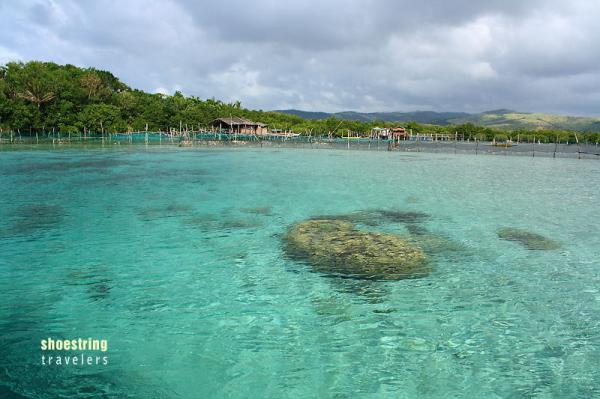 Mention Sorsogon to most tourists – foreign or local – and the first thing that comes to their minds is interacting with the whale sharks in Donsol. Hard to blame them. The whale shark interaction is after all a worldwide phenomenon featured as the Best Animal Encounter in Asia by Time Magazine in 2004. But we were in Sorsogon on this sunny April primarily to see Bulusan Lake and the pinkish-white sand of Subic Beach and Tikling Island. Juag Lagoon was more of an afterthought – added only because boatmen have already included it in their itinerary and we would pass by the lagoon on the way to Subic Beach in Calintaan Island anyway. How wrong we were! 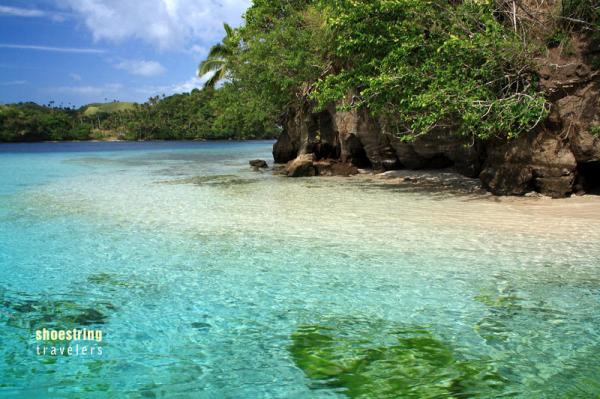 Amazing scenery on the way to Juag Lagoon.

Our grizzled lead boatman/tour guide had originally wanted to go to Calintaan Island first but we overruled him and opted for Juag. Better to reserve the best for last, we thought. Let's get Juag out of the way first. After making the 20-minute slightly rough crossing from the pantalan (pier) inMatnog, our motorized outrigger slowly glided into the now calm waters of the lagoon. The stunning scenery of crystal-clear waters, small stretches of white sand beaches and verdant palms that greeted us seemed to foretell that this was going to be more than just the side trip we had originally envisioned it to be. 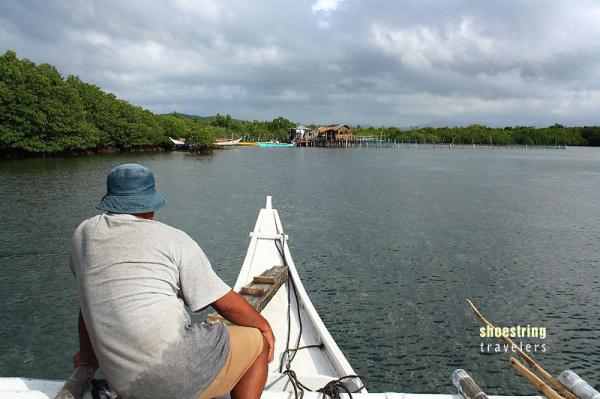 Our boat headed towards the marine sanctuary owners' native hut that stood on stilts in a sandbar in the middle of the lagoon, humbly standing guard over fish pens spread over the area. Green hills circling the lagoon added to the tranquil feel of the place. We were soon climbing on board the hut after alighting from our boat and shaking hands with the wife of Alex, the owner of this sanctuary. 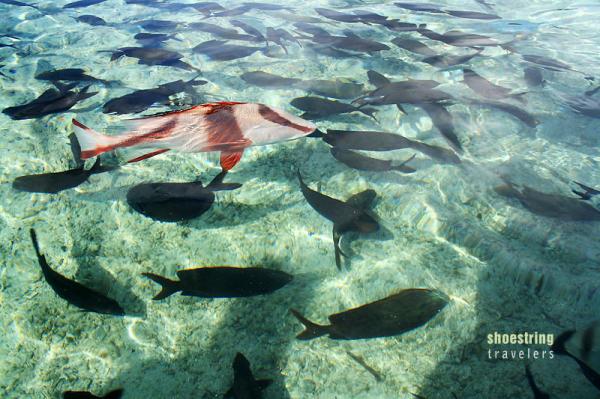 A swarm of fish in the shallow waters below the owners' hut.

Looking down into the very clear waters below we could see but a few fish but we knew the guys would come out the moment we start throwing food pellets and small fish into the water to feed them. But just as we were about to wade into the shallow waters of the first pen I belatedly remembered that they do not allow people who have donned sunblock to swim or wade in these waters – the chemicals somehow poison the fish here. That meant Nina, who had already put on some sunblock, will just have to watch from the hut. 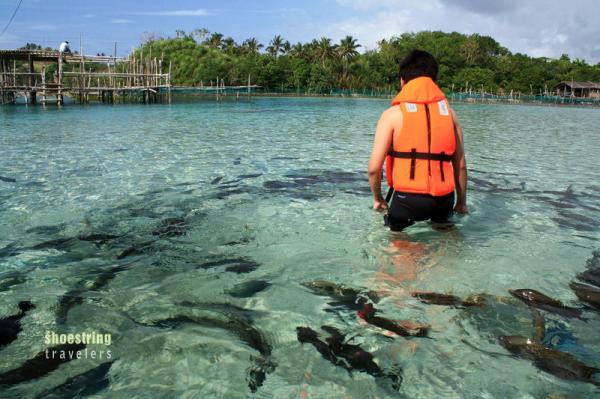 We had just began dipping into the water when large coral fishes started popping out and began swarming towards us – a pleasant surprise. Another surprise was the clarity of the water. It was so clear we hardly needed masks and snorkels. When we began throwing food pellets into the water even more fish appeared and started a feeding frenzy. They were soon circling my nephew like native American Indians riding in circles around a beleaguered wagon train. 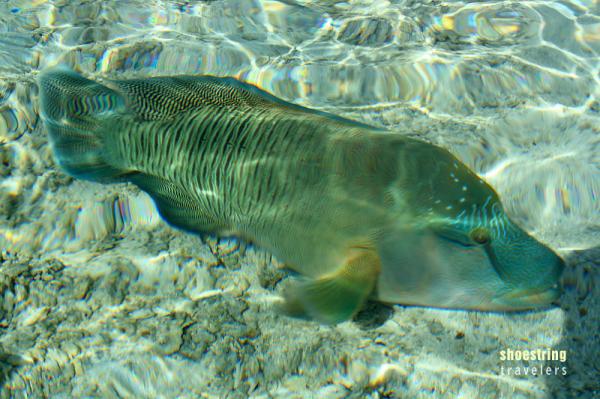 Turns out we can even grab small bits of bread and let the fish bite at them without exposing our fingers. These are not small fish, mind you. The owners told us that many of them have been left to grow for 10 years now and have grown to just about the maximum size they could attain if left undisturbed in their native habitat. They were quite colorful too. Easily the star of the show is a huge Napoleon Wrasse, a rare coral fish that we've heard is now protected due to its dwindling numbers. Like other large fishes it is carnivorous and would only eat the small fishes that we threw into the water rather than bread or pellets. There were small and colorful reef fishes too but they dared not come out when we fed the bigger ones. The pecking order at work apparently. 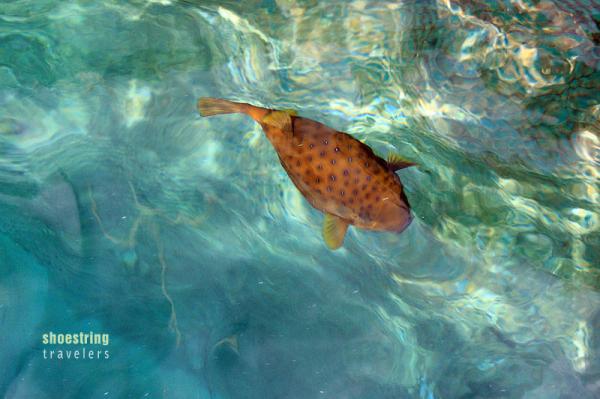 A bamboo raft guided by ropes led from the owners' hut into another fish pen that contained the real giants of Juag – namely large lapu-lapu (groupers) and talakitok (trevally or big-eyed jack) – and did we spot some tuna down there also? Some of these fish had cross-sections thicker than my thighs! We did not find out if we could swim inside this pen. With fishes this huge we wouldn't dare anyway. They gobbled up any small fish we threw into their cage with lighting quickness. Curiously though we saw what appeared to be small puffer fish swimming bravely in the pen with the giants. If these are puffers that would explain why. Puffer fish have enough poison in their bodies to kill a human being and it's wise for any creature to avoid them. 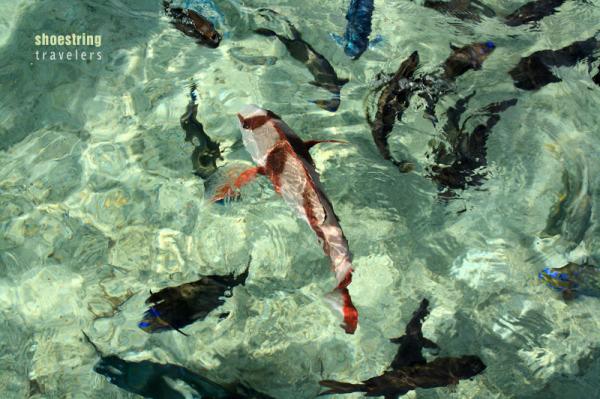 Juag lagoon also contains giant clams, huge sea cucumbers, lobsters and even a pawikan or sea turtle. The owners do not raise these creatures for consumption or for sale. It's a hobby for them, motivated by their love for the sea creatures and their desire to preserve marine life. Not too long ago they recovered an injured dolphin that they nursed back to health inside one of the pens and then released into the wild. 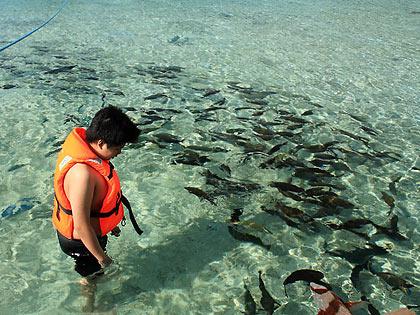 How do they make a living then? Alex's wife says they do sell the lobsters they raise here. They also sell souvenirs at their hut. We've been advised by the tourism people in Matnog and from what we've read in other bogs to give the couple a donation and we were more than happy to give a gift for the special treat we've just had. And indeed that's what is was: a one-of-a-kind experience that went beyond our expectations.

First things first. Getting to the port town of Matnog may be done in a variety of ways. If you're coming from Metro Manila perhaps the simplest is to arrange a bus ride all the way to Matnog town. There are buses such as Philtranco that do this. Many are buses bound for Samar that pass by Matnog on the way to roll-on-roll-off ferries at the pier in that town. These bus rides can take 12-14 hours though. Of course you can also drive all the way by private vehicle to Matnog from Metro Manila or any destination in mainland Luzon.

The faster option – the one we took – was to take a flight to Legazpi City (1 hour or less). Cebu Pacific and Philippine Airlines have daily flights to this city (and you can even visit the Cagsawa ruins and a view of Mayon Volcano as a side trip). From the airport in Legazpi head for the central bus terminal near the Gaisano Pacific Mall downtown. A trike at the airport can take you there at the standardized rate of P50. At the central terminal take an AC van bound for the town of Bulan, Sorsogon and tell the driver to drop you at Trece – the boundary of Bulan and Matnog (P160 per person). This trip will take about 2.5-3 hours. From Trece get a jeepney or trike to Matnog. You might need to wait for 30 minutes to catch the jeepney to Matnog. In our case we ended up taking a trike for 3 people because we wanted to be able to settle down right away after an exhausting trip (sadly our flight to Legazpi was delayed for 4 hours!). The trike ride set us back by P200 total.

Alternately you can take a bus at Legazpi that goes straight to Matnog, although there are few buses that do this 4 hour trip. Or you may head for Daraga (a town just after Legazpi) and take a bus to Sorsogon City (1.5-2 hours). At Sorsogon City there are jeepneys that go to Matnog (another 2 hours). You need not worry about riding non-aircon buses here. The fresh and clean air in Sorsogon and Albay – a big difference from Manila's polluted mess – makes such rides pretty comfortable.

All boat rides to Juag and the islands of Calintaan and Tikling are now managed by the Boatcrew and Operators Organization of Matnog in coordination with local tourism authorities. This means boat fares are standardized at P1,600 per boat that can take up to 10 passengers plus the boat crew (maximum of 3). It is best to head out to the tourism office near the port to arrange for your trip. You might run into boatmen offering you a ride to Juag, Calintaan and Tikling. They are probably not connected with the association of boat owners and crew and therefore not under the tourism people here. We suggest you skip them. It's much safer to take the boats officially with the tourism people and these boats come with life vests too. You will need to pay the P70 environmental fee per person. 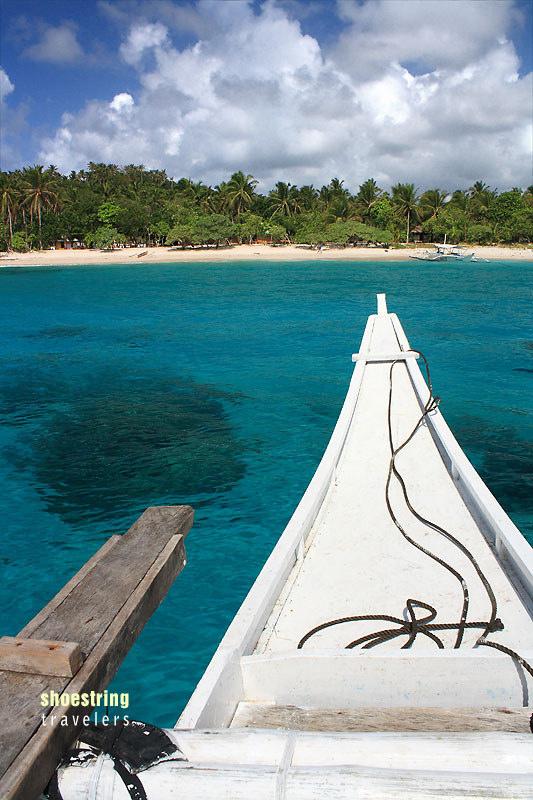 There are relatively cheap accommodations in Matnog but after looking at about 2 of them we ended up staying at Matunog Pensionne in Barangay Camcaman, just walking distance from the public market and main port. It's not expensive either - they offer clean, air con rooms good for two with air conditioning and cable TV for P1200. (We added P200 for an extra bed.) No meals served here but there are plenty of places where you can eat nearby. Other resorts to consider are Richwell Beach Resort and Stardust Resort both in Banuang-daan, not too far from the town proper.