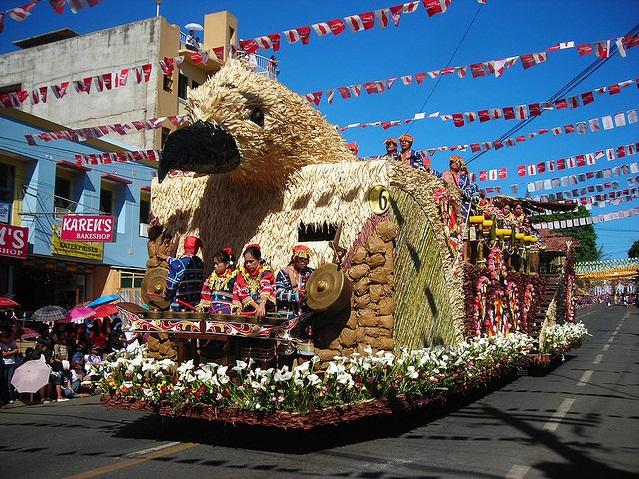 The festival commemorates the cultures and traditions of the seven tribes of Bukidnon or also known as “Kaamulan” – Bukidnon, Higaonon, Talaandig, Manobo, Matigsalug, Tigwahanon and Umayamnon – that originally inhabit the province. This festival is unique because it is the only ethnic festival in the Philippines and people celebrate it as a sign of recognizing the native groups in their province. The Kaamulan word originated from the word “Amul” which means gather. The festival aims to gather for these puposes: a datuship ritual, a wedding ceremony, a thanksgiving festival during harvest time, and a peace pact.

The festival was first held on May 15, 1974, during the fiesta celebration of the municipality of Malaybalay. A town official thought of inviting some native people to the city and asked them to perform a few dance steps at Plaza Rizal to cheer up the party.

It became very popular and together with national coverage, the Kaamulan Festival has turned out to be the regional festival of Northern Mindanao, as confirmed by the Regional Development Council of Region on September 16, 1977. Kaamulan was formerly held on the first week of September but in 1996, it was transferred to the present date to synchronize it with the foundation celebration of the province.

The Seven Tribes Of Bukidnon

This tribe in the province of Bukidnon continues to conserve their customs, cultures, traditions, beliefs, and practices despite the modernization in the country. Their population is now approximately 100,000. They are living in the municipalities near Mount Kitanglad. The women of  the tribe are skilled in embroiderers and patchwork makers.

They speak a quaint archaic language of their own which cannot be understood by local and other ethnic groups in the Bukidnon. The Manobo have estimated population of about 250,000. They are mostly farmers and hunters.

They are the nomadic branch of Bukidnon Manobo with good skills in beadwork and brass jewelry. These natives live along the watershed of Umayam River. The Umayamnon Tribe of Bukidnon has an approximate population of 101,906. They are calm and silent, have fair skin and wear beaded turban without hair.

“Matigsalug” basically means people among the river. The tribe live along the Salug River in San Fernando. Their estimated population about 146,500.

The tribe lives along the Tigwa River and in the Tigwa-salug Valley. They are popularly known as the traders among the other ethnic groups. They have a loud voice when they speak.

This indigenous tribe can be found in the northern regions of the island of Mindanao. Their approximate population is 350, 000 but they are living separately over five provinces. Planting of rice, corn and vegetables is their livelihood.

They are the lowland people who have adapted Christian traditions. Among the ethnic groups, they are the ones who have utilized modern living in the province of Bukidnon.

Some Activities at the Festival

By Air
Although there are public & private air-strips in Bukidnon, there are no commercial flights going directly to the province. The nearest airport is the Lumbia Airport in Cagayan de Oro City, catering domestic flights from the cities of Manila, Cebu, and Davao. From Cagayan de Oro, a travel by land must be taken to reach Bukidnon.

Taking the bus is one of the convenient ways to reach Bukidnon by land. About 104 kilometers road distance from Cagayan de Oro and that is approximately one hour and a half land travel straight to the capital city of Bukidnon, Malaybalay. The capital city could also be reached from Davao City via Salawagan Quezon Bukidnon and that is about 208 kilometers with an estimated time travel of three and a half hours.

Other public transportation is also available, like public utility jeepneys and vans for hire.

Since Bukidnon is a landlocked province, sea transportation is generally through its closest port, the Port of Cagayan de Oro City then takes the transportation by land to reach the cities and municipalities in Bukidnon. Several ferry services are available connecting Cagayan de Oro City to seaports in the cities of Cebu, Manila, Bohol and other ports in Luzon and Visayas..