The reason for the cool air on this trip is Lake Danao's geographical location. Situated just 18 kilometers northeast of Ormoc City proper, the lake sits at an altitude almost similar to Tagaytay's. 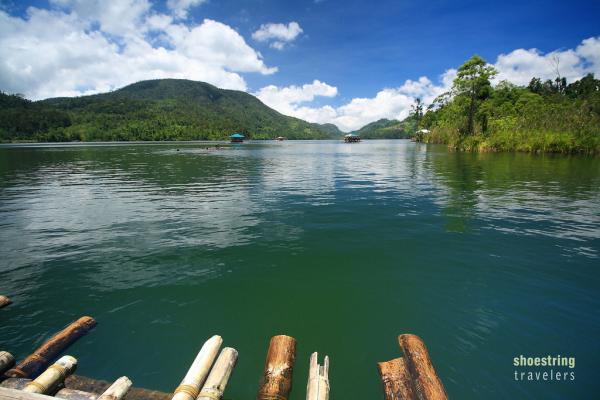 We were baking inside the multi-cab as we made our way out of Ormoc City proper and into the hills northeast of the city. The vehicle had customarily filled up with passengers at the terminal near the market, not leaving until all seats were taken. Many of the commuters were lugging a fair amount of goods to bring back home, further cramping the already limited space inside our transport. We had begun to worry about this being another hell ride when ten minutes into the trip, and as our multi-cab began climbing the road towards Lake Danao, the air started to get cooler. The sight of lush virgin forests looming ahead began to relax our frayed nerves.

The reason for the cool air on this trip is Lake Danao's geographical location. Situated just 18 kilometers northeast of Ormoc City proper, the lake sits at an altitude almost similar to Tagaytay's. It is part of the 2,100+ hectare Lake Danao National Park and is surrounded by the Amandiwin mountain range. Lush forests still exist in this part of Leyte; some pine trees may even be sighted in the vicinity of the lake. We kept hearing various species of birds with their distinct sounds; hornbills, doves and wild pigeons abound here although in constant danger of being hunted. 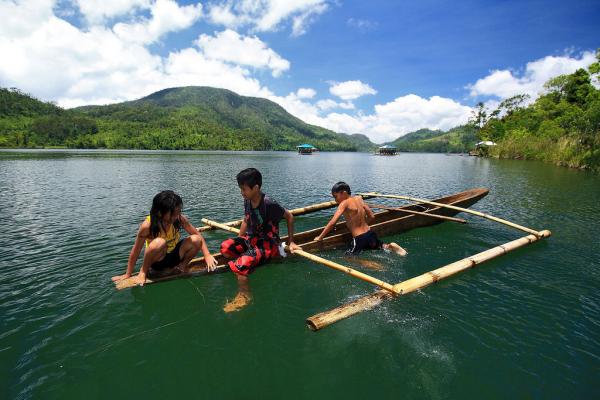 Arriving at the Lake Danao's entrance we decided to rent one of the covered rafts that could be pulled by lines to the center of the lake. It was almost lunchtime when we got there and the sun was blazing hot but the shade afforded by the raft's built-in hut and the breeze blowing across the lake cooled us down. We brought packed lunches with us, supplementing them with the paco or fiddlehead salad that the raft owner prepared for us. After lunch it was siesta time. The cool breeze and the placid waters of the lake lulled many of us easily into sleep. 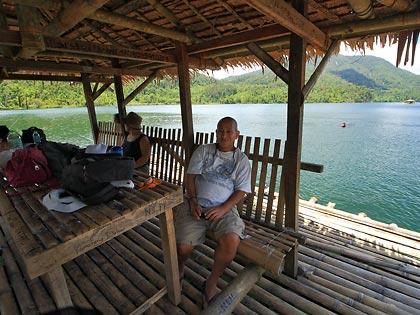 Our rented hut on a raft in the middle of Lake Danao.

Eating, sightseeing and sleeping might be too docile for many people but there are additional activities here to ramp up the adrenalin. Kayaks may be rented; we saw some Caucasians with their Filipino hosts paddling happily in brightly colored canoes while some children (expert swimmers at that) played in the water near the rafts. 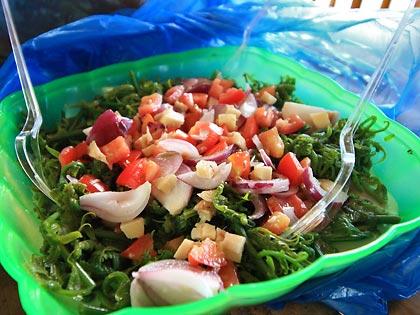 Paco or fiddlehead fern salad: part of our lunch fare on the raft.

We had planned for a short stay at Lake Danao and after two hours of just lounging on our raft and enjoying the food and scenery we decided to leave. Actually we toured the other nearby portions of the lake before heading back to Ormoc. Leo had wanted to go to a view deck at one end of the lake which seemed to offer an excellent panoramic view of Lake Danao but locals were pointing to a long and steep ascent along the main road to the view deck location. By now it was burning hot and we felt such an exercise was not warranted. Only later did we find out – from our multi-cab driver – that we could have asked the raft owner to pull the raft towards the opposite bank from where we could have disembarked for a short and easy trek to the view deck. Always happens. No matter how much research you do about a place. 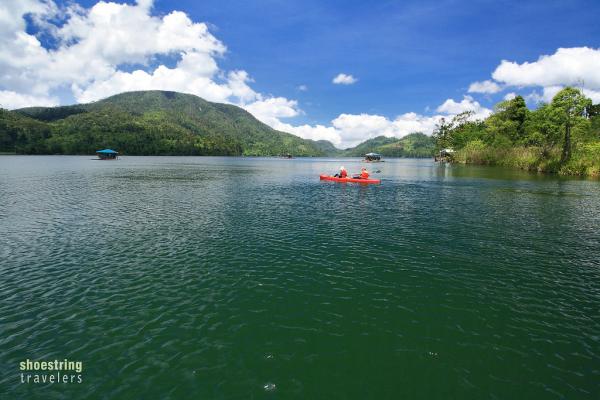 Lake Danao scene with bright red kayak in the background.

To get to Lake Danao by public transport look for the terminal near the public market at Ormoc City for jeepneys and multi-cabs bound for Bgy. Lake Danao. The ride can take anywhere from 30 minutes to an hour long via multi-cab, the lightweight, four-wheeled vehicles popular in the provinces used to reach areas not served by jeepneys. (We made it in 45 minutes.) Fare is P40. We were fortunate to board a multi-cab at the terminal but never saw a jeepney. There are only a few multi-cabs headed to Lake Danao so if you are not able to catch one you can ride a trike to Barangay Dolores, then at the latter ride a habal-habal motorbike to Lake Danao. The lake is a 5-minute walk from the multi-cab stop near the barangay hall. However, our multi-cab driver drove us all the way to the lake entrance – very good for us because the sun had already gotten a bit hot at the time.

Our time in Lake Danao was relatively short but relaxing and enjoyable. According to TripAdvisor Lake Danao is the #1 tourist destination in Ormoc City. It is also one of the 8 lakes in the Philippines everyone should visit according to Rappler. 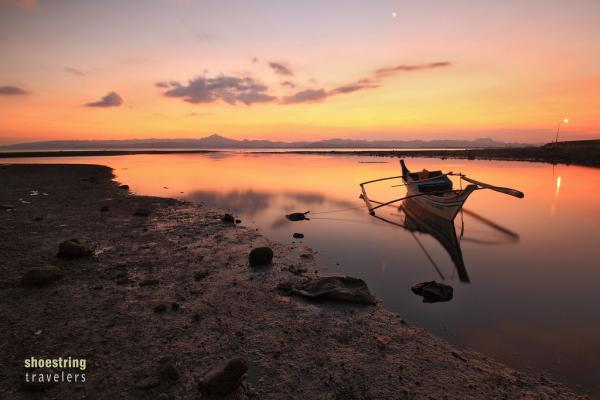 Ormoc City was actually the base city for our trips to Lake Danao, theCuatro Islas and Kalanggaman Island, all located on the western side of Leyte. We've been to Tacloban several time before but this was our first time in Ormoc. We also intended to visit an old friend of Leo's from college – University of the Philippines Math professor Dr. Oggie Hermosilla who is retired and living in his hometown. We took Oggie along with us for all our trips in this side of Leyte and became our unofficial guide as a result.

We were curious to see how Ormoc would look like more than a year after taking a terrible battering from Typhoon Yolanda. Practically all structures in the city were either destroyed or damaged by the typhoon's 300+ kph winds. Fortunately there was no storm surge so casualties were not heavy unlike in Tacloban and the eastern Leyte coast. Although there were still isolated indications of the damage wrought by Yolanda, it was apparent that the city had not just recovered from the typhoon, it was actually progressing.

Oggie told us that after Yolanda many investors have flocked to the place. The skyrocketing prices of real estate was proof alone of this. Our first inclination though was to visit several food establishments and we just about tried a wide range – from food stalls at the public market where we sometimes bought food for our island-hopping trips to comfortable dining destinations serving Chinese and local fare including fresh seafood. We were particularly interested in the su-tu-kil restaurants. Su-tu-kil stands for three ways that seafood is cooked namely sugba (grilled), tuwa (a local soup dish) and kilaw (served raw and marinated in vinegar and spices, as in ceviche). 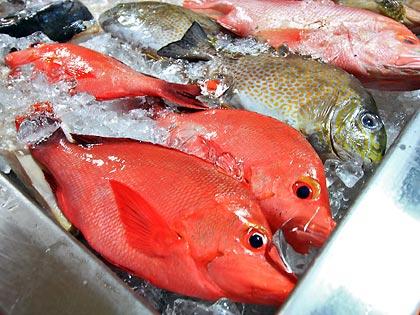 Fresh and colorful seafood at a sutukil restaurant in Ormoc.

Since it was the start of summer it was not that convenient to tour the city on foot because of the heat. Evenings and late afternoons are a different story though. The areas near the sea are good hangouts particularly theOrmoc City Park and the bay walk. There are several food establishments here, from open air barbecue and snack stalls serving cheap fare to more fancy restaurants.

We've heard that the sunsets at Ormoc are pretty good so on our second day here Leo went with Oggie to the tidal flats near Ormoc City's port terminal near the mouth of the Anilao River. There were just a few clouds on that day – the right amount and locations of clouds are essential for spectacular sunsets – but the view was still excellent. 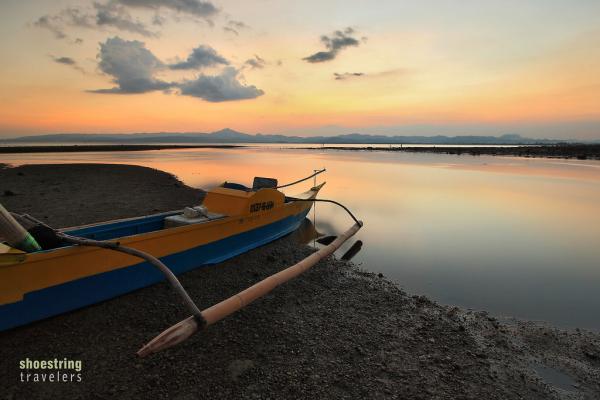 A boat at sunset, near the Ormoc City pier.

There are no flights to Ormoc from the major local airlines. However one can easily reach the city via ferries from Cebu. The fast ferries such as Super Cat, Weesam and Ocenjet can make the trip in 2.5 hours or so. In our case we flew to Tacloban from Manila then boarded a van for Ormoc. The 3 major transport companies operating vans bound for Ormoc are Van Van Tours, Duptours and Grand Tours, each with their own terminal in Tacloban. If coming from the airport at Tacloban get a taxi to take you to any of the 3 terminals (we paid P250 for the ride). In our case we chose Grand Tours upon the recommendation of our taxi driver who told us that Grand Tours seats only 3 people to a row in their vans as opposed to the more cramped 4 people to a row arrangement in the others. The fare is P130. The ride to Ormoc is more or less 2.5 hours long.

There is a wide range of accommodations to choose from in Ormoc. Some new hotels have also mushroomed after Yolanda. We chose Cristina Business Suites which offers rooms for 5 people and which is a place that our friend Oggie frequents. Nearby David's Inn has been getting good reviews but their rooms are mostly for two people (we did take our breakfast at David's almost everyday though). Both establishments offer very reasonable rates.