Liliw: The Tsinelas Capital, A Red Church and Some Good Eats

Liliw in Laguna with its cold springs called batis in the Tagalog dialect. Liliw is now widely regarded as the "tsinelas capital" of the country for its footwear-making industry. 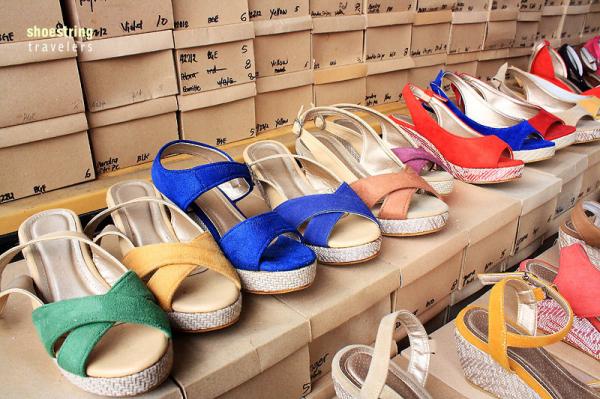 In our younger years we've always associated the town of Liliw in Laguna with its cold springs called batis in the Tagalog dialect. It's the town in the region that you visit if you want a cool dip in a mountain spring during the hot summer months. In recent years however, Liliw's claim to fame has shifted. While the cool mountain springs are still there, Liliw is now widely regarded as the "tsinelas capital" of the country for its footwear-making industry. And the town has many more to offer to the unsuspecting traveler as we would discover in our visits to this place. 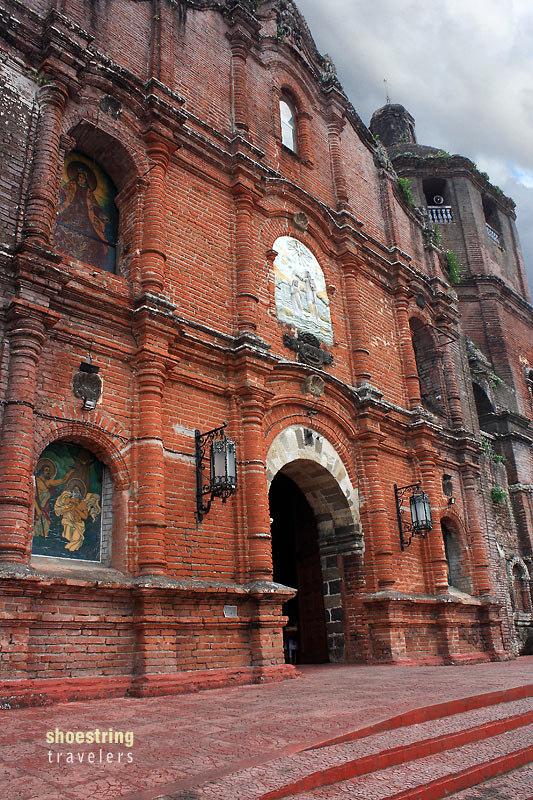 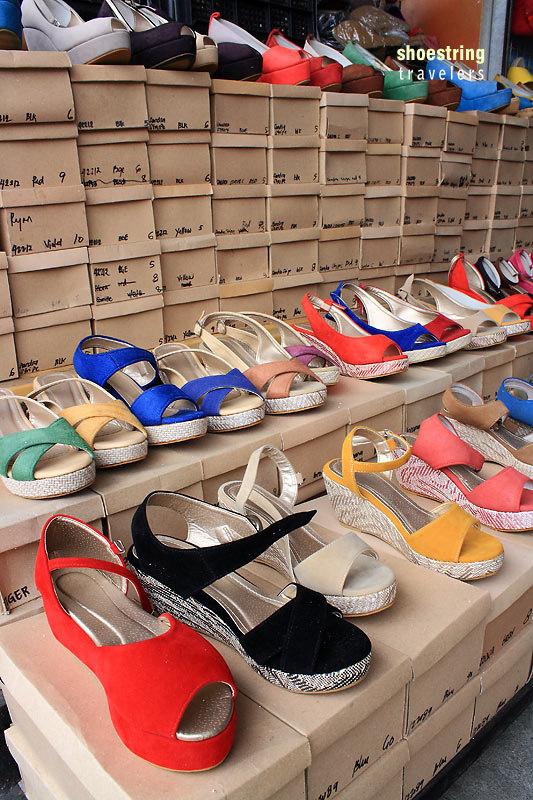 Our latest visit to Liliw was part of our road trip through the Laguna towns along the foot of Mt. Banahaw and Mt. San Cristobal. As we drove into town through Gat Tayaw Street, the monicker " tsinelas capital" attributed to Liliw immediately became apparent. 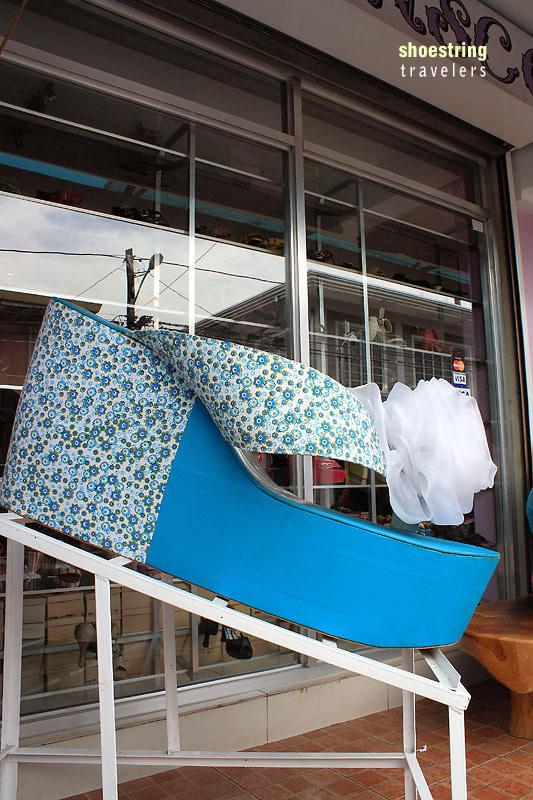 Lining the street named after the town's founder are dozens of footwear shops, many displaying a giant slipper or sandal to solicit the visitor's attention. With colorful displays of slippers, sandals and shoes however, the 80 or so shops at the town center hardly need such attention-garnering schemes. There is a wide array of styles and designs to choose from but the good quality and bargain prices of the footwear are what really attract buyers to Liliw. And since these footwear are handmade by the town's skilled shoemakers they tended to be more durable. 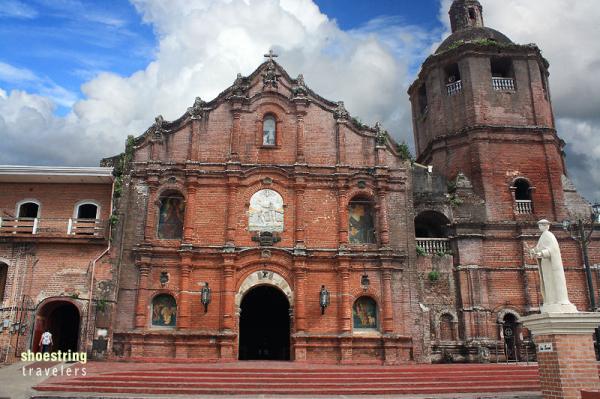 Finding themselves in a veritable shoe paradise at the aforementioned Gat Tayaw Street, our lady friends began shopping to their hearts' content. Knowing this would take a while Leo decided to segue from shooting pictures of Liliw's footwear street scene and made his way to another Liliw landmark: the San Juan Bautista Church building. This church's Baroque architecture is a common feature of Spanish era churches in the Philippines but what makes it unique is its red brick composition. This has got to be the most beautiful and impressive of all religious edifices we've seen in Laguna so far. 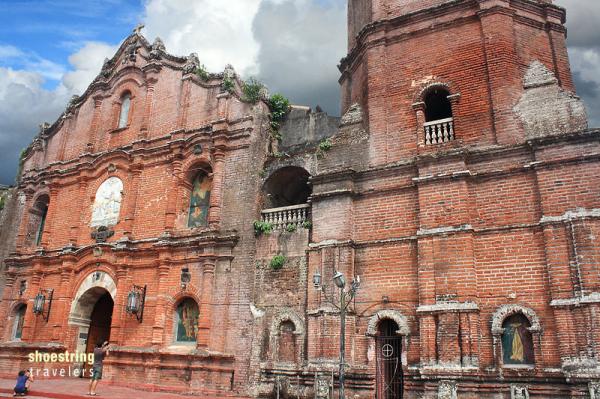 The red-brick facade of the San Juan Bautista church building.

The San Juan Bautista Church is situated on a slight rise of ground, giving it a good view of the town center. It's merely walking distance from the concentration of footwear shops. Originally constructed in 1605, the church had to endure major structural damage during the 1880 earthquake. Reconstructed, it was then partly burned just 18 years later. Renovations have maintained the beauty of the edifice; the latest in 2010 was designed to restore the interior of the building back to its old splendor. A house of Liliw's rich and famous in older times.

We didn't really notice it the first time we visited Liliw but located mostly along Gat Tayaw Street and sometimes mixed in with the footwear shops are ancestral houses that date back to the early 1900s. It's a throwback to the lifestyle of Liliw's wealthier citizens during older days. Some of these houses have converted their ground floors into footwear shops or restaurants. It's not a new practice. The heritage homes in Vigan have been doing the same thing for decades, perhaps even centuries. Some of the antique residences have obviously been restored while others are in dire need of repair and rehabilitation. For such as small and somewhat distant town as Liliw it is pleasantly surprising that there are places for excellent dining. There's at least two:Chef Mau Restaurant and Arabela Italian Restaurant. Lunch during our weekend tour was at Chef Mau, owned by Chef Mauro Arjona Jr. This restaurant is not found at the town proper but on the road to Magdalenatown. Most of the servings at Chef Mau are native Filipino fare but many are cooked with a creative twist. Not only was the food excellent, the prices are very, very reasonable too. We had a really hearty meal and was surprised to find out that it cost our party of seven less than P200 each - and that even included drinks and tips. Another surprise was Arabela, a restaurant located at the town center and on the street next to Gat Tayaw near the footwear shops. We've been here before in 2012 when we got to enjoy their Italian fare (pastas, pizzas and the like). Believe us it is very close to the real thing. On our second visit we trooped over to this place to try more of their coffee and dessert and it was equally great. And reasonably priced as well. Coffee and dessert at Arabela.

The vibrant atmosphere at the footwear paradise in Gat Tayaw Street, the historical feel of the old houses, the colorful San Juan Bautista Church and the various dining establishments in town combine to give the visitor an impression that no other town in Laguna seems to possess. It's an interesting but complementary mix of the old and the new, the reflective and the festive, the traditional and the innovative. It wasn't long after our last sips of coffee at Arabela and we soon had to say goodbye to a place that we knew we would be itching to visit again in the future.

The Batis and Other Attractions

Oh yes, we almost forgot the attraction that initially made Liliw famous: its many batis or cool mountain springs. You can observe some of these mountain streams as you pass through the national highway on the way to the town center. The resorts here are often built right along these streams and includes natural swimming areas and pools. The more popular ones areLiliw Resort and Batis ng Liliw located in Barangays Oples and Laguan respectively.

Go to this section for directions going to Liliw town proper. Note that Liliw is the next town after Nagcarlan on the way to Majayjay.