The Capitol Park and Lagoon is a provincial park located in Bacolod City, Negros Occidental. One of the features of the park are matching sculptures depicting a woman standing alongside a water buffalo and that of a man pulling another water buffalo. 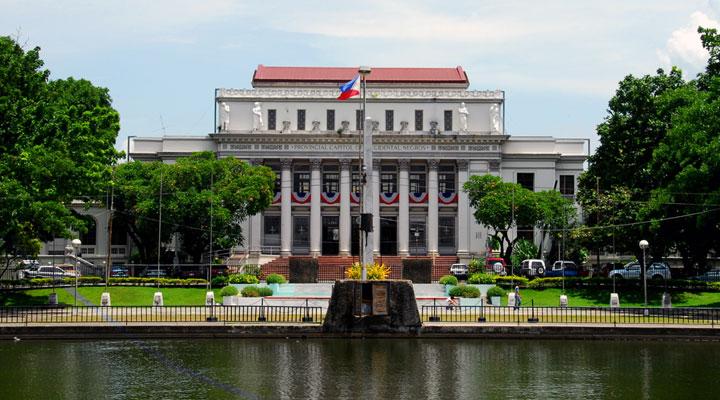 The Capitol Park and Lagoon is a provincial park located in Bacolod City, Negros Occidental. One of the features of the park are matching sculptures depicting a woman standing alongside a water buffalo and that of a man pulling another water buffalo. These sculptures are located at the northern and southern ends of the lagoon. These figures were executed by Italian sculpture Francesco Riccardo Monti who also did the sculptures of the Metropolitan Manila Theater and the University of the Philippines - Visayas Iloilo campus. Guillermo Tolentino also contributed as a sculptor of the figures.

Popular activities at the park include jogging, aerobics, school dance rehearsals, promenading, Arnis and martial arts practice, and feeding the tilapias of the lagoon.

The main landmark in the park is the Negros Occidental Provincial Capitol building. It is the official seat of the Governor of the province. Different government offices of the province serving its thirteen cities and municipalities are also located in the vicinity of the park.

The first Panaad sa Negros Festival, also known as the Panaad Festival, was held here in a three-day affair in 1993 that began April 30. The festival was held at the Capitol Park and Lagoon is fronting the Provincial Capitol for the first four years. As the festival grew each year, it became necessary to look for a more spacious venue. In 1997, the festival was held at the reclaimed area near the Bredco Port. The construction of the Panaad Stadium and sports complex paved the way for the establishment of the Panaad Park as the permanent home of the festival.

The park today has become a popular spot for local families to hold picnics on Sundays and holidays and a major tourist attraction of Negros. A man-made lake or lagoon in the middle of the park contains live tilapia fish. The park has recreational value as well, as bands, orchestras and other forms of entertainment are provided for free in its open-air auditorium in events aptly called "Concert at the Park".

The city of Bacolod is only 55 minutes from and to Manila, serviced by the country's 3 major airlines - Philippine Airlines, Cebu Pacific and Air Philippines, with four round trip flights daily.

From Cebu City, Bacolod is only 30 minutes away, with 3 round trips daily through Philippine Airlines and Cebu Pacific.

The New Bacolod-Silay Airport of International Standard is 20 minutes to and from the Bacolod downtown.

Bacolod is normally a 20-hour cruise to and from Manila aboard world-class vessels; 55 minutes to and from Iloilo on fast sea crafts.  The Banago and BREDCO ports are the vessels’ entry point.

By sea and land

The 18-hour travel time to and from Manila via land and sea transport is now possible through RORO (Roll On Roll Off) vessels traversing through the Strong Republic Nautical Highway using the ports of Iloilo, Caticlan in Aklan, Roxas in Mindoro and Batangas in the Province of Batangas.