Our Lady of EDSA Shrine: Patroness of the Bloodless Revolution

Another product of the EDSA Revolution is the Our Lady of EDSA Shrine, located at the crossroads of EDSA and Ortigas Avenue. It was built by grateful Filipinos to honor the Virgin Mary for her protection and guidance during the world-renowned bloodless ouster of the Marcos dictatorship that led to the return of democracy in the Philippines. 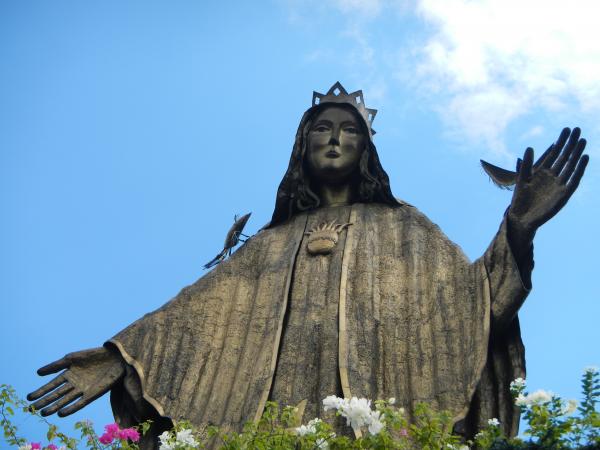 Another product of the EDSA Revolution is the Our Lady of EDSA Shrine, located at the crossroads of EDSA and Ortigas Avenue. It was built by grateful Filipinos to honor the Virgin Mary for her protection and guidance during the world-renowned bloodless ouster of the Marcos dictatorship that led to the return of democracy in the Philippines.

The idea of a commemorative shrine was conceived by Cardinal Sin two days after the Marcos family fled into exile in 1986. He approached the Ortigas and Gokongwei families who agreed to donate the prime corner lot where the nuns and ordinary men and women bravely stood in front of military tanks and offered flowers to the soldiers. 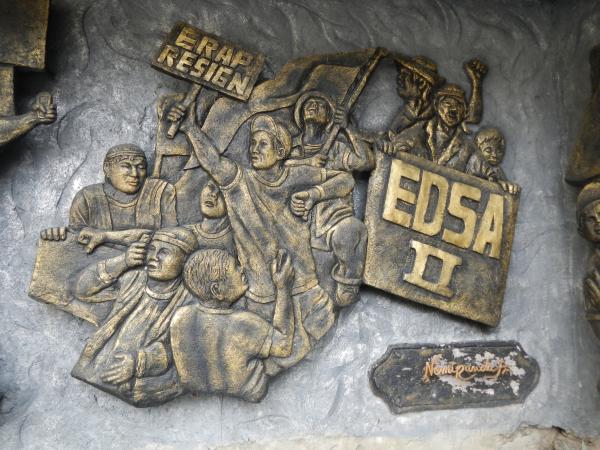 Architect Francisco Mañosa created the architectural and structural design for the church, with preparatory work from national artist Leandro Locsin and Architect William Coscolluela.  Throughout the plaza are the 14 Stations of the Cross as rendered in bronze by national artist Napoleon Abueva. The imposing bronze image of the Our Lady of Queen of Peace, sculpted by Virginia Ty-Navarro. 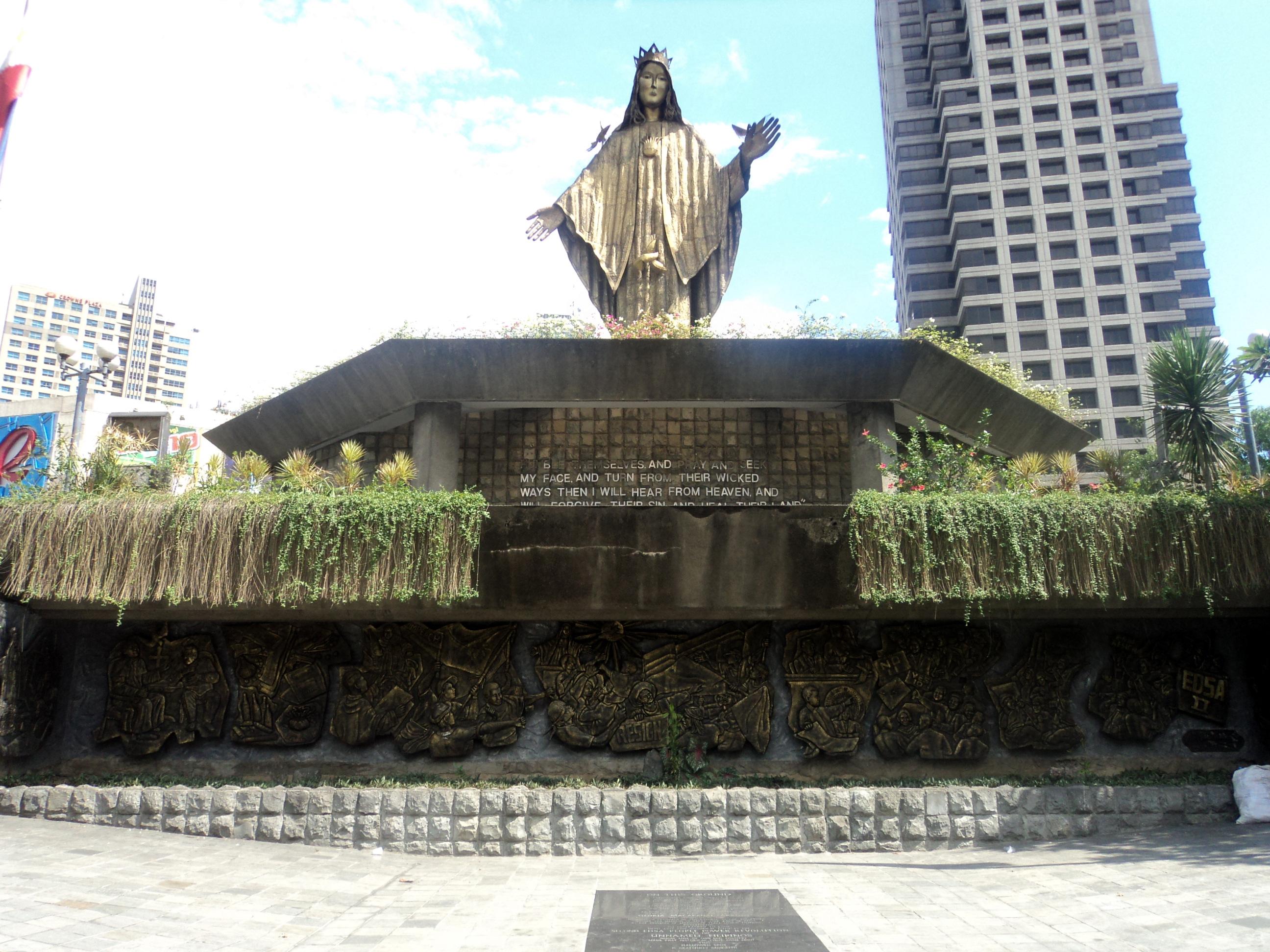 The People Power Revolution (also known as the EDSA Revolution and the Philippine Revolution of 1986) was a series of popular demonstrations in the Philippines that began in 1983 and culminated in 1986. The methods used amounted to a sustained campaign of civil resistance against regime violence and electoral fraud. This case of nonviolent revolution led to the departure of President Ferdinand Marcos and the restoration of the country's democracy. It is also referred to as the Yellow Revolution due to the presence of yellow ribbons during the demonstrations and the arrival of then assassinated Benigno Aquino, Jr. It was widely seen as a victory of the people against the 20-year running authoritarian, repressive regime of then president Ferdinand Marcos and made news headlines as "the revolution that surprised the world". 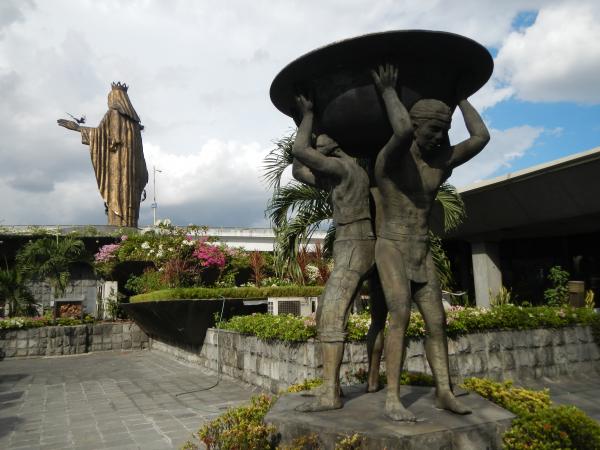 The majority of the demonstrations took place on a long stretch of Epifanio de los Santos Avenue, more commonly known by its acronym EDSA, in Metropolitan Manila from February 22–25, 1986 and involved over two million Filipino civilians as well as several political, military, and including religious groups led by Cardinal Jaime Sin, the Archbishop of Manila. The protests, fueled by the resistance and opposition from years of corrupt governance by Marcos, culminated with the departure of the dictator from the Malacañang Palace to the United States state of Hawaii. Corazon Aquino was proclaimed as the legitimate President of the Philippines after the revolution.

On 25 February 2015, the Philippines celebrated the 29th anniversary of the People Power Revolution.

Here is the list of some of the accommodations that can be found around the city of Quezon. It offers good services and comfortable rooms for all visitors.

Public transportation within the city, like in most of the urban areas in the Philippines, is facilitated mostly using inexpensive jeepneys and buses. Tricycles give access to more secluded areas, while taxi cabs are available to navigate any course.

This City has 3 Circumferential Roads. The following are:

An elevated rail transit system (MRT-4) that was supposed to follow the general alignment of Quezon and Commonwealth Avenues (R-7) was shelved. In its place, a 22 kilometer rail system will be built. The MRT-7 project will commence at North Avenue, connecting the MRT-3 at its northern terminus. It will then go through Commonwealth Avenue, then through Regalado, Quirino Highway, ending in San Jose del Monte, Bulacan. The system has a proposed spur line to connect itself to MRT-2 in Katipunan, passing through the University of the Philippines Diliman and Katipunan Avenue.

The following elevated railway stations in the city (Only 13 Stations):