Our Lady of Peace Grotto of Camarines Sur

Our Lady of the Most Holy Rosary, Mother of Peace Grotto is located at the top of Caglago Mountain in Barangay Tabgon, Caramoan, Camarines Sur. A flight of 524 steps (530 if the landing is included) to the grotto leads to the 26-foot image of the Blessed Virgin Mary. 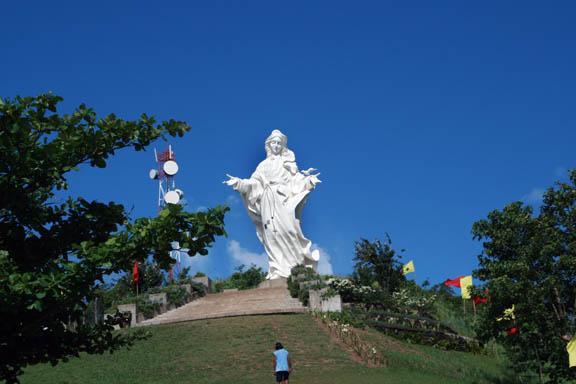 Our Lady of the Most Holy Rosary, Mother of Peace Grotto is located at the top of Caglago Mountain in Barangay Tabgon, Caramoan, Camarines Sur. A flight of 524 steps (530 if the landing is included) to the grotto leads to the 26-foot image of the Blessed Virgin Mary.

The construction of Our Lady of the Most Holy Rosary, Mother of Peace Grotto began in 1989 under the leadership of St. Dominic of Guzman parish priest Rev. Fr. Felix F. Barella. During its construction, the people of Caramoan had to climb Mt. Caglago to bring the materials. It was completed the following year through foreign and local funding. The grotto opened its door to the public in 20 May 1990 led by Archbishop of Caceres Most Reverend Leonardo Z. Legaspi OP. D.D.

The Eucharist is celebrated in the Shrine every first Sunday of the month and other occasions such as the anniversary of the foundation of the image (20th of May), Triduum, and feast of the Our Lady of the Most Holy Rosary, Mother of Peace (4th of October).

The Marian image (image of Our Lady) is the biggest in the Philippines. The image is lighted at night to guide the fishermen back to the shore of Tagbon. From afar, the image resembles the out-stretched arms of Jesus in Rio de Janeiro in Brazil.

In 21 October 1998, super typhoon Loleng ravaged the whole town of Caramoan and did not spare the Marian image. Deep cracks appeared around the image, part of the mantle was blown off, and few fingers were lost. In 1999, the image of Our Lady was struck by lightning that caused serious damage on it. The restoration of the image proved to be futile as weather conditions continuously ran bad in the town. Instead of restoring it, Archbishop Legaspi was presented by a proposal to replace the image of Our Lady during the priest's assembly in 11 May 2000 at the parish of St. Joseph, San Jose, Camarines Sur.

Rev. Msgr. Juan N. Buentiempo commissioned Ben Nierva to make the second sculpture of the Marian. Nierva finished the sculpture in 1 May 2008. Since then, the grotto became a regular venue of Via Crusis during holy week.

The presence of Ina (Blessed Mother) has drawn pilgrims to Mt. Caglago and has wrought miracles in the lives of believers. In 2-8 April 1999, the Second Archdiocesan Youth Pilgrimage (AYP II) was held in the Shrine. Over a thousand pilgrims gathered and spend the night in prayer and fellowship. In May 2000, during the occasion of the Great Jubilee Year, the Shrine was declared as one of the pilgrimage sites in the Archdiocese of Caceres.

By Air: From Manila, Cebu Pacific flies 3 to 4 times a day; Air Philippines/PAL Express flies twice per day (45 mins) and Zest Air flies daily to the Naga Airport (actually in Pili about 10kms East of Naga)

By Land: You can go to Cubao Terminal or Pasay Bus Terminal where buses going to Naga Camarines Sur can be found. Buses operate daily going to Bicol.

In downtown, Naga City you can roam around just by foot. If you don't prefer walking, tricycles and jeepneys are the main transportation and Taxi are also available since 2010 the opening of SM City.

Trisikad, padyak or manpowered tricycles are also available in areas that mostly aren't included in jeepneys and tricycles routes.

Buses, vans and Jeepneys are mostly use traveling outside the city going to connect the towns of Camarines Sur and Taxi as well but with a double charging or depending on your price negotiation with the driver.

For other municipalities jeepneys, tricycles and trisikad are available as a mode of transportation around the province.

There are lots of inns and pension hotels in the province that will give great accommodations during your days in Camarines Sur.