Palo Alto: Waterfalls at Our Backdoor

Palo Alto is a 200 hectare residential and commercial estate currently being developed by Sta. Lucia Realty. 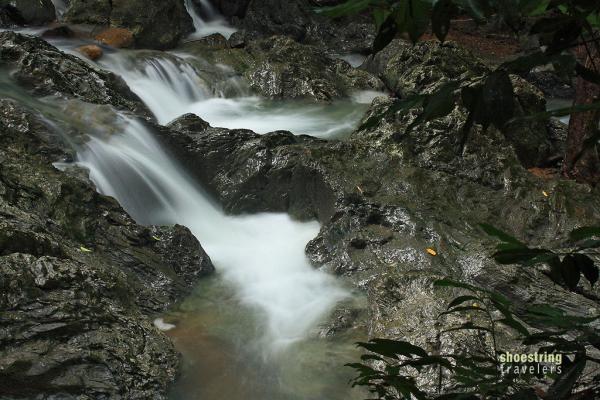 There's never a shortage of natural attractions that one can chill in within two to three hours from the Manila metropolis. Laguna with its waterfalls at Kalayaan, Los Baños, Nagcarlan and Majayjay (not to mention Pagsanjan and Siniloan) has always been on our travel radar for some time now. But just recently we realized we didn't even have to travel that far. There are waterfalls in Baras and Tanay, both in Rizal province, which are located even closer to Metro Manila. 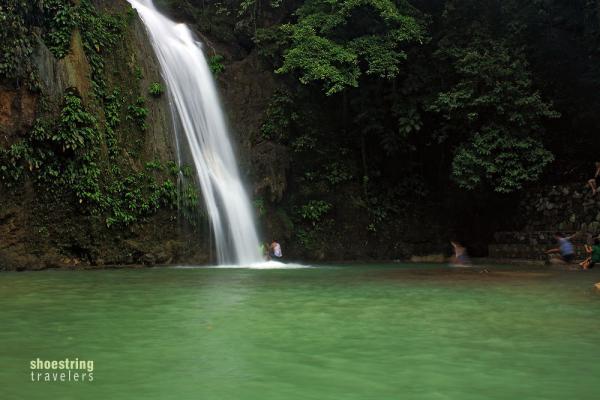 We were driving through Baras, Rizal on our way to Tanay via the Marcos or Marilaque (Marikina-Rizal-Laguna-Quezon) Highway when we saw this huge billboard featuring an adventure park with a waterfall in front of the Palo Alto Leisure and Residential Estates in Brgy. Pinugay, Baras. Leo had seen the falls inside Palo Alto in other blogs before but really didn't think much about it. However, after a short discussion, we decided to give it a go. And fortunately so. 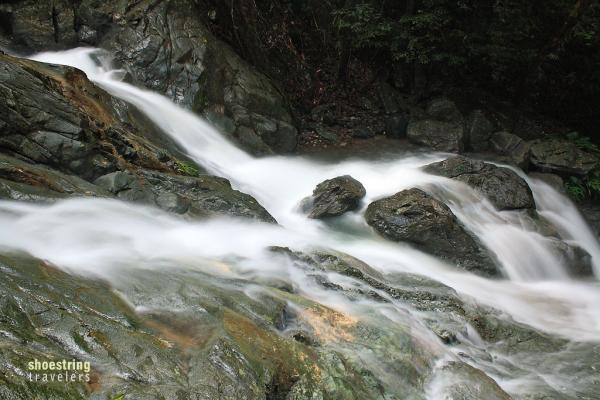 A stream cascading down through huge rocks at Palo Alto.

Palo Alto is a 200 hectare residential and commercial estate currently being developed by Sta. Lucia Realty. For the time being the falls and even the clubhouse are open to the general public. The receptive and informative guard at the gate was proof of that. At the entrance to the falls we learned that entrance fees are waived off if you only intend to take a look at the falls and the facilities. A sign at the parking area indicated a climb of 249 steps to get to the main falls which is about 1,000 feet up. This may sound intimidating at first but we soon realized that the walk is made easier by the concreted pathway and hand rails at the stair sections; without stopping one can make the climb in about 10 minutes or so. The concreting of the pathway (or is it stone blocks simply cut and set in place) was done in such a way as to blend in with the natural surroundings. 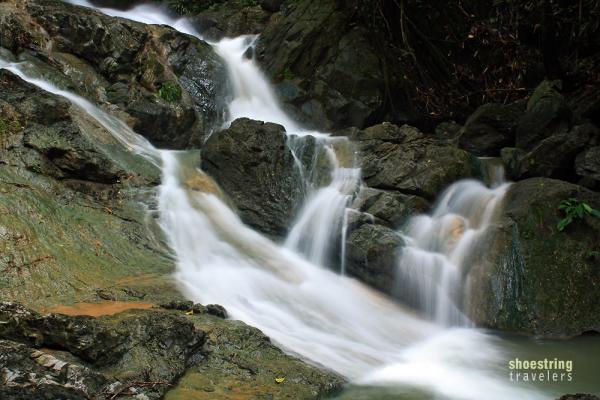 Some of the several mini-waterfalls along the stream leading up to the main falls at Palo Alto.

What made the uphill walk easier was the sight of a stream winding its way down through huge rocks with a lush green forest all around. At numerous points along its length, the stream would drop off a few meters into small emerald pools, resulting in several small cascades so pleasing to the eye. We were the only ones climbing up the falls on this day and the sound of water gently cascading over jagged rocks gave a soothing, tranquil feeling. 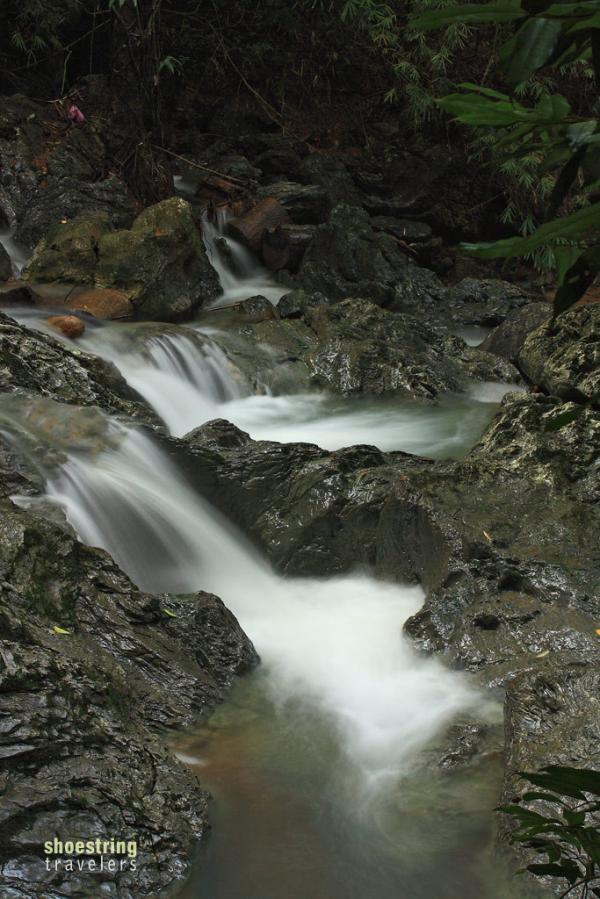 A sight for sore eyes: mini cascades at the stream inside Palo Alto.

We stopped at several intervals along the stream, catching our breath before our ascent up the next flight of stairs, taking photographs and just enjoying the view. All the while we couldn't help but be amazed that such a secluded natural wonder could exist inside a residential/commercial estate. 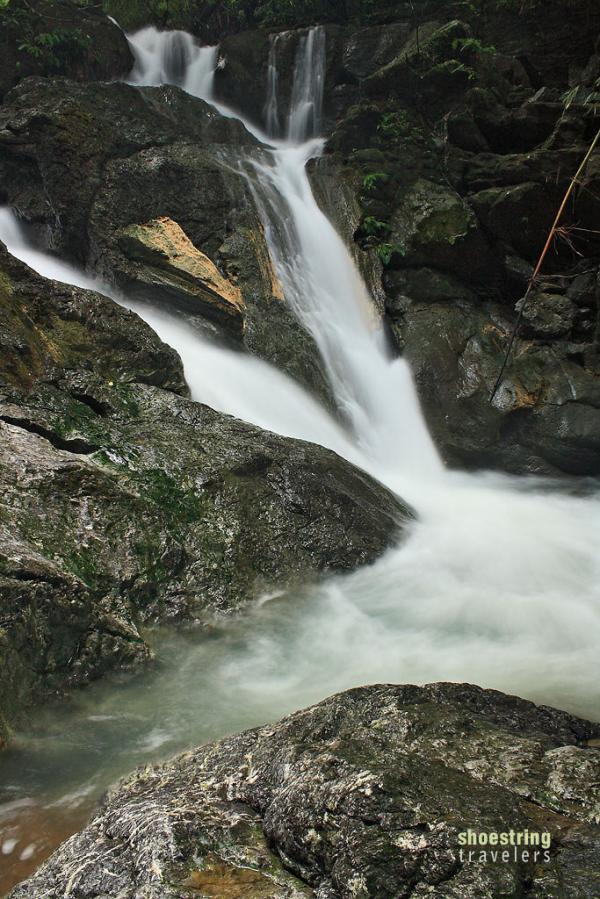 After the 249th step we were finally at the main falls. Standing about 60 feet, the waterfall drops down into a catch basin that had been walled in by the developer to form a swimming pool for guests. The water is clear and the area around the falls well-maintained. There are small native cottages for rent if you want to picnic here. There is also a store beside the cottages selling snacks and drinks. 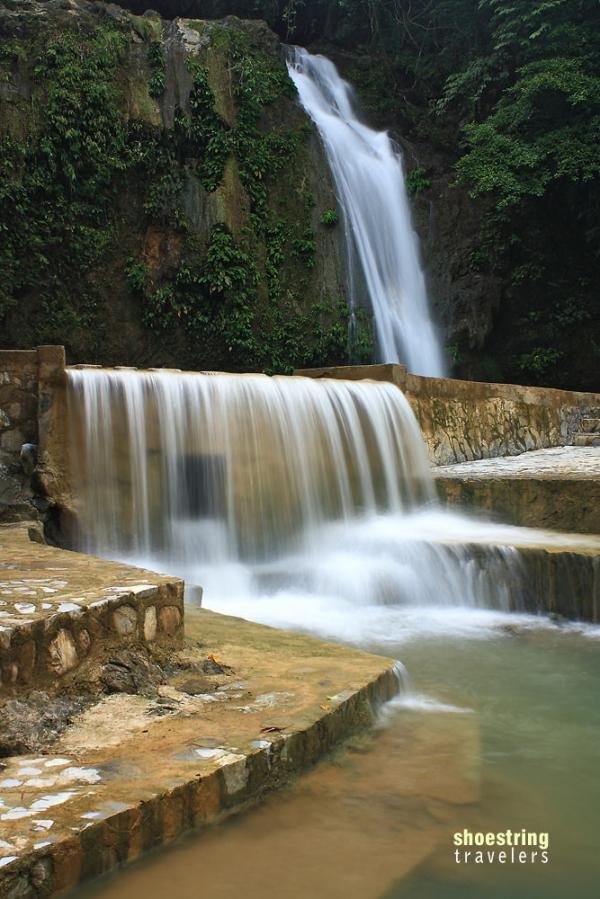 The main falls inside Palo Alto with stone steps leading to the main pool and falls.

We did not plan on dropping by Palo Alto on this trip. We were headed first to Paseo Rizal in Tanay before driving on towards Daranak and Batlag Falls. We only thought about passing through the Marcos or Marilaque Highway for scenic views of the Sierra Madre foothills but did not really plan to visit Palo Alto with our limited available time. But as it often happens, the best part of a trip is the part that goes unplanned. What makes Palo Alto falls so appealing is that it is so near the metropolis – about an hour or so away by car from Cubao, Quezon City – making it a very favorable option for a short but relaxing trip in the near future. 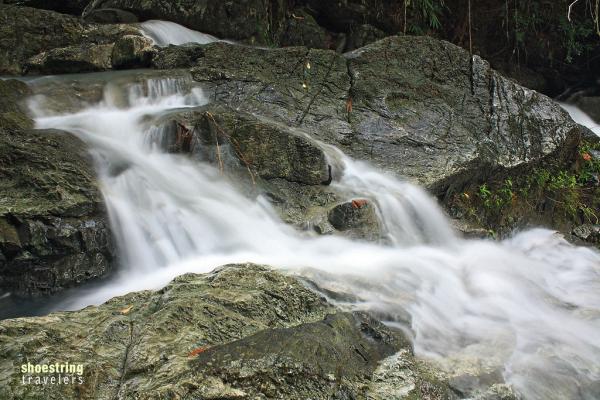 By car: Getting to Palo Alto is especially convenient if you're coming from the Marikina-Quezon City area. If coming from Cubao, Quezon City, simply drive straight through Aurora Boulevard and on to Marcos Highway. Drive straight on through Marcos Highway past Masinag and Cogeo in Antipolo. You will pass by the Boso-boso Resort which is less than 10 kilometers away from Palo Alto. As mentioned earlier there is a big billboard in front of Palo Alto that is hard to miss. It is possible to make this drive in just an hour through light to moderate traffic. We were in Palo Alto well within an hour from SM Marikina.

If commuting: At Cubao (Mercury Drugstore) take a jeepney or UV Express to Cogeo market. At Cogeo take a jeepney bound for Sampaloc, Tanay. This will pass in front of the Palo Alto entrance gate on the Marcos or Marilaque Highway. (There's a long walk to the entrance of the falls from the gate, however, and we couldn't see any trikes inside Palo Alto that can take you there.) 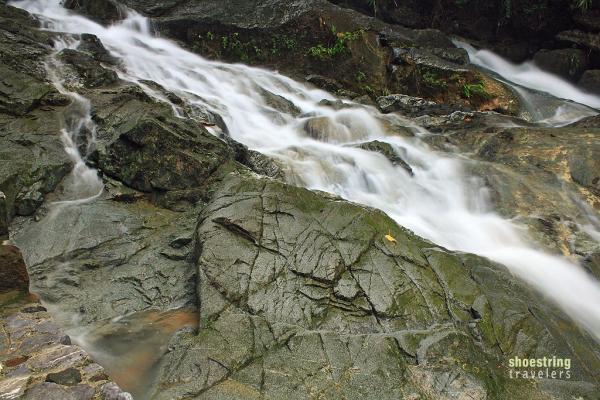 Marcos Highway is also called Marilaque Highway for Manila-Rizal-Laguna-Quezon. It is a scenic road with beautiful views of the Sierra Madre foothills and goes through the towns of Baras and Tanay before continuing on to Infanta, Quezon. Driving through this highway was in itself already a highlight for us and a friend who accompanied us on this trip. The cool mountain air, the scent of pine trees and the lush greenery reminded us very much of Baguio City and our six-year stay in the summer capital of the Philippines.