It’s an ideal place for a quiet getaway from the hustle and bustle of city life. A long, white sandy beach with calm waters offering plenty of space for a leisurely stroll. 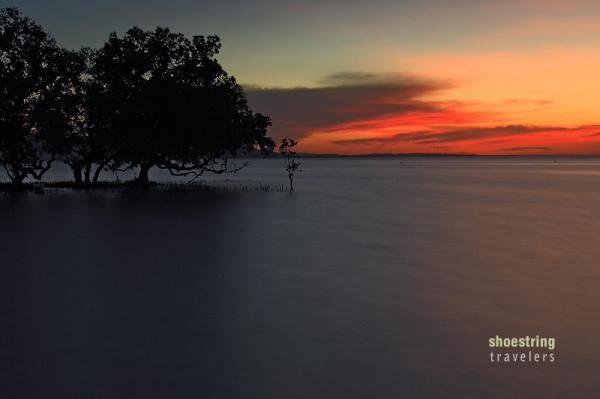 It’s an ideal place for a quiet getaway from the hustle and bustle of city life. A long, white sandy beach with calm waters offering plenty of space for a leisurely stroll. A thick expanse of trees providing a cool shade throughout the day, leaves rustling gently in the late afternoon wind. The occasional passing tourist or local leaving you with a friendly greeting. And the sunsets...

We came to Sandugan Beach in Larena on our first day in Siquijor Islandand would eventually call it home for the rest of our short stay on the island. Nestled in the northernmost tip of Siquijor, Sandugan is a quiet and secluded place in an already laid-back island, perfect for the restful vacation we were looking forward to. Every morning, the low tide would reveal a large expanse of white sand in long, fine ripples. Mornings also greeted us with the sight of local folks gathering shells and sea urchins as fishing boats begin arriving with their catch after their early morning expeditions. 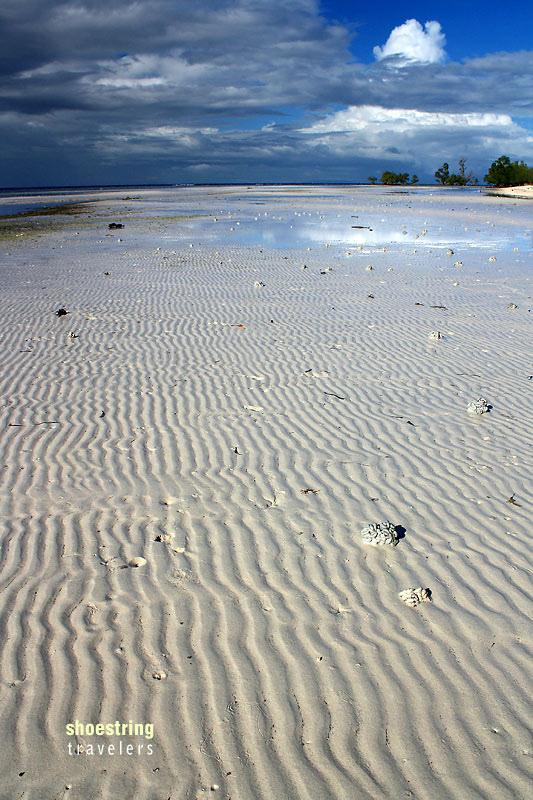 Home during our two-day stay here was Kiwi Dive Resort. It’s a relatively small resort with seven cottages. We ended up at one located just a few steps away from the beach. We spent considerable time at Kiwi’s reading and resting under the shade of trees while enjoying the beach scenery. This included the remarkable sunsets for which Larena and the towns of Siquijorand San Juan are famous. For two nights we were treated to magnificent sunset views – although according to the resort staff the sunsets are more spectacular with a bit more cloud cover. 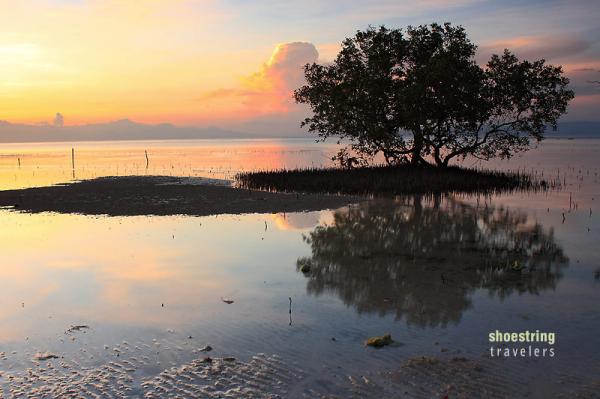 Sunset by the mangroves at Sandugan Beach’s northern end. 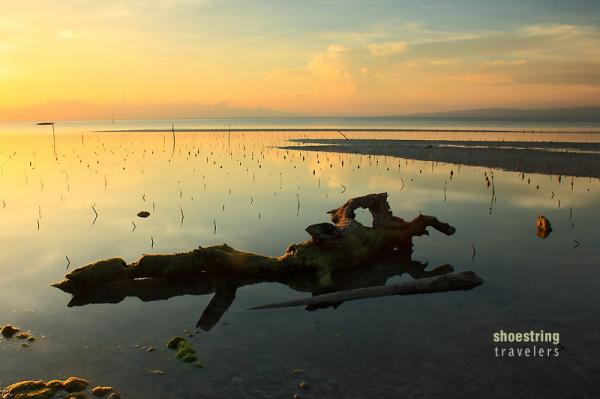 There were plenty of mud skippers jumping about this piece of wood at Sandugan’s northern end.

One thing we noticed about Larena and the nearby town of Enrique Villanueva was the proliferation of mangroves in several spots along the coastline. Mangroves are indicative of healthy marine ecosystems and indeed when we visited one cluster in the northern part of Sandugan Beach we encountered several marine inhabitants. There were literally hundreds of small crabs along the beach, several starfish, shellfish and even athletic mud skippers showing off their leaping ability when we came across them. And plenty of birds as well including sand pipers, the occasional egret and brightly colored, neon-blue kingfishers all benefiting from the abundance of food at this location.

There are a few other resorts in Sandugan Beach but this area is one of the quieter ones in the island. We could stroll down to the beachfront of the other resorts and not encounter a lot of other tourists (again most were foreigners), unlike the resorts we saw in San Juan. 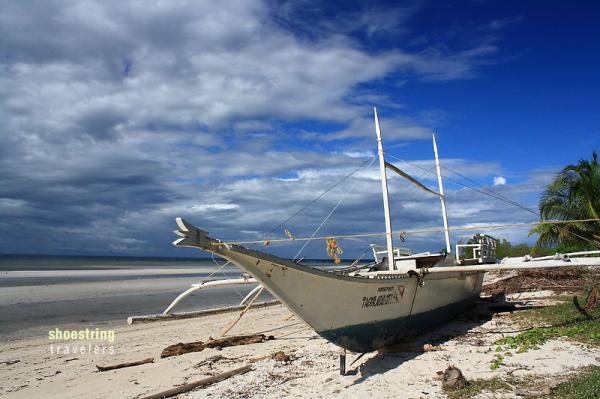 Beached boat somewhere in the northern part of Sandugan Beach.

Kiwi’s staff are very friendly and accommodating – quite representative of the people of this island actually. It’s a dive resort so they naturally offer diving – and with rates that are relatively inexpensive. We had a good chat with their dive master who said that the waters off the resort provide good diving and that many colourful corals may be observed in the vicinity. More spectacular according to him is the Tulapos Marine Sanctuary at Enrique Villanueva where one can observe schools of barracuda.

This town was actually the first one we came across after Larena on our first day of touring the island and just before the town of Maria. It’s probably the least known of all towns in the island but no less beautiful. The national highway passes along the entire coastline of Enrique Villanueva and allows a good view of its beaches and its many mangrove clusters. The Tulapos Marine Sanctuary mentioned above is located near one of these clusters and is the biggest in the island. What we missed while passing through here are the spectacular sunsets with the mangrove trees as backdrop. 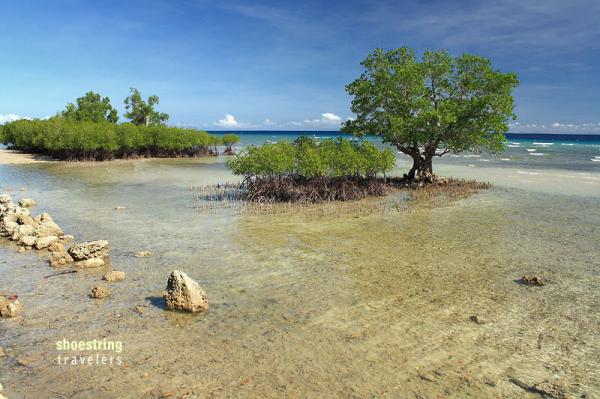 One of the mangrove clusters at Enrique Villanueva at low tide.

Along the road to Maria we passed by the Cang-Isok House which is reputed to be the oldest in the island and said to be a few centuries old. It is no longer inhabited and has been visibly damaged by a recent typhoon. Our trike driver Dondon did not stop here so we assumed it wasn’t as worthwhile a stop as other destinations but it was still an interesting landmark. Some say that it’s a haunted place – something that you often hear about other places in Siquijor – although we did not experience anything unusual during our stay on the island.

In the towns we passed through on our first day of touring we also noticed that several of the school buildings are relatively old – they appear to have been designed and built in the 1950s and 1960s – but all are well-preserved. Likewise there are many old but relatively intact houses, most of them constructed of timber. 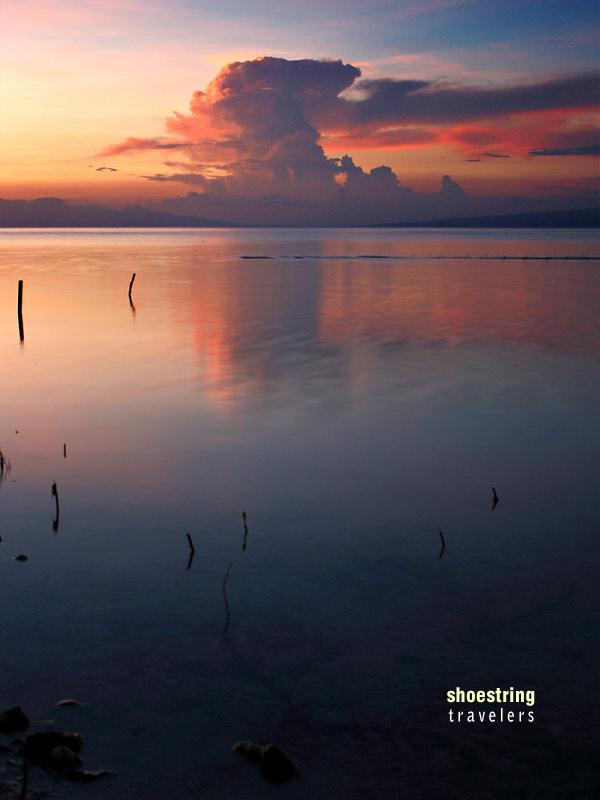 Colorful end to a day in Siquijor: pastel-colored sunset scene at Larena.

As the commercial center of Siquijor island and province, Larena has its own port. You can reach it via a ferries from Dumaguete. (Go to our general article on Siquijor province for more details on these ferry rides.) If you’re booking a stay at any resort in Larena it’s better to catch a ferry ride to this town than to the port at Siquijor town. From the port you can take a trike to your destination at Larena, usually for P150. We decided to have lunch first at a chicken inato house in town, then had a local charter a trike for us at P100. Some travellers will opt to walk from the port all the way to the main road then flag down a trike for an even cheaper ride.

There are several resorts along the coast, many of them located right on Sandugan Beach. One problem with these resorts is that you have few options to eat elsewhere at short notice. For more dining options you either have to walk to the main highway and wait for a passing trike to get to town or walk to other resorts in the vicinity. In most cases food served at the resorts are more expensive than at restaurants and other dining places in town. It’s also difficult to get a trike ride back to your resort in the evening. At our resort we noticed some guests who came from other nearby resorts for dinner. 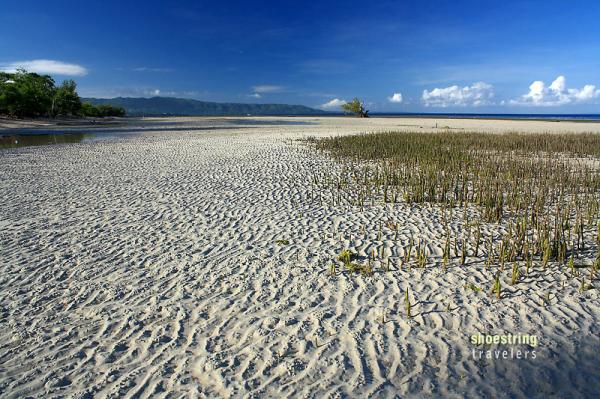 (Note: If you have the time try the Larena Triad Coffee Shop located near town and at the top of a hill. We can’t vouch for their food, never having been there, but we’ve heard they offer excellent panoramic views of the town and coast.)

All in all we were very satisfied with our time in Larena. We wanted a quiet and restful stay and got what we wanted and more. We won’t think twice about revisiting this place.