Sarao Jeepneys: Only in the Philippines!

The jeepney has become a mainstay in Philippine thoroughfares since their inception after the years of World War II. Jeepneys have become a testament to the boundless ingenuity and imagination of the Filipino, and have become the icons of urban Filipino life. 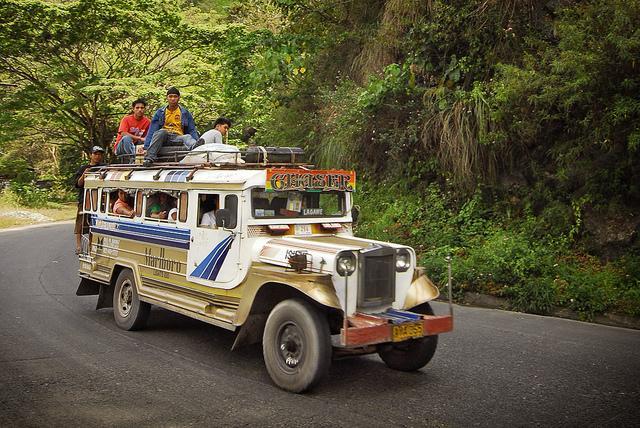 The jeepney has become a mainstay in Philippine thoroughfares since their inception after the years of World War II.  Jeepneys have become a testament to the boundless ingenuity and imagination of the Filipino, and have become the icons of urban Filipino life.

If New York has its famed yellow cab and London has its tube (subway), then the Philippines has the jeepney as its most popular and widely recognized form of transportation. Crowned the “king of the road” because of their bulky box type frame and because of the notorious way that drivers would jostle their way in and out of traffic, the jeepney is actually a remnant World War II.  After the war between the Americans and the Japanese, hundreds of Willy jeeps were left behind.  Filipinos saw the potential in attaching a roof, extending its length by two meters to and adding two rows of seats to fit additional passengers, and the Philippines’ earliest form of a “share shuttle” was born.

The jeepney dominated the narrow streets because it was flexible enough to weave in and out of them—despite its heavy frame.  Though nimble, the jeepney was also sturdy enough to hold anything from fruits to animals on its roof.

The brand name that has actually come to mean jeepney is “Sarao,” the company that first started out making them in 1953 and became famous the world over for doing so.

The Success of Leandro Sarao

Leandro Sarao, the founder Sarao Motors, was once a kalesa driver or cochero.  Armed with capital of Php700, the skills he acquired working in an automotive repair shop, he and his brothers set out to make jeepneys, with each section meticulously fashioned by hand, laboriously going over each detail that makes each and every jeepney distinct.

They say that no two jeepneys are alike and the personalization of the jeepney is also a large reason why this mode of transportation has so endeared itself to the public and tourists alike.  The world’s fascination with the jeepney saw Sarao exporting units to Japan, Germany and Malaysia. Once, Sarao jeepneys were exhibited in the New York World’s Fair. Unfortunately, because of changes in government regulations on transportation franchises, the company had to cease mass production in 2000.

Today, the sons of Leandro Sarao still run the company in the Sarao jeepney factory, where they still produce jeepneys in the same way that their father and his brothers did—by hand and with meticulous attention to detail—albeit in smaller quantities. 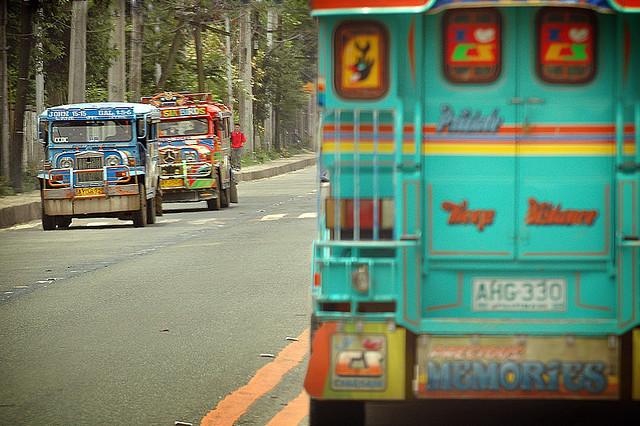 Jeepney art: the more the merrier

• No two jeepneys are alike with its bare frame made of metal panels mostly being able to accommodate any kind of art.
• The more, the merrier seems to describe the concept of jeepney art that is marked by accessories called borloloys in the form of mirrors, horns and tassels.
• Art is painted on its sides which can be anything from religious pictures, to super heroes and NBA players. They can also become a testament to art and what others call street art.
• And of course who can forget the sayings found on the jeeps.
• Basta dryber, sweet laber (A driver is a sweet lover)

Do you know why they are called “jeep-knees”?

Jeepneys seats are always filled to the brim. Maximizing space (and earnings), passengers are squished inside a jeepney and sit in various seating patterns (in-out) and still, always some new passenger will be added.

They say that sitting in a jeepney, your knees will unavoidable touch the knees of your neighbor, thus the name: jeep-knees! :)

The Sarao jeepney factory in Pulang Lupa, Las Piñas continues to draw the curiosity of visitors from various corners of the globe and has become a regular tourist stop over for those who have heard of the famous jeepneys and want to see them up close.