Taal, the birthplace of quite a number of Philippine national heroes, is considered a heritage landmark by the National Historical Institute. 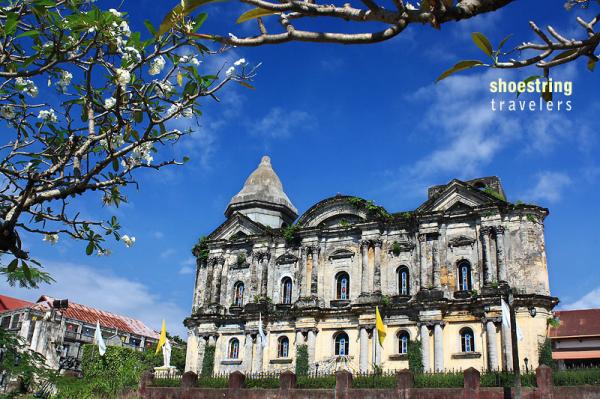 You may also check these sites:
https://www.shoestringtravelers.com/?q=node/67

Looking to visit a place a little bit further from Tagaytay, we decided to head out to Taal town, a place we’ve sometimes passed by on our way to some of the beaches in Batangas but never really got to explore. Our primary interest in visiting Taal was the collection of Spanish colonial era-ancestral houses – something of a smaller-scale version of Vigan in the Southern Tagalog region. We later learned that Taal, the birthplace of quite a number of Philippine national heroes, is considered a heritage landmark by the National Historical Institute.

It was a little bit intriguing to realize that a town named after the famous volcano and lake is actually located away from both geographical landmarks. A little research revealed that Taal town, the former capital of Batangas province, used to be located along the lake’s shores until the 1754 Taal volcano eruption – the biggest and most catastrophic in the volcano’s recorded history – forced its move to its present location. 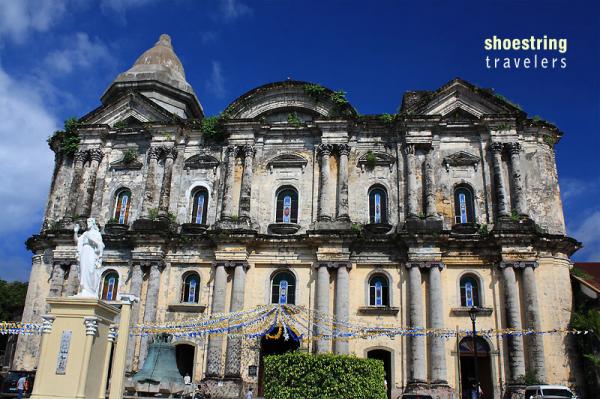 The Basilica of St. Martin of Tours is the biggest church of its kind in Asia. 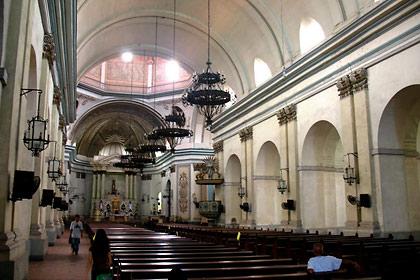 The interior of the Basilica of St. Martin of Tours.

Heading out to the Tall municipal hall and town center to park our car, we first came across the Basilica of St. Martin of Tours - the biggest church of its kind in Asia. This imposing structure was first built in 1755, but like other old churches in the country, had to be rebuilt after it was destroyed by an earthquake a century later. 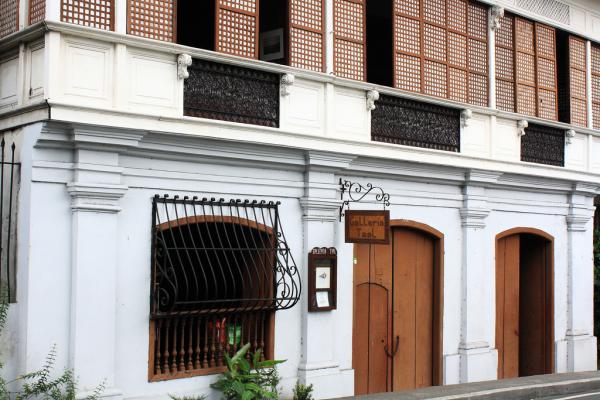 In and around the main street from the basilica are rows of 17th to 19th century ancestral houses which like those in Vigan are constructed using stone masonry at the ground floor and wood on the second floor. Many have been well-preserved. On many of them the windows are made from capizshells which reminded Leo of his grandparents’ ancestral home where he spent his first 5 years. One of the more prominent ones is the Villavicencio Ancestral House, the home of Doña Gliceria Marella de Villavicencio, known as the Godmother of the Philippine revolution against the Spanish. Our first visit to Taal was on a Monday and to our disappointment we found out that the house – like most of the ancestral bahay-na-bato homes in Taal – was closed to visitors. On our second visit therefore, we made sure to arrive on a day other than Monday to be able to see the interesting interiors of these houses. 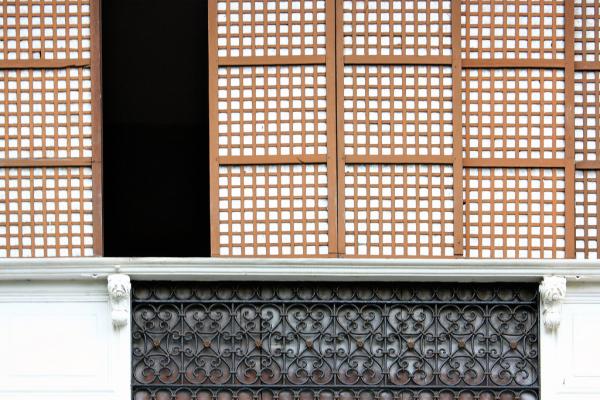 Many of the houses have capiz shell decorated windows.

The Don Leon Apacible House is located along the main road leading to the town center. The brick-red and white house has been donated to the national government by the heirs of Don Leon Apacible and has since been converted into a museum. (Leon Apacible was President Emilio Aguinaldo's Finance officer and a delegate to the 1898 Malolos Congress.) It is one of the best-preserved ancestral domains in Taal with museum personnel providing you with historical information about the house and its former occupants. A peek into the home’s interior reveals intricately-carved antique wooden furniture pieces, 18th century chandeliers, Ming dynasty pottery and beautiful narra flooring giving one an idea about the lifestyle of upper-class families during the late Spanish colonial period. There is no entrance fee to the museum although one can give a donation. 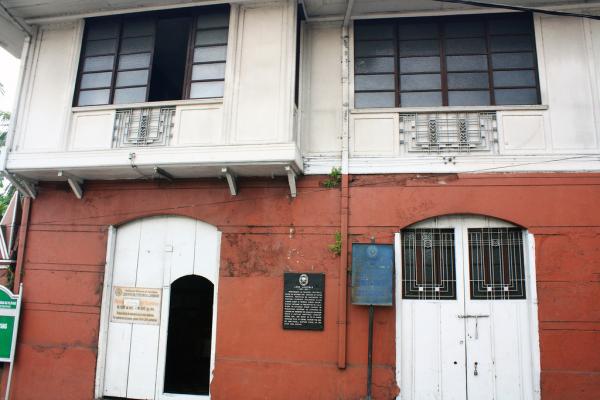 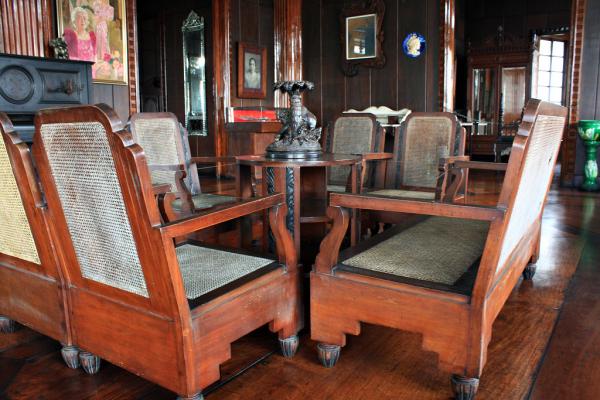 Inside the Apacible House with its antique wooden furniture and narra flooring.

Located close to the Apacible House is the Doña Marcela Agoncillo Museum. This former ancestral home goes back all the way to the late 17th century. Like the Apacible home, this house has been donated by the heirs of Marcela Agoncillo to the national government. Dona Marcela is best remembered for hand-sewing the first ever Philippine flag right at this very house. Such is the age of this house that you can see the upper wooden flooring slightly sagging from centuries of use, although in no danger of collapse according to Leo who used to be a practicing civil engineer. 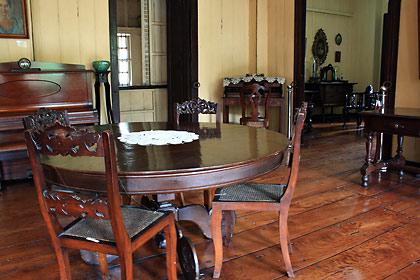 The interior of the Doña Marcela Agoncillo Houuse/Museum.
This house was built in thelate 17th century and is one of Taal’s oldest.

There are more ancestral homes around and close to the town center but with not a lot of time on our hands (again) we went back to the town hall where the car was parked and went off to explore more of Taal’s environs before heading back home. Interestingly, Taal has a beachfront although we decided not to go beach combing and instead headed off towards thebalisong (fan knife) shops that Batangas, and particularly Taal, is famous for. There are also several shops selling Barong Tagalogs made from piñaand eateries serving Tapang Taal. On both occasions on our way back to Metro Manila we spotted several stalls serving pansit lomi – a dish popular in these parts – but decided not to stop and instead headed straight for our favorite stopover in Tagaytay. Perhaps another time… 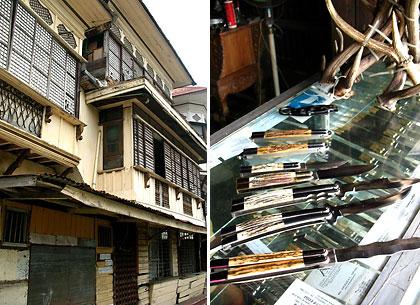