Mention Tacloban and one of the first things that comes to mind is the San Juanico Bridge. This 2.16 kilometer bridge was completed in 1973 and is the country’s longest bridge spanning a body of water. 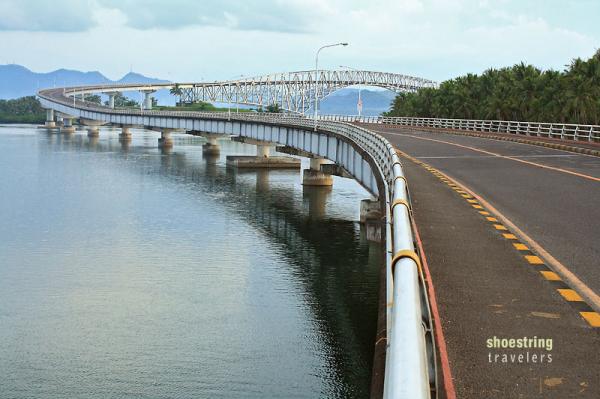 We’ve been to Tacloban in Leyte more times than to any other city in the Eastern Visayas. Our first two travels to this city – as part of our work back then &150; were almost 20 years ago and allowed us to tour and experience various parts of Tacloban. In Leo’s subsequent travels to this place, Tacloban served as a gateway to other spots in the region such as Biliran,Calbayog and Catbalogan cities in Samar. Such is this city’s strategic location in the region. 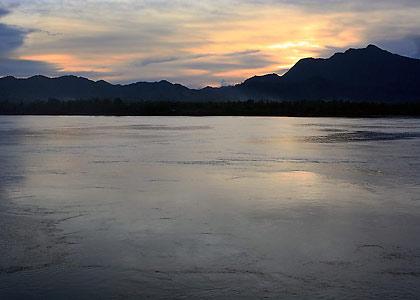 Sunset at the San Juanico Strait between Leyte and Samar.

Mention Tacloban and one of the first things that comes to mind is the San Juanico Bridge (top photo). This 2.16 kilometer bridge was completed in 1973 and is the country’s longest bridge spanning a body of water. It connects the islands of Leyte and Samar and has made Tacloban a primary transportation hub in the region.

San Juanico Bridge’s long, winding shape is fascinating – like a python snake slithering its way across the strait – and makes for an interesting subject for photography. San Juanico Strait with its islets, whirlpools and fast-moving current is equally interesting. The narrowness of the strait at this point no doubt has contributed to the two latter phenomena and makes swimming at this location a bit dangerous. The southern end of the bridge is at Brgy. Cabalawan in Tacloban. Once you cross over to the northern end you are instantly in Samar. 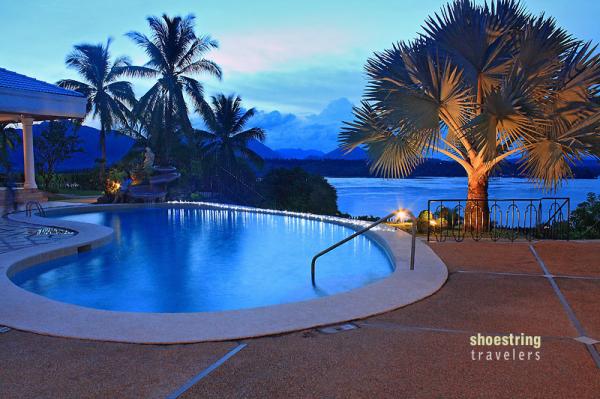 In his third trip across San Juanico Bridge Leo was surprised to find a restaurant on a hill on the Samar side that serves Italian cuisine.Pasqualino’s Ristorante is a relatively new fine dining restaurant somehow connected to the popular Guiseppe’s (see below) in downtown Tacloban. Located just 5 minutes away from the northern (Samar) end of San Juanico Bridge, it offers panoramic views of San Juanico Strait and – during the time Leo was there – some pretty good sunset views of the strait framed by Samar’s mountainous terrain. 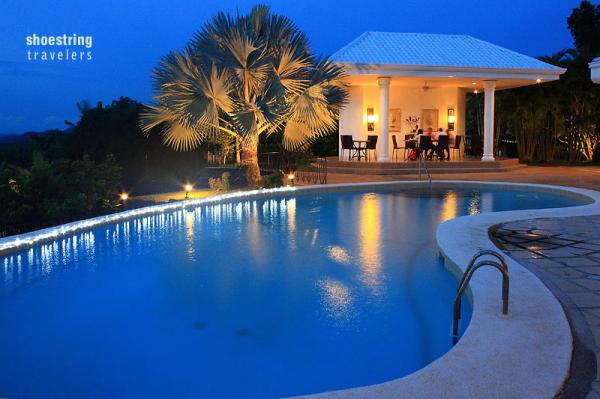 Pasqualino’s Ristorante has a swimming pool and interesting ambiance at night.

In downtown Tacloban, one can take the time to visit the Santo Niño Shrine and Heritage Center. Originally meant to be a luxurious rest house built according to Imelda Marcos’ specifications it now houses priceless pieces of art and a collection of expensive antiques. Leo was particularly intrigued by what looked like an example of Byzantine art that could be more than a thousand years old. The Sto. Niño Shrine includes 7 bedrooms originally built for the Marcos family (apparently never used), 13 guest rooms, conference or meeting rooms and a ballroom. Our jaws simply dropped not only at the magnificence of the art works displayed but more so at the spectacle of power and excess paraded right in front of our eyes.

Dining in Tacloban is one of the things one can look forward to on a visit here. We’ve already mentioned Guiseppe’s – a restaurant owned by Italian-American Joseph Bonavitacola and his wife Cathy Añover (Guiseppe is Italian for Joseph). In an interview on TV, Bonavitacola said he had a hard time getting locals to patronize original Italian cuisine but patience and a decision to adapt Italian cooking to local taste paid off. (We just hope he didn’t make his spaghetti and other pasta dishes too sweet.) Guiseppe’s is now the most popular restaurant in town. Their pizzas are baked traditionally in a wood-fired brick oven giving them an excellent quality.

Tacloban, being a seaside city, is also an excellent place for seafood dining. There are several seafood barbecue or inihaw stalls in town, especially those along the seaside. Also check out the barbecue stalls along Rizal Avenue and the Ocho Seafood Grill downtown. We still remember the excellent baked scallops we had way back in the mid-1990s during our first two visits to this city. In a recent trip Leo got to taste winaray na kinilaw – the Waray version of kinilaw or ceviche. The Waray version of this raw fish dish marinated in vinegar or lime juice has coconut milk added and Leo says it’s the best version of ceviche he has ever tried.

“Pasalubongs” may be bought at shops along P. Zamora St. downtown. Among the more popular ones are delicacies unique to the region – binagoland moron. Binagol is taro or cassava cake pudding made with nuts whilemoron is suman (glutinous rice cake wrapped in palm leaves) made with chocolate paste and nuts. 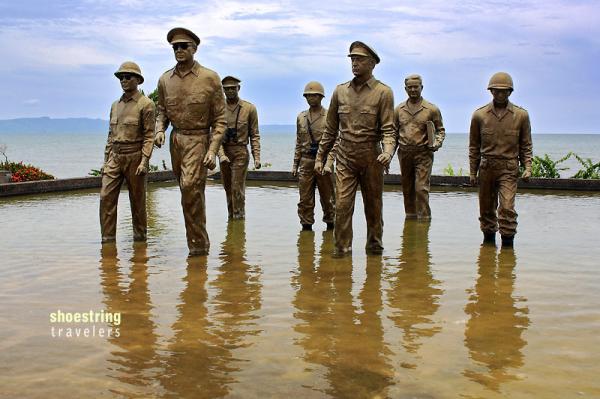 Probably the most famous landmark associated with Tacloban is the Leyte Landing Memorial commemorating Gen. Douglas MacArthur and the US Army’s landing on October 20, 1944. This landmark however is not in Tacloban City itself but in Palo, a town next to Tacloban and formerly the capital of Leyte province. The centerpiece of the park is a manmade pool with the bronze figures of Gen. MacArthur and his staff along with then Philippine president Sergio Osmena Jr. and Carlos Romulo. Beside the park is the MacArthur Beach Resort. Families can often be observed having picnic by the beach and swimming in its waters especially on weekends. 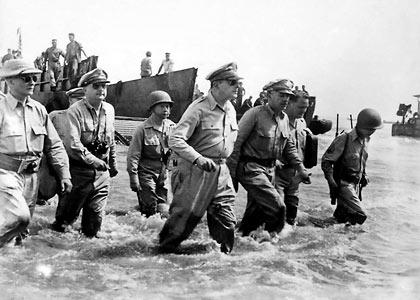 A 1944 picture of the Leyte landing. Pres. Sergio Osmena, Jr. at right,
Gen. MacArthur in the center and Carlos Romulo behind and to
MacArthur’s left. Photo courtesy of Wikemedia Commons.

A piece of trivia: The beach where the memorial is located and the spot where MacArthur waded inland with his staff is named Red Beach. It has been written elsewhere – erroneously – that the beach got its name from the blood of soldiers that stained the beach during the fighting there. The name Red Beach was actually a code name the Americans used to designate the different landing zones. White and Yellow were the names used for the other beach zones during the 1944 landings. We can’t help but think, however, that soldiers would have been a bit more apprehensive landing on a beach named Red than on a beach named White or Yellow. 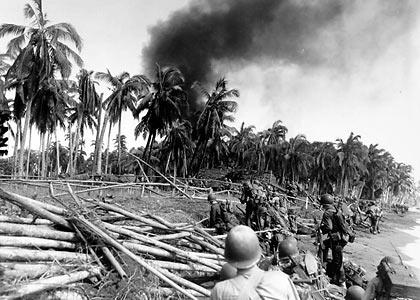 Clearing the way: American troops of the 7th Cavalry on an assault landing
in San Jose, Leyte. Photo courtesy of Wikemedia Commons.

Leo’s latest visit to Tacloban took him to a summit/meeting in nearby Babatngon. This was held in FMC Farms, owned by Dr. Junji Camenforte. An excellent host, Dr. Junji took us around Babatngon, Tacloban and the attractions in those areas. His farm itself has several interesting features including ostriches raised for their meat and eggs, imported varieties of goats much larger than local ones and sheep. Dr. Junji mentioned that one ostrich egg was good enough to feed 4-5 people. 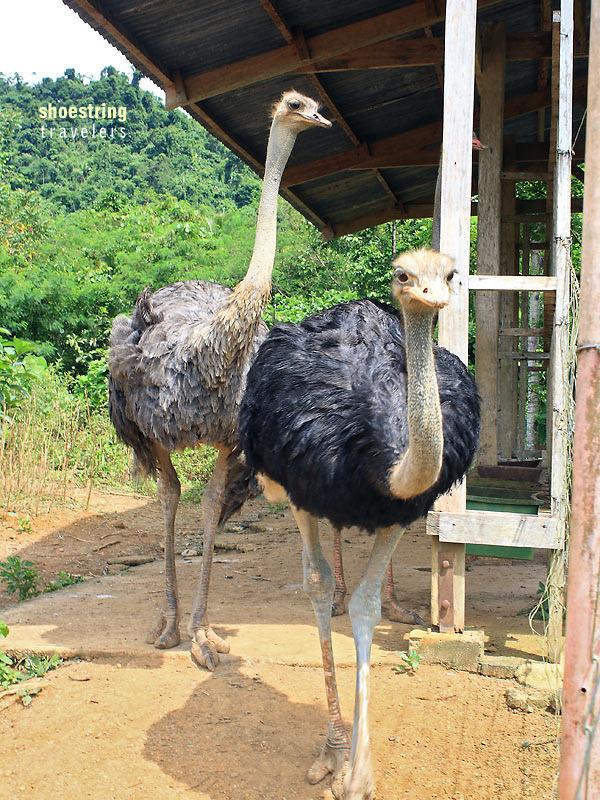 Dr. Junji also drove Leo and his friends to Rafael’s Farm in Brgy. Pagsulhugon, Babatngon. This 16-hectare attraction has been converted into a resort and dining place and is popular among the locals as a setting for outdoor weddings. A big pond, beautiful gardens, native-style huts and beautifully decorated pathways all laid out in a lush, green setting gives this place an aura of serenity. A native-inspired restaurant in the middle of the farm provides excellent refreshments. 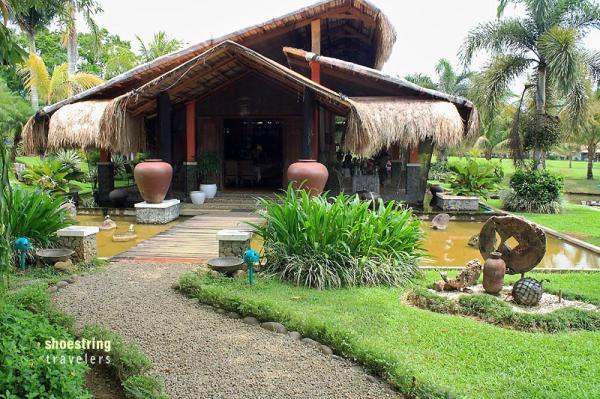 The restaurant at Rafael’s Farm is set amidst a lush green setting. Rest and fill up: a swing seat at one of Rafael Farm’s pergolas and the interior of the restaurant. As mentioned earlier, Tacloban is a gateway to many other travel destinations in the region. Its airport services several flights to and from Manila and Cebu daily. One of the nearer tourist destinations is the beautiful island province of Biliran, accessible by public utility van 2-2.5 hours away. The beach and surfing destination of Guiuan, Eastern Samar is also accessible by van from any of the terminals in Tacloban and is likewise about 2-2.5 hours away. (Although islands, Biliran and Guiuan are connected to the main islands of Samar and Leyte by bridges or viaducts.) If both places still seem too far away for the traveler there’s the Marabut Rock Park and the Sohoton Natural Bridge National Park, both in Eastern Samar. Both locations are one hour or less from Tacloban across the San Juanico Bridge.

Other destinations a bit farther away but still accessible from Tacloban are Palompon, Leyte and its marvelous Kalanggaman Island, Inopacan/Hindang and the Quatro Islas (4 Islands) and the beaches and islands of San Isidro, Allen, Lavezares and Biri in Northern Samar. There’s a lot more besides that can be mentioned here but that depends on how adventurous you are willing to get. Both Leyte and Samar contain numerous, largely undeveloped tourist spots including white sand beaches and islands, waterfalls, lush forests and hidden caves that await the intrepid traveler passing through the travel hub that is Tacloban.