Do you know where the official residence and principal workplace of our Vice President is? It is a palace made up of coconut shells and coconut lumber known as Imelda Madera. 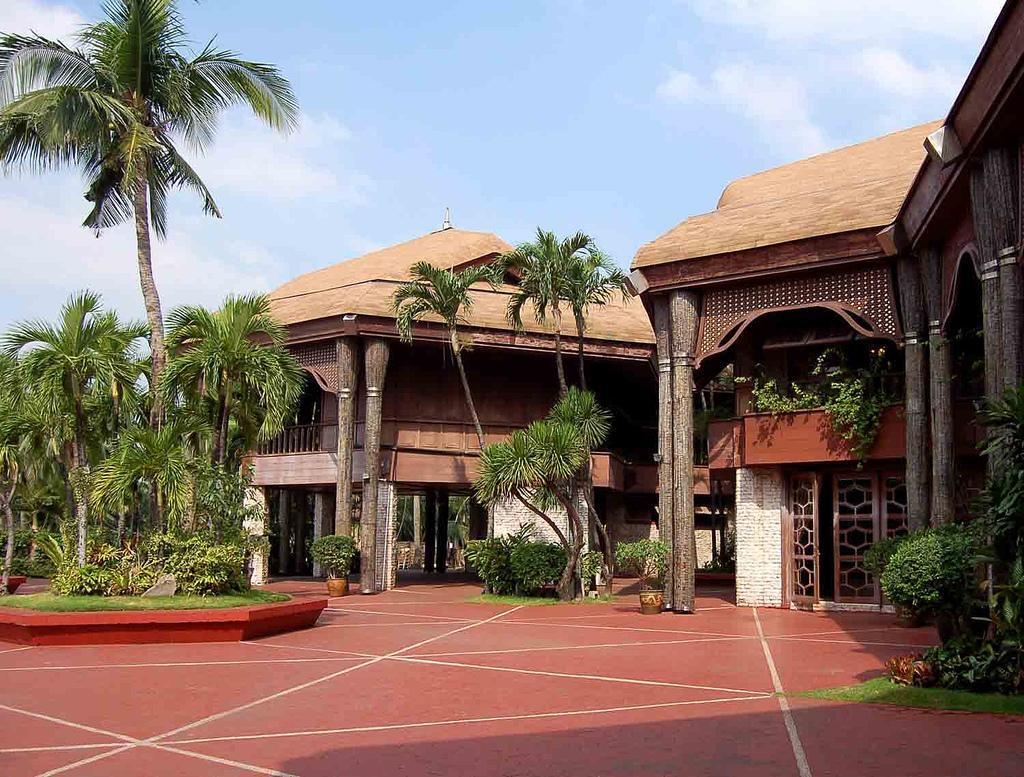 Do you know where the official residence and principal workplace of our Vice President is? It is a palace made up of coconut shells and coconut lumber known as Imelda Madera.

Also known as Tahanang Pilipino, Coconut Palace is the home of the Vice President of the Philippines. Located at the CCP Complex, in Pasay, south of the centre of Manila, it was commissioned by former First Lady Imelda Marcos for Pope John Paul II's visit in 1981. However, the Palace's architect Francisco Mañosa, later claimed that the Coconut Palace was planned long before the Pope even decided to visit the country.

Before becoming the official residence of the Vice President, the palace was best known for wedding receptions.

The Palace is a showpiece on the versatility of the coconut and its viability as an export. Built in 1978, it is made of several types of Philippine hardwood, coconut shells, and a specially engineered coconut lumber apparently known as Imelda Madera. Each of the suites on the second floor is named after a specific region of the Philippines and displays some of the handicrafts these regions produce.

A Palace in a Coconut

The palace is shaped like an octagon (the shape given to a coconut before being served), while the roof is shaped like a traditional Filipino salakot or hat. Some of its highlights are the 101 coconut-shell chandelier, and the dining table made of 40,000 tiny pieces of inlaid coconut shells. Highlighted as one of the Cultural Center of the Philippines’ most striking structures for its architecture and interiors, the palace celebrates the coconut as the ultimate “Tree of Life”. From the coconut's roots to its trunk, bark, fruit, flower and shell, the palace's design, form and ornamentation echo these elements.

•   The Coconut Palace has been a guesthouse for many visitors, including Libyan leader Muammar al-Gaddafi, Brooke Shields and George Hamilton.
•    The Coconut Palace has found itself being featured in various TV shows. On the fifth season of the reality series The Amazing Race, the Coconut Palace served as the pit stop when the competing teams went to Manila. The contestants were welcomed by Luli Arroyo, daughter of Former Philippine president Gloria Macapagal-Arroyo.
•  The Palace was made a primary filming location for the ABS-CBN teleserye Tanging Yaman, standing in for Malacañang Palace as the residence of the First Family.

The palace has seven guest rooms named after different provinces all over the country.

A Glimpse to Coconut Palace

The palace is located on F. Ma. Guerrero Street at the Cultural Center of the Philippines Complex between the Folk Arts Theatre and the Sofitel Philippine Plaza.

The Light Rail Transit (LRT-1) is the fastest and cheapest way to get from Manila to Pasay. From its station in Monumento, the LRT traverses the Rizal Avenue Ext. in Caloocan going to the City of Manila all the way up to Pasay City.
Public transportation within the city, like in most of the urban areas in the Philippines, is facilitated mostly using inexpensive jeepneys and buses. Tricycles (motorbikes with an attached two seater carriage) are the usual transportation used for short distances, while Taxi cabs are used by the upper middle class. The roads are organized around a set of long narrow and circumferential roads that radiate and circle in and around the city.