Plaza Miranda is a public square bounded by Quezon Boulevard, R. Hidalgo Street and Evangelista Street in Quiapo, Manila. It is the plaza which fronts the Minor Basilica of the Black Nazarene (Quiapo Church), one of the main churches in the City of Manila, and is considered as the center of Quiapo as a whole. Inaugurated in its current form by Mayor Arsenio Lacson in 1961, it is named after José Sandino y Miranda, who served as the Philippines' Secretary of the Treasury between 1833 and 1854. 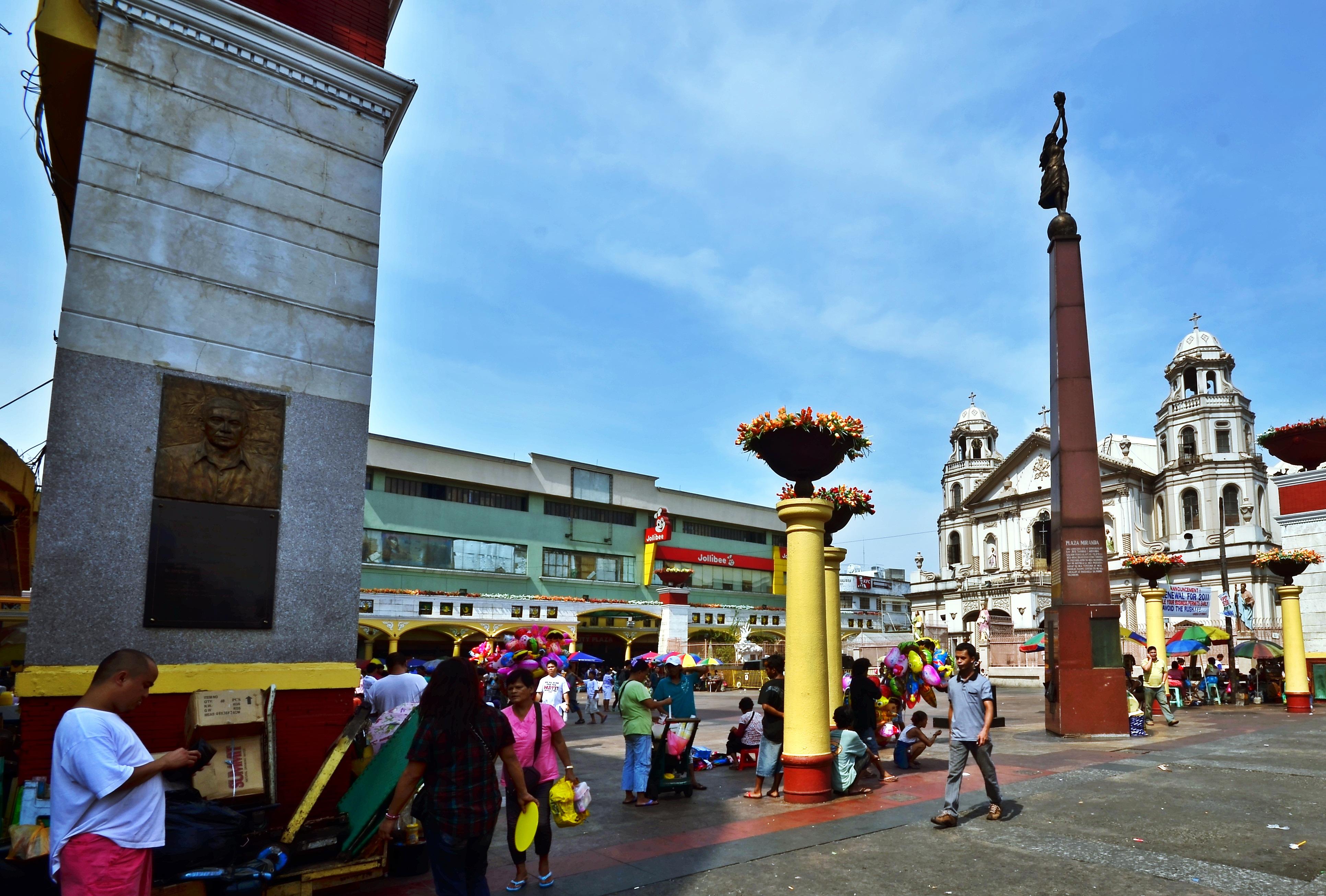 Considered the center of Quiapo, Plaza Miranda is surrounded by several shopping buildings and its most famous landmark, Quiapo Church.

Plaza Miranda is a public square bounded by Quezon Boulevard, R. Hidalgo Street and Evangelista Street in Quiapo, Manila. It is the plaza which fronts the Minor Basilica of the Black Nazarene (Quiapo Church), one of the main churches in the City of Manila, and is considered as the center of Quiapo as a whole. Inaugurated in its current form by Mayor Arsenio Lacson in 1961, it is named after José Sandino y Miranda, who served as the Philippines' Secretary of the Treasury between 1833 and 1854. 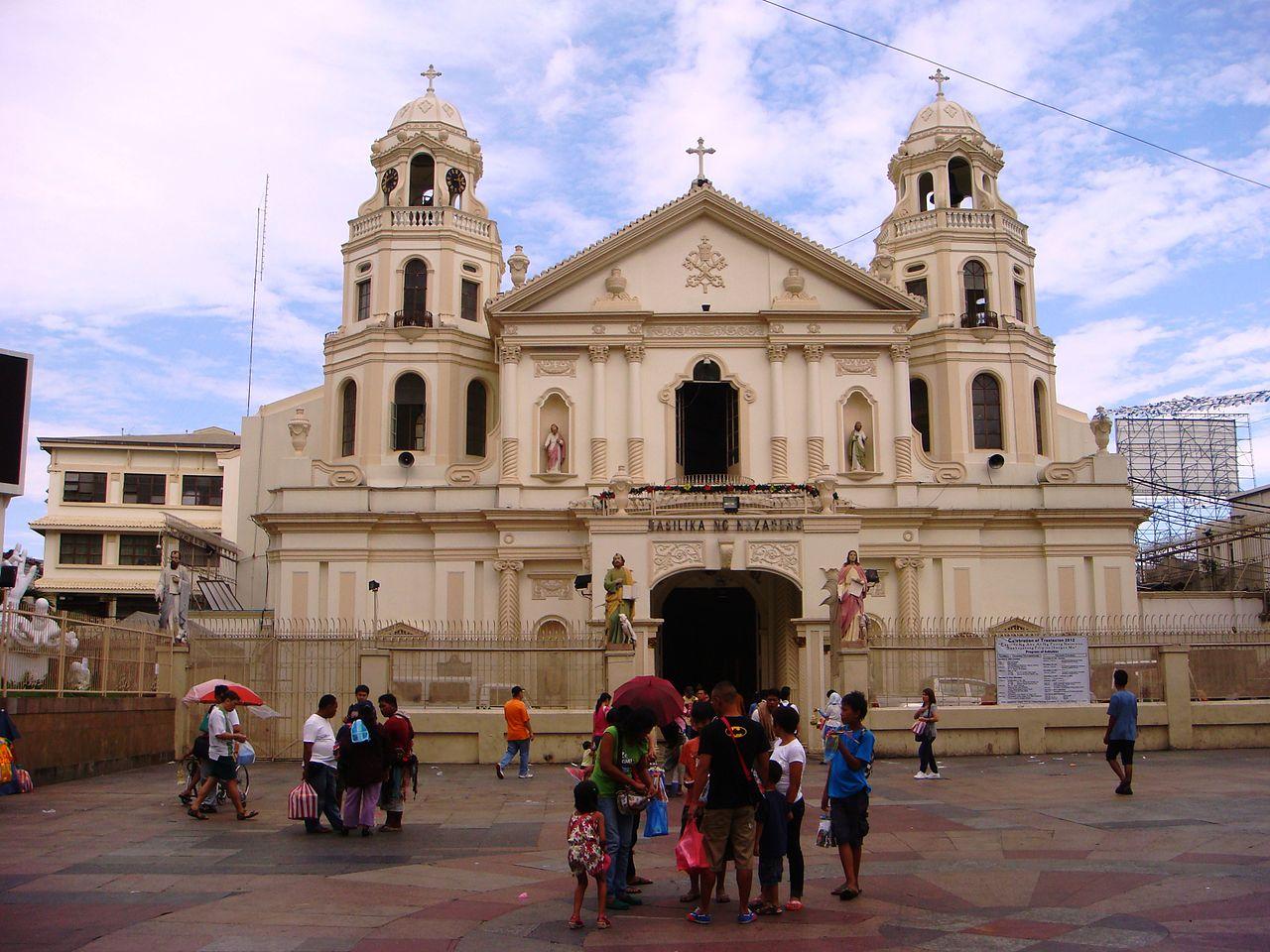 Regarded as the center of Philippine political discourse prior to the imposition of martial law in 1972, the plaza was the site of the 1971 Plaza Miranda bombing, where two grenades were launched at a political rally of the Liberal Party, killing nine people. It underwent a 49-million-peso renovation in 2000 after decades of neglect as a result of Manila's urban decay in the 1970s and 1980s, giving it a more modern design despite protests from various historical groups and cultural experts, with a monument erected to commemorate bombing victims and additional architectural elements installed. Currently, Plaza Miranda serves as a "freedom park" where assemblies and protests may be held without needing a permit from local authorities, and with thousands of people crossing through it every day, it is considered to be Manila's version of Times Square.

Despite fronting Quiapo Church, Plaza Miranda and the streets surrounding it is known as a center for fortune-telling and the sale of lucky charms and amulets. Most fortune tellers who practice around the Plaza Miranda claim that they are able to draw their ability to tell fortunes from their devotion to the Black Nazarene (the patron of the Quiapo Church) despite Catholic Church doctrine deploring the practice.

Plaza Miranda has an area of 2,954 square meters (31,800 sq ft), bounded by the Quiapo Church to the north, Quezon Boulevard to the east, R. Hidalgo Street to the south and Evangelista Street to the west. The plaza proper is paved with granite tiles and is surrounded by Neo-Gothic architectural details which are inspired by Quiapo Church's architecture, particularly on the western side, which contains two grand entrance arches bearing the coat of arms of Manila. The two grand arches are separated by several smaller arches which form a covered colonnade, incorporating into their design the sea lion found in the coat of arms. A larger, more elaborate grand arch was also constructed on the plaza's south side, at the intersection of R. Hidalgo and Villalobos Streets. 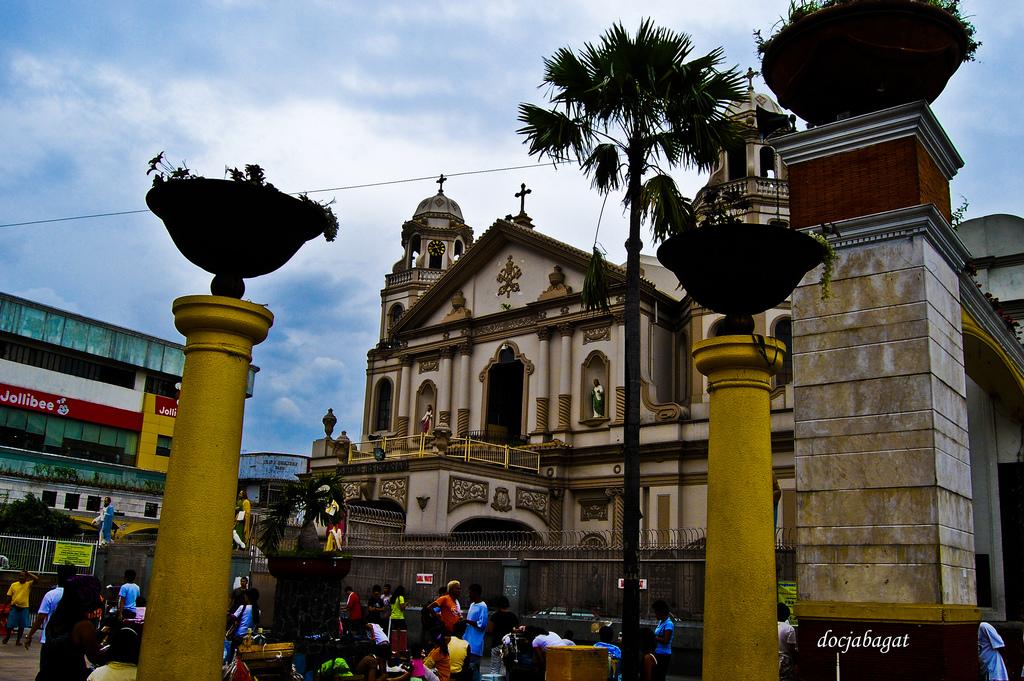 Two of the plaza's four corners contain historical markers. A plaque commemorating the Plaza Miranda bombing in 1971 is installed at the southwest corner, unveiled by President Gloria Macapagal-Arroyo on August 21, 2002, while the southeast corner, fronting Quezon Boulevard, has a 35-foot (11 m) high marble obelisk topped by a statue of a woman whose outstretched arms bear a torch, representing freedom. The obelisk is flanked by two columns on each side which are topped with urns made from an alloy of cast iron and bronze, which also serve as gas-fired cauldrons which may be lit for special occasions.

The Manila city government declared this particular corner the "Plaridel Corner", after the nom-de-plume of Marcelo H. del Pilar, editor and co-publisher of La Solidaridad, on August 30, 2005, the centenary of del Pilar's death, and the commemorative plaque, written in Filipino, bears the following quotation attributed to Voltaire.

(I disapprove of what you say, but I will defend to the death your right to say it.)”

The plaza is lit at night through the use of several floodlights installed at strategic points throughout the area, both on the ground and on top of the colonnade. This and a sound system are controlled electronically from a control room located within the Lacson Underpass, located to the southeast.

Aside from the Quiapo Church, several other notable buildings are located within the vicinity of Plaza Miranda. The most notable buildings within the plaza's vicinity are the F&C Tower (formerly the Picache Building), which formerly housed the headquarters of Philippine Savings Bank, and the Times Theater, one of Manila's oldest cinemas. Prior to the 1970s, a building which stood opposite the present-day Plaridel Corner featured an electronic news ticker operated by The Manila Times; the building has since been demolished and in its place was built the Plaza Miranda branch of Mercury Drug, whose façade features two large LED displays. The area around R. Hidalgo Street is also known as the "photographers' haven", owing to the presence of several buildings which house shops offering photography-related services, some of which have been in operation for decades.

Three of the seven entrances to the Lacson Underpass are located within the vicinity of Plaza Miranda: the Carriedo entrance is at the plaza's northwest corner, while the Villalobos entrance is located across from the Plaridel Corner, in front of the Mercury Drug Plaza Miranda. The Paterno entrance meanwhile is located at the northeast corner, beside the Quiapo Church.

Here is the list of hotels that can be found in Manila that offer good service and accommodation.

Manila is the capital of the Philippines. Tourists can go around Manila through many options. Buses, FXs, jeepneys, taxis, tricycles, and pedicabs are available as modes of transportation in the city. The city is also serviced by the Manila Light Rail Transit System, popularly known as LRT, as distinct from the MRT in other parts of Metro Manila.

Calesas are still used in the streets of Binondo and Intramuros, but mostly for tourists.