The Tale of Puente del Diablo

Some call it Punta del Diablo. Yet, since Punta is "point or up" in Spanish and the legend tells of a "bridge", the proper terms seem to be the Spanish Puente. Puente del Diablo in Binangonan, Rizal, is actually a peninsular hill about 20 meters high extending out some 100 meters into the waters of Laguna de Bay. During summer when it has no vegetation growing from its many crags and cracks, its huge, somewhat rectangular rocks give it the appearance of a ruined massive stone bridge. 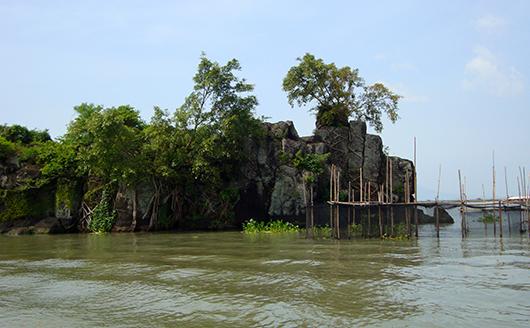 Some call it Punta del Diablo. Yet, since Punta is "point or up" in Spanish and the legend tells of a "bridge", the proper terms seem to be the Spanish Puente.

Puente del Diablo in Binangonan, Rizal, is actually a peninsular hill about 20 meters high extending out some 100 meters into the waters of Laguna de Bay. During summer when it has no vegetation growing from its many crags and cracks, its huge, somewhat rectangular rocks give it the appearance of a ruined massive stone bridge.

The story goes that in the early part of the Spanish period, there lived in a sitio of barrio Pilapila (about 2 kilometers southeast of the poblacion or town proper of Binangonan) a beautiful maiden whose hand was sought in marriage by many suitors. The low hill on which their bahay-kubo or nipa hut stood is today still called Pulo though now connected to the mainland, suggesting that the place was once a small island.

The girl was a pious woman who went to church on the poblacion as there was yet no chapel in the nearby barrio of Pilapila at that time.

Among the girl's suitors was said to be a handsome European who in all appearances was a nobleman.  He sported a thin mustache, and dressed in a black suit complete with cane and top hat. And while the other suitors had simply tired out in pursuing their quest of winning the girl's affections, this foreigner kept up his courtship in earnest.

But it seemed the girl was determined to stay out of any romantic relationship, being devoted to religious and social work. She devised innumerable excuses to stave many suitors. Then, perhaps in keeping with the ancient courtship custom where a girl does not flatly say "no" to a man but instead demands the accomplishment of difficult tasks, she confronted the European with a really impossible proposition. She asked him to construct a stone-bridge from their place to the opposite bank to Laguna de Bay, a distance of about 15 kilometers across the lake. And the bridge must be completed overnight. With that, the girl hoped to put to an end his persistent courtship.

But alas, the man took up the challenge. And that very evening as dusk fell, the grating sounds of rocks, big stones and boulders being carved and moved could be heard in the place. People from nearby Pilapila could only wonder what commotion was all about. But the girl and her father and mother knew. As they were the only inhabitants of the Pulo, only they could see through the enveloping darkness that the foot of the stone-bridge was already being constructed.

"He must surely be a very wealthy man," said the girl's father. "Imagine being able to hire all those men to work on such a long bridge. There must be a hundred of them out there."

"They will not be able to finish that bridge till morning", the girl answered, trying to reassure herself.

The work went on into the night, and into the early morning hours. And the noise grew fainter and fainter as the bridge got longer into the lake. The girl could not sleep, worried that the bridge would be finished on time, that she would be compelled to marry the Euopean. Curious, she decided to have a look at the work being done.

She thus went down the hill and behold - in the silvery light of the rising moon, she saw that the workers were not human beings: they had wings like bats, tails like lions, and horns like goats! They were demons! Hundreds of them, her European suitor, still in his white frilled shirt, was one of them - a devil! To the girl, he looked like Satan himself - with claws for hands and hoofs for feet, and with eyes burning like red-hot coals.

Trembling with her fear, the girl was momentarily stunned. But after a short while, she ran away from the scene, towards the poblacion.

She pounded hard on the door of the convento where the parish priest stayed. Informed of the situation the priest hurriedly led the way inside the church and after saying a short prayer before the altar went straight to the belfry. There, he pulled at the ropes of the great bell whose sound could be heard for miles around. This bell was rung only in cases of emergencies such as fires, pirate and tulisanes attacks, to alert the townspeople, and in such instances as this one now in progress.

The sound of the great bell travelled to Pulo, and the demons scampered away in fright. The European suitor - Satan - twisted and growled in defiance, but nonetheless also flew away. The half-finished bridge disintegrated and collapsed, the big stone slabs making loud splashes on the waters of the lakes as they fell, and sending out huge waves to the shore. By now, people in Pilapila and the poblacion, earlier awakened by the ringing of the huge church bell, had gathered on the Lakeshore, attracted by the thunderous noise made by the rocks as the bridge collapsed.

And in the breaking light of dawn, they saw the ruins of the foot of what could have been El Puente del Diablo (The Bridge of the Devil), and they shivered with fright as they looked at the ripples on the water, emanating from the spot on the lake where the rest of the bridge had sunk.

Puente del Diablo still stands at Pilapila up to this day - a grim reminder to everyone who shudders at the thought of a devil’s design that almost succeeded.