The Vicinity of Nature Church

Nestled inside the city landscape of Las Piñas is the charming nook that is called Nature Church or Parish of Mary Immaculate Church. This quiet spiritual sanctuary is a sprawling area of natural beauty. Inside, the church grounds are full of tall and shady trees. 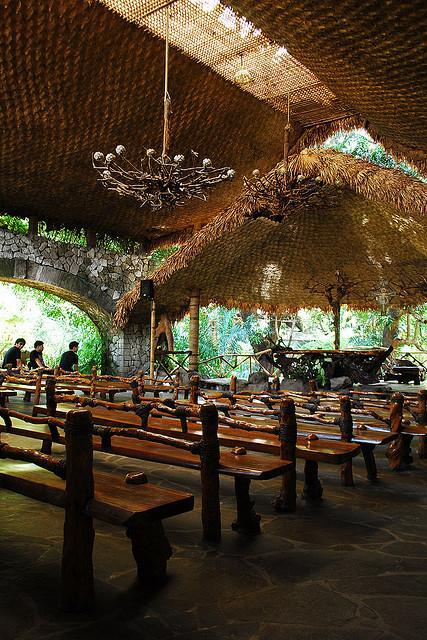 Nestled inside the city landscape of Las Piñas is the charming nook that is called Nature Church or Parish of Mary Immaculate Church. This quiet spiritual sanctuary is a sprawling area of natural beauty. Inside, the church grounds are full of tall and shady trees. In fact, the church is situated in a half-century old mango orchard, and everything is well preserved. None of the trees were cut down during the construction of the church, and most of the materials used in building it were cast-off construction materials.

The church itself is full of all things inspired by nature. This nipa-hut open-air structure has a high ceiling that is made out of wood, anahaw, and other native materials. The ceiling is peppered with hanging dove décors that are actually lighting fixtures made out of Capiz shells, which add to its charm. The church’s altar is made out of driftwood and marble—both natural materials as well. A big statue of Jesus was put in a prominent position near the altar to complete this place of prayer and meditation.

Built in 1986, this airy church can comfortably accommodate about 100 people or so in its tree trunk stumps that serve as seats. It is nice to know that the seats were created from fallen tree stumps and logs, which came from star apple trees. These really give a rustic feel to the place, which is why this particular church is a favorite for quaint weddings among locals.

Beside the main church, near the entrance, is the San Lorenzo de Manila Chapel, which is a smaller version of the main church. The chapel has a lot of wooden furnishings and décor as well. This is just perfect for more intimate church gatherings.

The man behind the amazing architecture of this church is Francisco “Bobby” Mañosa, who was cited in Asia Week Magazine as one of Asia’s visionary architects. He was also the one who designed the Coconut Palace, which actually has a similar style and feel.

Take a bus that goes to Alabang via EDSA. Get off on Zapote road and catch a jeep going down Alabang-Zapote to Las Piñas. Jeepneys ply around with their own respective fixed routes.

Accommodations in the city are also available. There are lots of inns and hotels throughout the town offering comfortable rooms and cottages at a reasonable price.