Tourist Attractions of Pan-ay: The Capital Town of Capiz

Pan-ay is the first capital of the province of Capiz during the early Spanish regime. The infrastructure of the town is still maintained. You can see Spanish colonial marks in the town; some already crumbled apart, some are fading, and some are still standing. 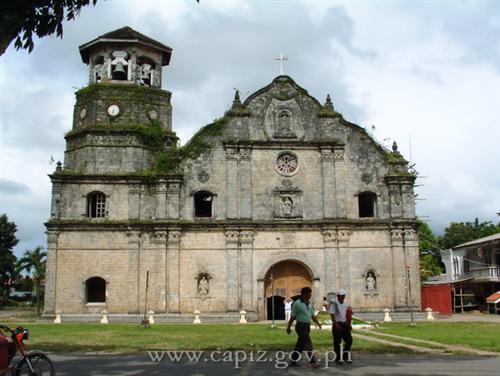 Pan-ay is the first capital of the province of Capiz during the early Spanish regime. The infrastructure of the town is still maintained. You can see Spanish colonial marks in the town; some already crumbled apart, some are fading, and some are still standing.

Santa Monica Parish Church is situated in the town of Pan-ay in the province of Capiz. It is an Augustinian church built in the 18th century, housing the biggest bell in Asia and third biggest bell in the world. Sta. Monica Parish Church is an internationally-renowned parish church, declared as a National Historical Landmark by the National Historical Institute, and a National Cultural Treasure by the National Commission on Culture and the Arts in 2004.

The church retains much of its original floor – Terra cotta tiles, with white marble and black slate as accents. It has three Baroque-styled altars. The retablo of the central altar has been painted over in silver and gold enamel. However, the side altars have hardly been touched and probably represent the original colors of the woodwork – primaries of blue, red, green, and orange, with gold leaf accents. These altars are unique because of the Latin inscriptions carved on roundels set in its reed thin columns. Behind the Gospel side altar are remnants of decorative painting, also done in brilliant primaries.

The Pan-ay Bell or “Dakong Lingganay” (Big Bell in Hilagaynon), is the largest bell in Asia and third largest in the world, with a height of 5 feet and a diameter of 7 feet. It weighs 10,400 kilogram. This bell was made from seventy sacks of coins donated by the townspeople. It carries a meaningful inscription, "Soy la vos de Dios que llevarey ensalzare desde el principio hasta fin de este Pueblo de Panay para que los fieles de Jesus vengan a esta casa de Dios a recibir las gracias celestiales" which means, "I am God's voice which shall echo and praise from one end to the other of the town of Panay, so that the faithful followers of Christ may come to this house of God to receive the heavently graces." This church is a clear testament of the strong Christianism in the town of Pan-ay.

Pan-ay Cemetery is located 350 meters outside the town. It has a simple coral chapel surrounded by a circular wall with wrought iron gates.

Napti Island is gifted with white sand beaches that are perfect replicas of Boracay white sand beaches, a small cave that has stalactites and stalagmites, and abundant shells that are used in making necklaces. The area of this island is about three to four hectares. You can also do some fishing, relax under the shady palms, and savor the view of Roxas City and Pan-ay.

Archdiocesan Museum (Museo de Santa Monica) is located at the Santa Monica Parish Church Convent. It was constructed as a place for religious artifacts to protect them from possible destruction. Going to this place will give you an idea on what happened before and how the architectures looked like. The items and artifacts will teach you about the townspeople's deep-rooted faith to God and the intertwined lives, culture, and religion of the people of Pan-ay.