Caraga is an administrative region of the Philippines on the northeastern portion of the island of Mindanao. It is the newest region in the Philippines and is also called Region XIII. The Caraga Region was created through Republic Act No. 7901 on February 25, 1995. The region is composed of five provinces: Agusan del Norte, Agusan del Sur, Surigao del Norte, Surigao del Sur and Dinagat Islands; six cities: Bayugan, Butuan, Cabadbaran, Surigao, Tandag, Bislig; 67 municipalities and 1,311 barangays. Butuan City is the regional center.

The "Kalagans", called "Caragans" by the Spaniards, occupied the district composed of the two provinces of Surigao, the northern part of Davao Oriental and eastern Misamis Oriental. The two Agusan provinces were later organized under the administrative jurisdiction of Surigao and became the independent Agusan Province in 1914. In 1960, Surigao was divided into Norte and Sur, and in June 1967, Agusan followed suit. While Butuan then was just a town of Agusan, the logging boom in the 1950s drew business to the area. On August 2, 1950, by virtue of Republic Act 523, the city charter of Butuan was approved.

During the early years of the Caraga region, its inhabitants came from mainland Asia, followed by Malayans, Arabs, Chinese, Japanese, Spanish and Americans. Migrants from the Visayan and Luzon provinces later settled in the area. Most of its inhabitants speak Cebuano and reside in the rural areas.

Caraga Region, situated in the northeast section of Mindanao, is between 8 00’ to 10 30’ N. latitude and 125 15’ to 126 30’ E. longitude. It is bounded on the north by the Bohol Sea; on the south by the provinces of Davao, Compostela Valley and Davao Oriental of Region XI; on the west by Bukidnon and Misamis Oriental of Region X; and on the east by the Philippine Sea and the Pacific Ocean.

The region is characterized by mountainous areas, flat and rolling lands. Mountain ranges divide Agusan and Surigao provinces and sub-ranges separate most of the lowlands along the Pacific Coast. The most productive agricultural area of the region lies along the Agusan River Basin. The famous Agusan Marsh sits in the middle of Agusan del Sur. Among the lakes in the region, Lake Mainit is the widest. It traverses eight municipalities: Alegria, Tubod, Mainit and Sison in the Province of Surigao del Norte and Tubay, Santiago, Jabango and Kitcharao in Agusan del Norte.

Surigaonon is a local Philippine language spoken in the provinces of Surigao del Norte and Surigao del Sur and some portion of Agusan del Norte especially in towns near Mainit Lake.

The majority of the inhabitants of the region are of Visayan heritage. The province is home to several minority groups, totaling 675,722 in 1995, representing 34.7% of the region's population. Most numerous were the Manobos with 294,284 or 43.55% of the total population of ethnic minorities. Other cultural groups in the region with significant population were the Kamayo, Higa-onon, Banwaon, Umayamnon, and Mamanwa.

Most members of these cultural groups reside in the province of Agusan del Sur.

Rich in natural resources, the region has large tracts of land available for development. The region is noted for its wood-based economy, its extensive water resources and its rich mineral deposits such as iron, gold, silver, nickel, chromite, manganese and copper. Its leading crops are palay, banana and coconut.

It has excellent tourism potentials because of its unspoiled and beautiful beaches, abundant and fresh seafood, ancient and historical landmarks, hot and cold springs, evergreen forests and balmy weather.

Its long stretch of shoreline promises abundance in production of fisheries and aquatic products. With its large tract of fertile lands, the region has a great capacity in producing varied commercial crops as well as livestock and poultry. Major agricultural products of the region are palay, corn, coconut, gold, banana, rubber, oil palm, calamansi, prawns, milkfish, crabs, seaweeds and mango. Caraga's proximity to Cebu and Manila makes it a favorable shipping point for products to and from these markets. Nasipit Port can serve as a secondary shipping hub to Cagayan de Oro when traffic volume from other points in Mindanao increases. With a roll-on, roll-off (RORO) ferry service now in place, Surigao City serves as a vital transportation link for trucks and buses bound for Luzon.

Lying at the edge of the Philippine archipelago, Siargao is reputed as the surfing capital of the Philippines, and hosts an annual international surfing event. Its waves combine the best features of top-rated waves of Hawaii's fabled "pipeline" and the top-billed waves of Indonesia. The huge and powerful "pacific rollers" have been ranked among the top five breaks in the world, including the "Cloud Nine" which is considered one of the world's top surfing waves. Other excellent breaks, which offer the adventurous surfer top-class exploratory surfing without crowds, are found in the towns of Cantilan, Tandag and Lanuza.

Hop from island to island while you discover the picturesque landscapes and feast on the rich marine delights like the fresh blue marlin, crab, squid, seaweed, giant clams and lobsters. Once in Caraga, you can take your pick of which to visit. The alluring islets and islands of Guyam, Daku, Naked or Pansukian, La Janosa, Pig-ot, Dinagat, Bucas Grande,Britania and the General island in Cantilan have white-sand beaches and are ringed by teeming coral reefs that are ideal for swimming and snorkelling.

The region's tropical treats include a boat ride along the naturally-carved water channels amidst the jade-colored lush of mangrove forest in Barangay Manjagao; a journey to the floating village of Barangay Dayasan, and to Buenavista Cave; and a visit to the tropical island paradise of white sand beach, deep blue crystal water in Sagisi island. The Britania in San Agustin-Surigao del Sur hosts 25 unspoiled islets and islands of sugary-white sand and clusters of limestones hills, much like the fabled hundred islands in pangasinan. After having enough sightseeing, swimming and snorkeling, you can spread your picnic blankets in the sand and eat with gusto amidst the serenade of slashing waves and the whispering winds. But you have to bring your food and drinks since there are no restaurants yet in the islands.

Great trails run all around the Cities of Butuan and Surigao, Surigao del sur, Agusan del Norte and Siargao. There are regular cross-country and downhill competitions done in these areas which are participated by local and international bikers. Caraga has an active and hospitable biking scene. Butuan or Surigao-based bikers regularly tour the rugged terrain of the region and are eager to show their routes to newcomers.

Mt. Mas-ai and Mt. Hilong-Hilong are the best sites for trekking or mountain climbing. The views from the mountains are superb, taking in the full scope of the vast lower Agusan Valley. Close to Mt. Mas-ai lies the picturesque Lake Mainit, which is considered the fourth-largest lake in the country, with a total land area of 147 km². Through the years, the lake has been a known lair for pidjanga, tilapia, kasili, banak, haw-an, gingaw, saguyon and igi. Migratory birds, pagosi and tabokali flowers are its intermittent added attractions. From the coastal areas of Lake Mainit to the hills of Jabonga, Tubay, and Santiago, hikers are offered the opportunity to explore the quiet and interesting life of these places. There are a few established treks in the region, but everywhere else you will be hiking in areas virtually untouched by tourism.

Surigao first became famous for its surf, so kayakers who like big waves enjoy it very much. There are also mangrove swamps in the island where you can paddle both in the main channel and through narrow passages in the mangroves while seeing some wildlife and enjoying the serenity of the place. The first is just behind the Pansukian Tropical Resort while the other one is in del Carmen, where the largest contiguous mangrove forest in the Philippines is located. The "must see" place in Caraga where you can paddle around spectacular limestone formations to a point where you can enter a narrow channel which soon becomes a cave is in Sohoton Cave and Lagoon in Bucas Grande Island, which is more than an hour boat ride from Siargao. Since the sport is new here, only Pansukian Tropical Resort offers kayak tours in several locations around Siargao. Aside from sea kayaking, Masao & Agusan Rivers, Lake Mainit and the Agusan Marshland have tremendous potential for paddling using wooden canoes.

Scuba diving is a new sport in the region, so there are no dive resorts available in the area but the Butuan Divers Club offers dive safari at Bito Wall in Bolobolo-Jabonga, Lipatan Shoal in Karihatag-Malimono, Punta Diwata Reefs and Balete Wall in Vinapor-Carmen, and artificial reefs in Calibunan-Cabadbaran. For adventurous divers, the coasts of Surigao offer interesting dive site while the islands of Sagisi and Corregidor are excellent for snorkelling activities.

The limestone karst bedrock of some areas in Surigao and Agusan provinces (particularly in the towns of San Agustin, Tagbina, Lianga, Rosario, and Bislig) features dozens of caves, but none of these are regular destinations for recreational cavers. Located within the towns of Tagbina and Bislig, Banbow and Tatol caves (which are ranked the 6th and 9th longest caves in the Philippines) have recently been declared by the Japanese cave explorers as the third longest cave in the country. Further expeditions are expected as more cave systems are discovered. Some of the most frequently visited and accessible caves in the region are Buenavista and Silop Caves in Surigao City and Libas Cave in Jabonga-Agusan del Norte. These caves have impressive limestone formations and naturally carved stalagmites, stalactites and columns.

The Agusan Marsh in Agusan del Sur is the biggest marsh in the country and is host to diverse species of birds.

The events and festivals offer an experience in color and character, giving a good view of the rich culture that makes up Caraga's heritage. Whatever time of the year, there will always be an event or festival to experience and enjoy, like Naliyagan of Agusan del Sur,Kahimunan, Balangay, Kaliguan, Lisagan and Bonok-Bonok Maradjao Karadjao festivals. Surfers from around the world converge in Siargao to pit their skills against each other during the annual international surfing competition.

The entire region is connected by roads from and to the major commercial, trading and processing centers of Cagayan de Oro and Davao. Butuan City is being developed as the regional center with modern facilities. There are secondary seaports and airports in the region. It has an increasing number of telecommunication facilities and the presence of the Nasipit International Seaport in Nasipit, Agusan del Norte as the major baseport in the region.

As the overland gateway to Visayas and Luzon, the region is accessible by sea through the baseport of Nasipit in Agusan del Norte and Surigao City, Lipata Ferry Terminal in Surigao city that connects the neighboring province of southern Leyte. Other terminal ports are in Dapa in Siargao, San Jose in Dinagat Islands, Tandag City and Bislig City. Fast craft ferry services ply Surigao-Cebu every day. Private ports can also be found in the different municipalities of the region; however, only three of these 42 ports are operational.

The region is serviced by commercial flights to and from Manila and Cebu through the airports of Butuan, Surigao and Siargao both in Surigao del Norte. The Bislig airport used to service commercial flights before its operations were suspended. There are six other privately owned airports in the region. The ports and airports are supported by the road networks that connect the provinces within and outside the region.

All provincial centers have access to domestic and international telephone facilities, both landlines and cellular phones. Three telephone companies serve the region: BAYANTEL, CRUZTELCO, TETCO and PHILCOM. The three cellular phone companies in the Philippines (Globe, Smart and Sun) have facilities in the region. There are four Internet service providers serving Butuan City and in Surigao City. 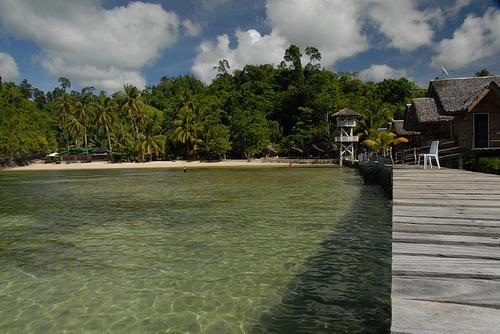