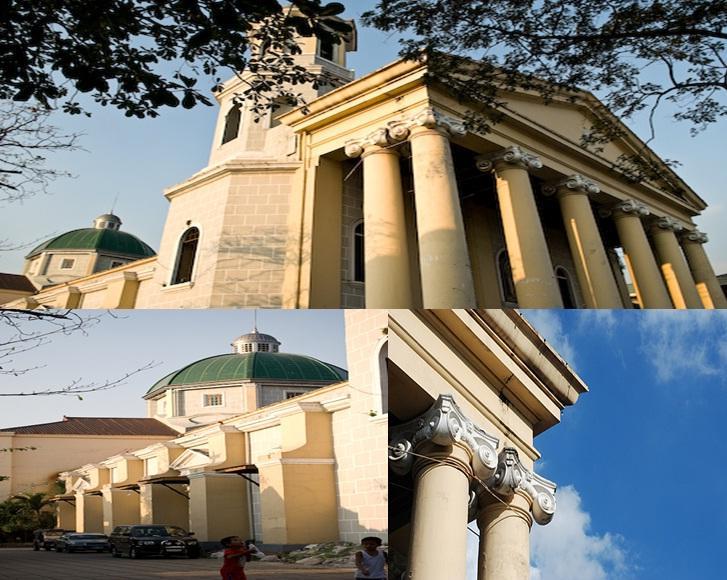 Malabon as it is today is a thriving commercial and industrial urban city, rich in marine resources and a productive fishing industry. It has contributed much to the economy of the region and has also become a manufacturing base as well.  It also has many worthwhile attractions one should definitely visit to get a grasp of the historic yet progressive character of the city.

Started in July 1998, Balsa sa Niugan is owned by Mr. Santy Geronimo, a native from Niugan. It has a total land area of 5,000 sq. meters, in both land and water. Located at the heart of Malabon, Balsa was originally a fishpond converted into a floating restaurant and a fishing garden. Its natural landscape, fishing and open dining facilities make it a pleasurable place for guests to dine.

Generally regarded as the foremost scholar, Epifanio de los Santos, a Malabon native, reaffirms what the Filipino can accomplish with his native genius & ability coupled with proper background & incentive. With the possible exception of Rizal, Epifanio de los Santos went one step further than most of the brilliant minds that preceded him because of his versatility.

A native of Tonsuya, Malabon, Gregorio Gozon Sanciangco is the son of Eladio Sanciangco and Regina Gozon. He started schooling at an early age until he finished his Bachelor’s degree from Colegio de San Juan de Letran and his course in Law at the University of Santo Tomas. In 1878, Gregorio Sanciangco left for Spain to enroll in the Universidad Central de Madrid where he was conferred the title of Doctor of Laws and a Licensure in Administrative Law.

He wrote "EL PROGRESO DE FILIPINAS", a book on economic and political studies of the Philippines. It advocated reforms in the political, administrative, agrarian, revenues, property, natural resources and urban development, taxation and proposed legislation for the implementation of such reforms. Because of this book, he was given tribute by Dr. Jose P. Rizal in the introduction of his work Sobre La Indolencia delos Filipinos.

The gallery is a depository of paintings and sculptures done by the noted members of the Sining Tambobong Foundation. Contemporary and Modern Malabon painters and sculptors are members of this Foundation. Their works are displayed in both national and international art exhibitions.

It is a collection of revolutionary documents and Spanish artifacts. Malabon's contributions to the nation’s history for independence are reflected from the display of various revolutionary materials used by the revolutionary soldiers of Malabon.

Visit Malabon and experience the traditional native fish trading called "BULUNGAN". Bulungan is a bidding practice that started during the Spanish era at the fishing market along the Malabon - Navotas River and is still being done up to this day at the Tanong Fish Market. This kind of fish trading culture is preserved and handed down from one generation to another. It is unique and distinctively Malabon because it does not follow the normal process of bidding. Instead, the spirit of bidding to know the highest bidder is not documented but rather done secretly through silent whispering of bidders' pricing. In essence, this practice is to sell fish to retailers in Metro Manila and other provinces. Fish traders come from the fish ports of Navotas and nearby provinces particularly Bulacan. Usual active time of Bulungan is from 9:00 PM to 1:00 AM.

It is a known fact that the history of the Philippines is relevant to the growth of Christianity. Without exemption, this was the experience of the historical path of San Bartolome Church. Tambobong, the original name of Malabon was founded as a visita of Tondo on May 21, 1599 and continued as such until 1611. The term visita refers to a town or barrio not erected yet as an independent town or parish.  In 1614, it was made as an independent parish and on the 17th of May 1614, Fr. Luis Gutierrez, OSA, became the first parish priest. From 1614 up to 2003 a total of 101 priests served the church.

This park is dedicated to give life and meaning to the city's desire to establish the real foundation for a lasting world peace through the furtherance of better understanding and friendly relations with our neighboring countries. It was constructed with the hope of further strengthening the friendship ties between the people of Malabon City, Philippines and the people of Chung-Gu District, Taejon City, Korea.

A well kept and unique conservatory of both endemic and exotic animals, including a large variety of unusual fishes stashed inside a one-hectare tropical rainforest environment. An amusing destination for the old and the young, it indulges its visitors with the distinct privilege to pet wild animals that normally avoid human contact. The zoo is likewise an accommodating classroom for nature lovers because it educates people on environmental preservation of forests and wildlife.

You can tour Malabon by bus, taxicabs, shuttle, Jeepney, MRT, LRT or tricycles. There are numerous modes of transportation available in the city. It will give you a one-of-a-kind experience that makes your trip memorable. Moreover, the cost in getting around the metropolis is affordable.