The City of Tagaytay is a component city of the province of Cavite. It is one of the country's most popular tourist destinations because of its outstanding scenery and cool climate provided by its high altitude. 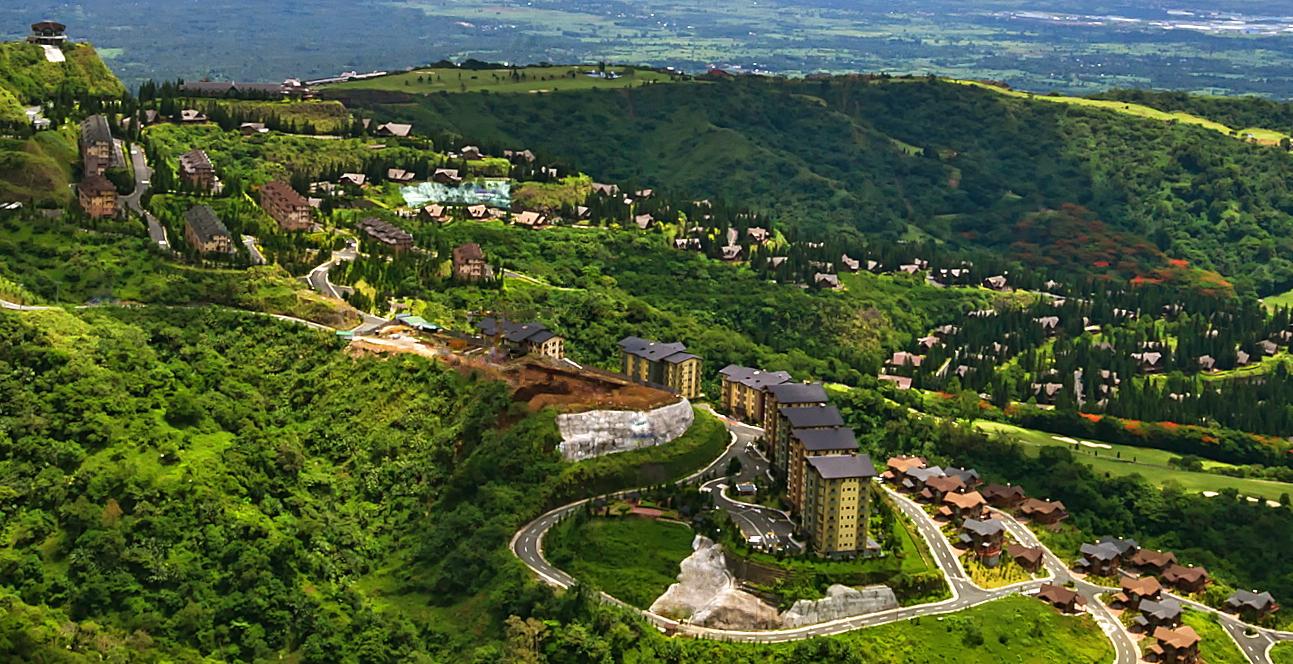 View of the Tagaytay Highlands

The City of Tagaytay is a component city of the province of Cavite. It is one of the country's most popular tourist destinations because of its outstanding scenery and cool climate provided by its high altitude. Tagaytay overlooks Taal Lake in Batangas and provides one of the iconic views of the Philippines, the view of Taal Volcano Island in the middle of the lake, which can be viewed from several vantage points in the city. 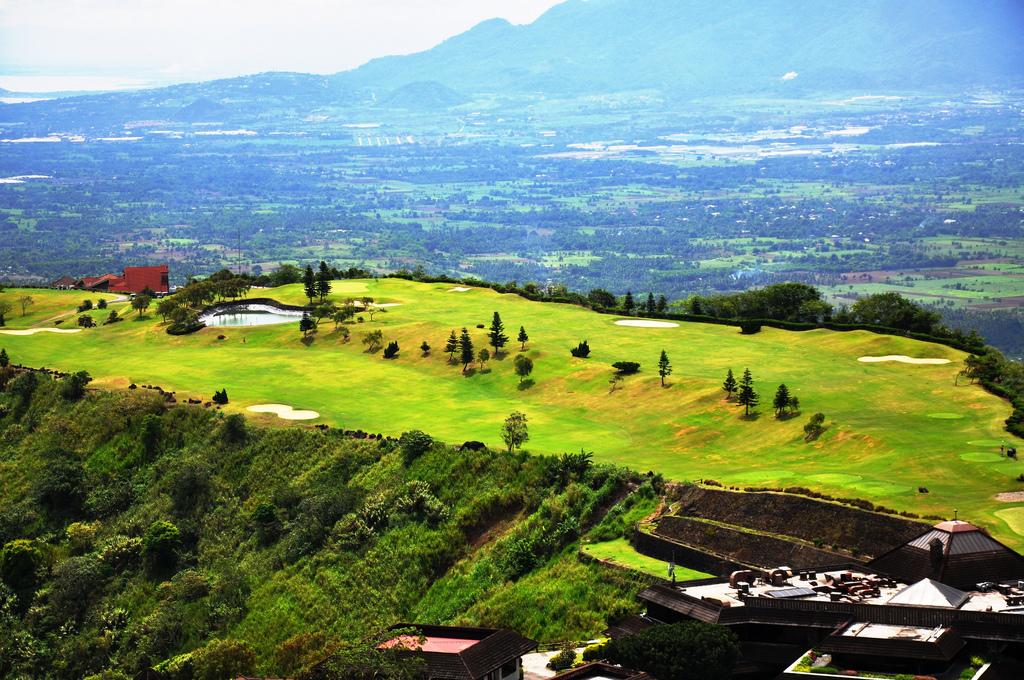 Tagaytay is relatively close to the capital city of Manila, only 55 km (34 mi) away via Aguinaldo Highway, providing an easy escape for the locals from the heat of the big city.

Tagaytay City is a favorite tourist attraction among local and foreign visitors seeking respite from the humid weather in the lowlands, with several tourist establishments providing food and accommodations, some with scenic views of the Taal Lake and Volcano. This view supports Tagaytay's main industry, which is tourism. 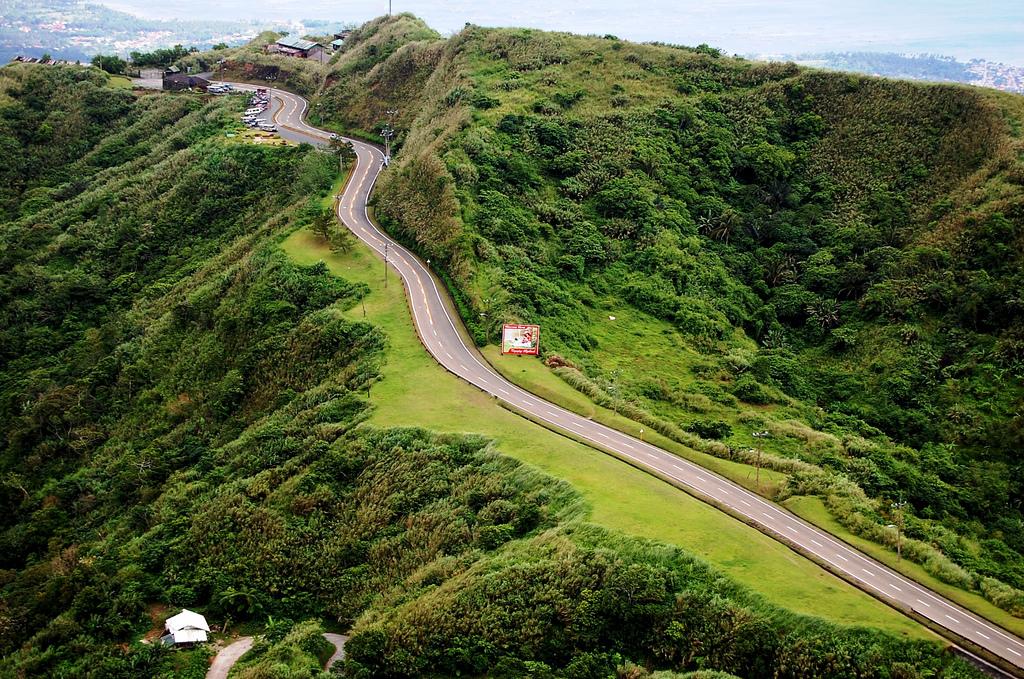 On February 3, 1945, the 11th Airborne Division of Lt. Gen. Robert L. Eichelberger’s 8th Army airdropped military supplies and personnel together with the Philippine Commonwealth troops on the Tagaytay Ridge amidst enemy ground fire. Their mission was to secure Tagaytay City and guarantee the easy flow of troops and supplies to Manila, an action later proved as significant to the liberation of Manila. A marker was erected at the Silang Crossing to honor the event.

Tagaytay played a significant role in Philippine history. During World War II, Filipino soldiers and military officers found refuge on its vast forests and ridges. It was used as landing site and sanctuary for the Filipino USAFFE soldiers and paratroopers on their way to liberate Manila on February 3 to March 3, 1945. The 41st USAFFE marker is a place where one can know more about Tagaytay’s rich political history. It is located adjacent to the Metro Tagaytay College of Business and Arts in Brgy. Kaybagal South.

Divine Word Seminary, one of the biggest schools of theology in the Philippines in terms of population and land area, is also one of the oldest religious institutions in the city. It is run by the Divine Word Missionaries, also known as SVD.

This 1,200-square-meter (13,000 sq ft) garden was constructed to inculcate the value of freedom, peace, and international unity in the hearts and minds of the people. It is located in front of the Development Academy of the Philippines Conference Center in Brgy. Sungay East.

This new travel spot in the Sky City is a strip of fancy restaurants and bars. Being the nightlife hub of Tagaytay, it offers varied cuisine and entertainment for tourists. Some of the noted establishments around are Dencio's Grill, Pancake House, Starbucks Coffee, Yellow Cab, RSM, Leslie's, Max's Restaurant, Cliffhouse, Antonio's Grill, and Henlin.

A blend of natural and man-made attractions is poised on the highest point of Tagaytay City and the province of Cavite. It stands on a 4,516 square meters (48,610 sq ft) of solid ground and overlooks four bodies of water – Taal Lake, Balayan Bay, Laguna de Bay, and Manila Bay – and nearby mountains. It is located at Dapdap West and Dapdap East, approximately 8 km (5.0 mi) east of the Tagaytay City Circle. The construction of a weather station violated Proclamation no. 740 (s-1996) which states to preserve the ecological balance within 1-kilometer (0.62 mi) radius area around People's Park in the Sky.

Behind the bars and glass of the Adoration Convent of Divine Mercy are those who answered the call to live in silence and celibacy. Located at the Holy Spirit Drive in Barangay Maitin in the city, the convent often called the Pink Sisters Chapel has endless visitors carrying their own list of prayers. Also included in their visit is the chance to see nuns praying with them 24 hours a day, seven days a week, although they can only be seen behind the iron grills of the altar.

The Tagaytay's playground is the popular Picnic Grove, a large park that features huts and tables for picnicking and horseback riding, a restaurant, an eco-trail boardwalk, a zip line and cable cars on the gentle slopes of the Tagaytay Ridge. It is a prime location providing the finest view of the volcano far below. It is located in Barangay Sungay East.

The shrine is a small garden where a grotto of the Virgin Mary stands, surrounded by well maintained shrubbery and flower garden. In front of the grotto is a small grass clearing, which is conducive to quiet reflection. 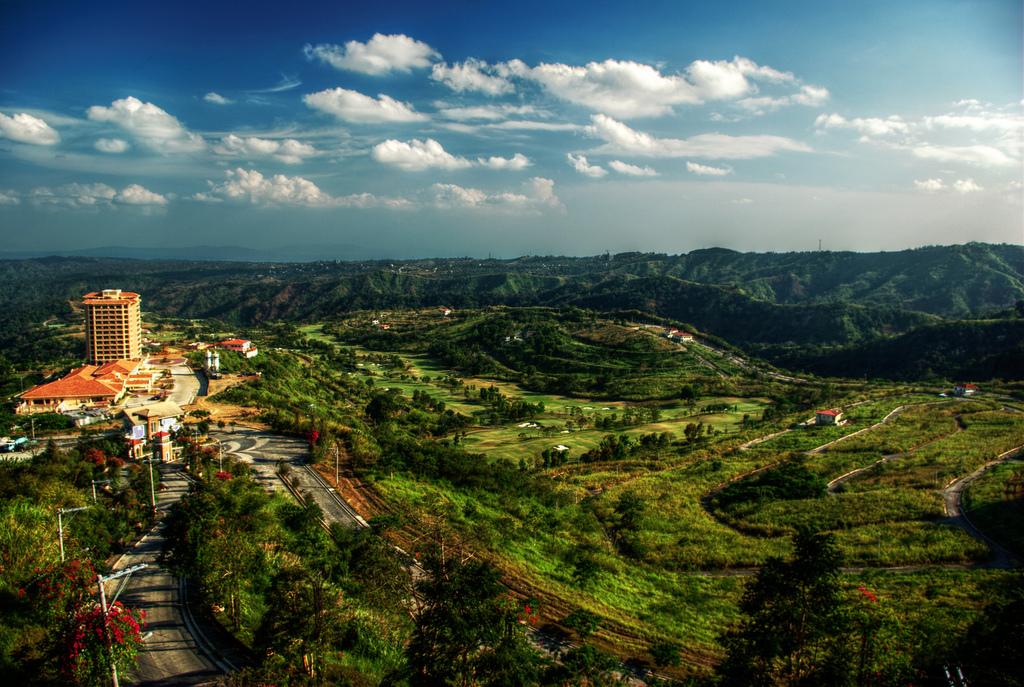 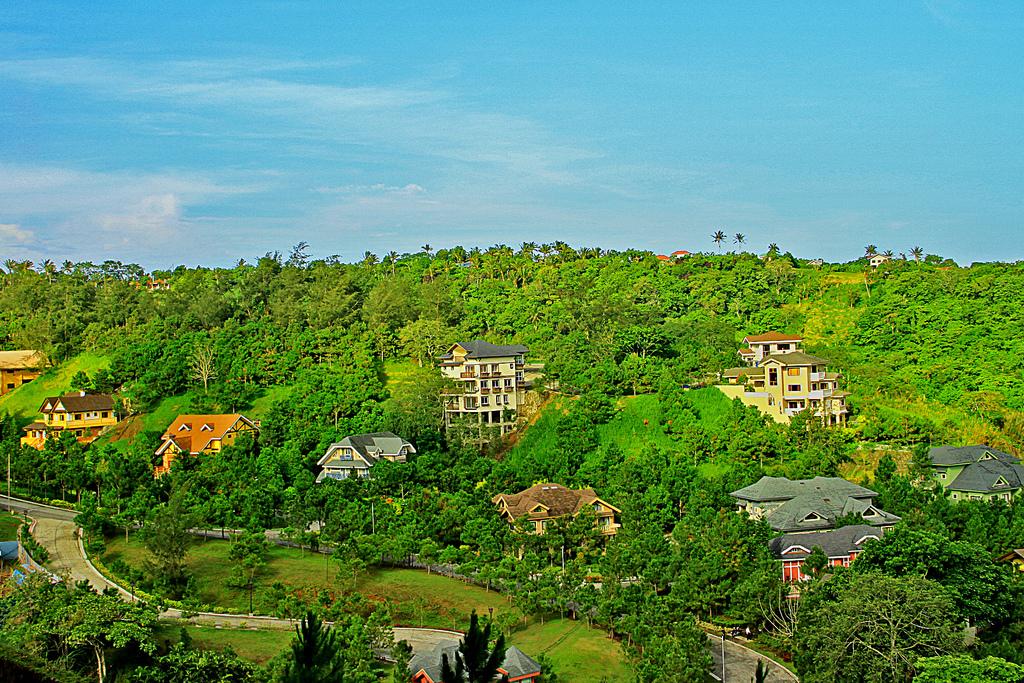 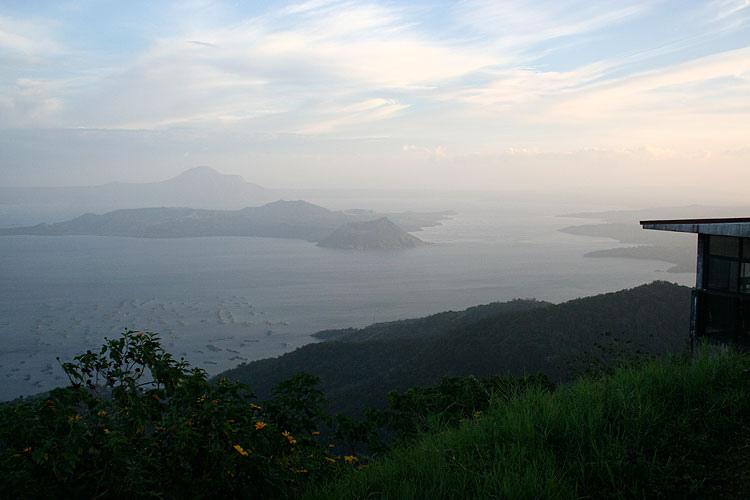 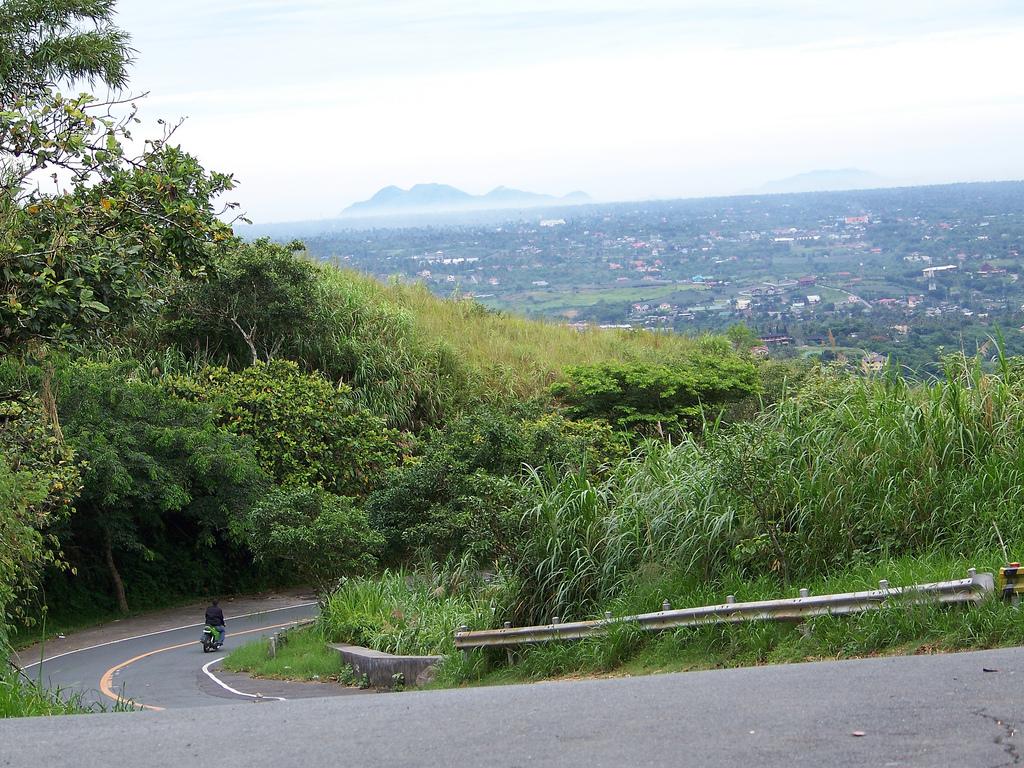 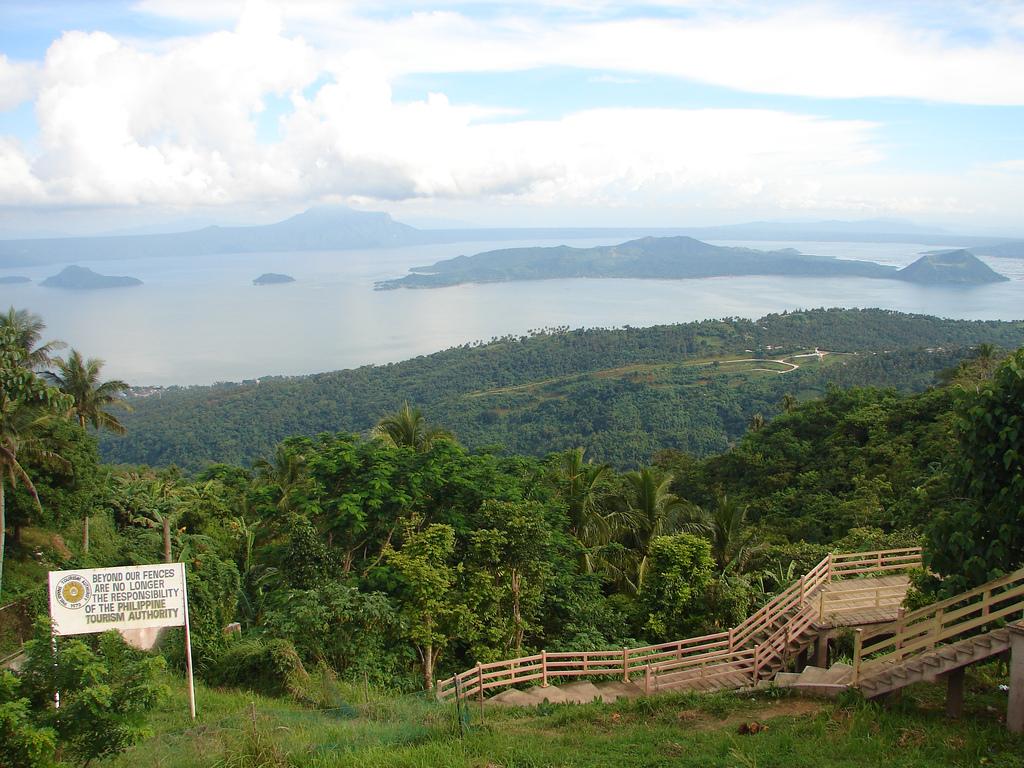 The city is linked by national highways to the Metropolitan Manila Area and to the provinces of Batangas and Laguna. It is also connected by secondary roads to the adjoining municipalities of Amadeo, Mendez, Indang, Silang, and Alfonso in Cavite towards the northwest, to the cities of Calamba and Santa Rosa in Laguna to the northeast, and to the town of Talisay in Batangas to the south.

Tagaytay is about one hour and 15 minutes drive from Manila via the South Luzon Expressway exiting at Santa Rosa, then via Santa Rosa-Tagaytay Road. It can also be reached via the Coastal Road Expressway, then taking the Aguinaldo Highway heading south towards Tagaytay.

By public transportation, there are buses that ply to Tagaytay from Manila on a daily basis. Several bus companies have their terminals in Cubao, EDSA, Pasay City, and at Baclaran, below LRT, Manila.

From Batangas, the best way to reach Tagaytay is to head to Talisay, then go up to Tagaytay via the 12-kilometer (7.5 mi) Tagaytay-Talisay Road, which ends at the Tagaytay City Circle. From Laguna, one may head to Santa Rosa and take the Santa Rosa-Tagaytay Road.