The Legends of the Seven Lakes

The seven lakes are spread out in the city of San Pablo. They are nestled on depressions created by volcanic activity over the centuries. The lakes are ideal for picnics, hiking, freshwater leisure fishing, camping, and other nature-based activities. 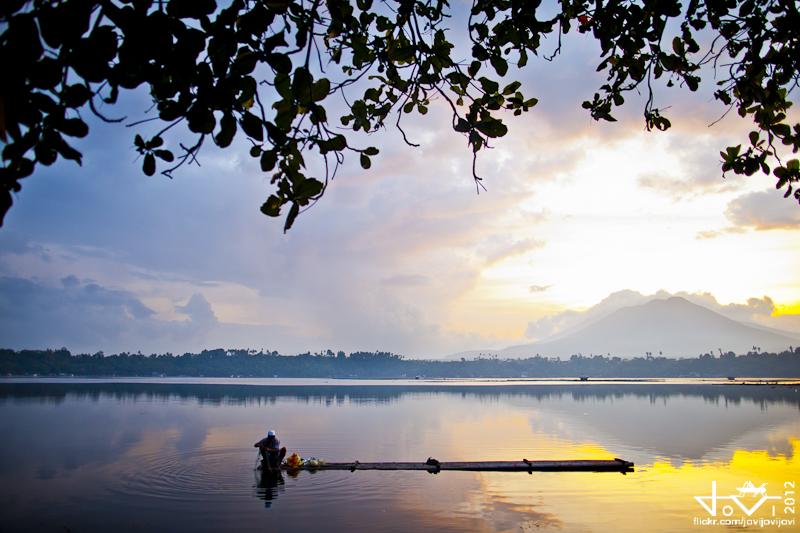 The seven lakes are spread out in the city of San Pablo. They are nestled on depressions created by volcanic activity over the centuries. The lakes are ideal for picnics, hiking, freshwater leisure fishing, camping, and other nature-based activities.

Lake Sampaloc is an inactive volcanic maar. It is the largest of the seven lakes of San Pablo, Laguna. Nearly half of the lake's depth has a shallow depression at the lake's bottom, indicating its volcanic origin. The lake is located behind San Pablo city hall and is dotted with fishpens and small cottages built on stilts.

Legend: Legend tells of a giant tamarind (Sampaloc) tree in the garden of a selfish, stingy old woman who drove away a fairy disguised as an old man asking for some fruit as a cure for his ailing grandson. Instead of helping him, the stingy old woman had him driven away by her ferocious dogs. The old man was badly hurt. After the old man left, there was a thundering noise and peltering rain, followed by the cracking of the earth. And then, the entire orchard sank into a colossal pit which was immediately filled with water. Henceforth, the villagers called it Lake Sampaloc.

Lake Palakpakin is located in Brgy. San Buenaventura, San Pablo City. It has an area of 43 hectares and a maximum depth of 7.5 meters. Residents around the lake rely on income from fishpens and fishcages that grow cultured tilapia and silver carps.

Legend: A few kilometers north of the city proper was a village which had become known then for its ancient tree having a hollow trunk. It was called Palakpak. Some villagers said that on moonlit nights they could see a beautiful, red-haired lady washing her long hair with the hollow trunk serving as her wash basin. There is also a river nearby, where a big fish appeared each night the beautiful lady was around. The villagers would not catch it, believing that it must be her pet.

One day a stranger came to the village and tried to solve the mystery about the red-haired lady and the fish. And so one moonlit night, he waited for her. Seeing the lady in her pristine glory, the stranger approached her. All of a sudden there was thunder and lightning. The earth quaked with terrible intensity, while the river swelled alarmingly into a lake. From that time onwards, that lake produced a large quantity of shrimps which when cooked, turned red. People since then had affectionately called their village "Palakpakin," after that ancient tree, and the shrimps in the lake became a principal source of livelihood, which they call "Hipong Palakpakin" or Palakpakin Shrimp. 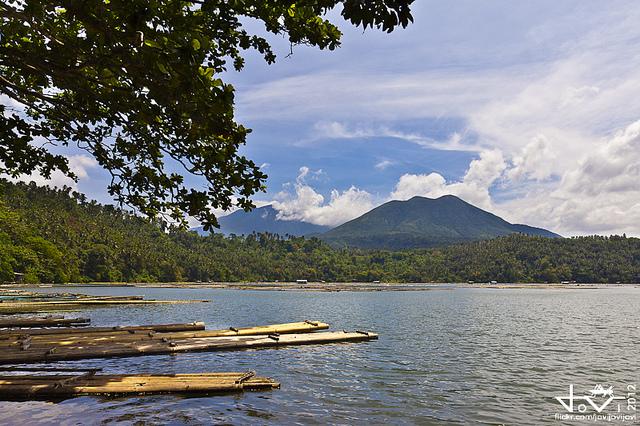 The lake is situated in Brgy. Sto. Angel in San Pablo City. Calibato has an area of 42 hectares and maximum depth of 135 meters. Calibato's greatest volume of water in storage is approximately 29,600 cubic meters. It supplies the city and nearby towns with abundant fish. The lake is the deepest recorded among the seven-lake system; there are no recorded depths available for lakes Yambo and Muhikap.

Legend: It was told that the area was the domain of a Diwata (fairy) who had wanted to keep her realm free from the intrusion of mankind. Thus, she was angered when people built rocky pathways that criss-crossed her valley. She caused a strong earthquake and a severe storm that transformed her valley into a lagoon.

The villagers living on the other side of the surrounding hills, gaping at the sight they beheld the following morning, named it Lake Calibato, taken from the criss-crossing stone pathways of the valley. Cali must have been a conjunction of the Spanish "Calle" or Street, while Bato means rock or stone in the local dialect. 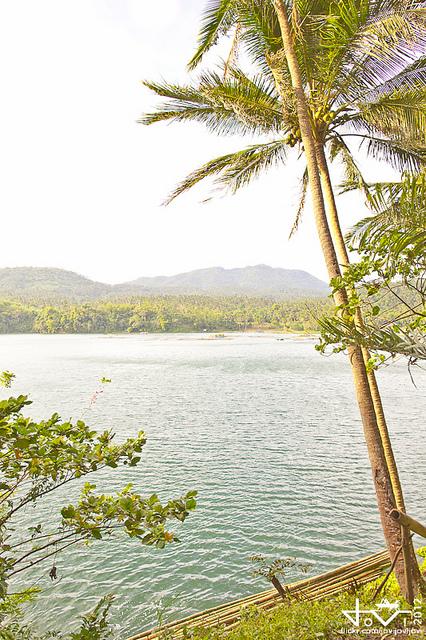 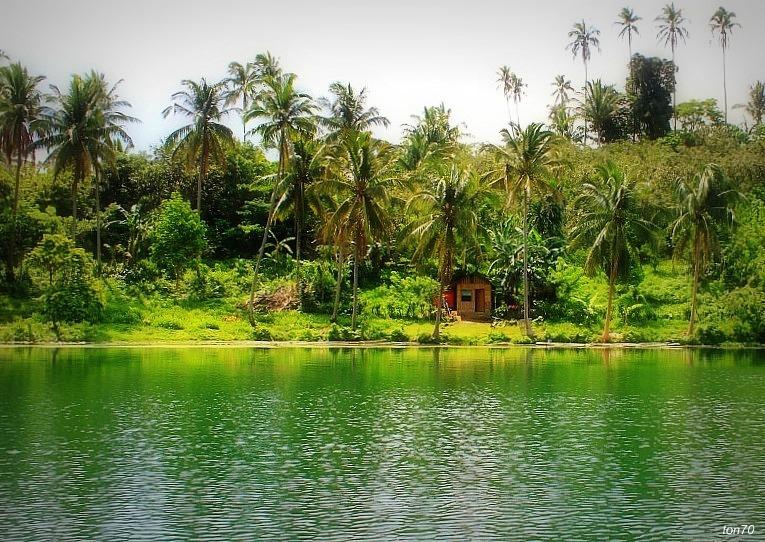 Pandin and Yambao are twin crater lakes separated by a narrow strip of land. The lakes can be found in Brgy. San Lorenzo, San Pablo City, Laguna. Lake Pandin is said to be the most pristine of the seven lakes of San Pablo. It has an area of 20.5 hectares and a maximum depth of 63 meters, with a calculated volume of 6,600 cubic meters of water in storage. Yambo Lake has a normal surface area of 28.5 hectares and is suitable for swimming, outing, and picnic.

Both lakes are considered as Oligotrophic – having low primary productivity as the result of low nutrient content.

Legend: It was told that these two lakes were named after two lovers. According to the legend, a beautiful woman named Pandin was cursed not to step on the earth, otherwise, something terrible would befall her. Yambo, her ardent lover, didn't know about the curse and had made her step on earth, after which there was a terrible noise followed by the cracking grumble of the earth. A heavy downpour eventually converted the area where the lovers were on into twin lakes separated from each other by a bare strip of land. 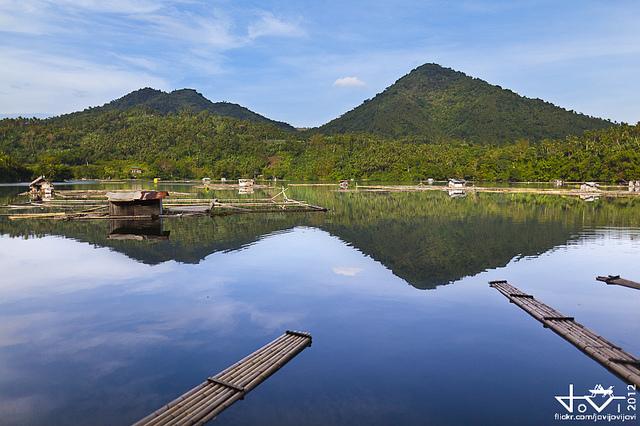 The Lake is located in Brgy. Sta. Catalina. It has an area of 14.5 hectares (36 acres) and is one of the main suppliers of water in the city. The waters of San Pablo lakes provide a generous source of tilapia for Metro Manila and the suburbs.

Legend: The legend of Lake Muhikap is quite similar to those of Lakes Pandin and Yambo. It tells of a couple who had a very sickly daughter named Munica. The couple kept praying to God for the good health of their only child and promised to do anything if He would answer their prayers. God granted their prayer on condition that Munica must not set foot on the earth. The girl grew up to be very industrious.

One day while her parents were away, Munica was sewing a dress. The ball of thread she was using fell on the ground and while the girl tried to get the thread, she fainted and fell. She suddenly sank with the entire neighborhood, and a lagoon was formed. This body of water was later called Muhikap in honor of the unfortunate girl. It is derived from Munica, the girl's name, and "mahikap," which means industrious in the local dialect. 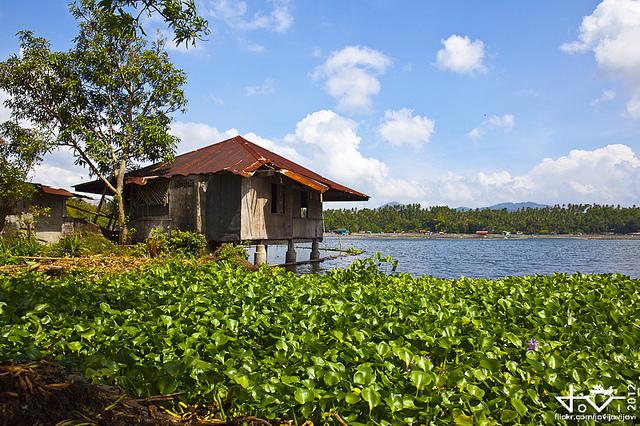 Lake Bunot is located in Brgy. Concepcion, San Pablo City. Only 4.5 km from the city proper, Bunot is known for its cultured tilapia and fishpens for Nilotica fingerlings. Bunot has a normal surface area of 30.5 hectares with a maximum depth of 23 meters.

Bunot is a convenient site for picnics. It is a real haven for nature lovers and very ideal for swimming and relaxation.

Here is a list of terminals where you can spot buses that have a trip going to Laguna.

Take the bus that has a signboard "Lucena via San Pablo". The travel time will take more or two hours if there is no traffic.