Ifugao: Home of the Rice Terraces and Native People 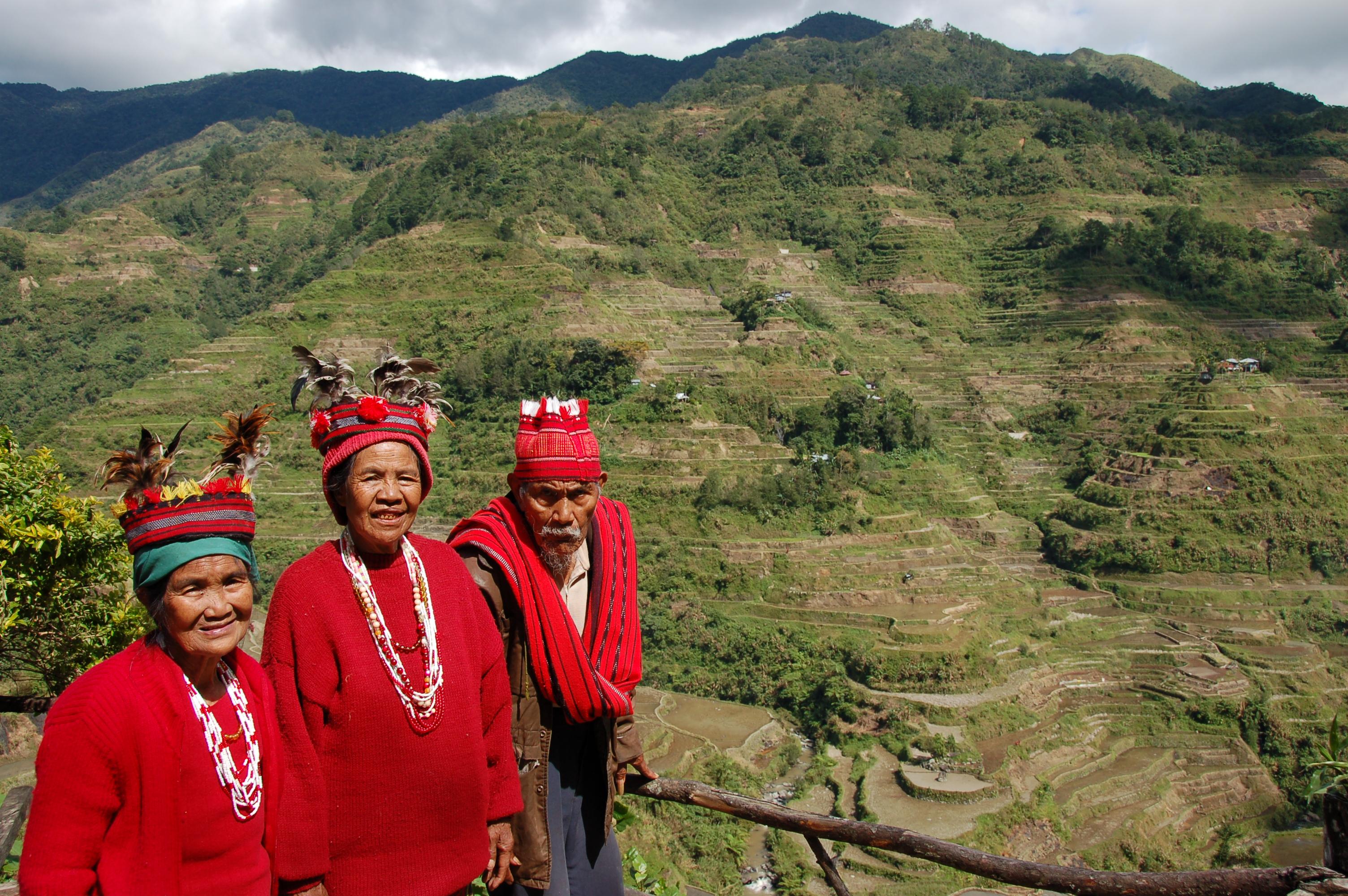 Ifugao is a landlocked province of the Philippines in the Cordillera Administrative Region in Luzon. Covering a total land area of 262,820 hectares, the province of Ifugao is located in a mountainous region characterized by rugged terrain, river valleys, and massive forests. Its capital is Lagawe and borders Benguet to the west, Mountain Province to the north, Isabela to the east, and Nueva Vizcaya to the south.

It is named after the term "i-pugo" which means "I" (from/people) and "Pugo" (hill), thus people of the hill.

The Rice Terraces of the Philippine Cordilleras and Banaue Rice Terraces are the main tourist attractions in the province. These 2000-year-old terraces were carved into the mountains, without the aid of machinery, to provide level steps where the natives can plant rice. In 1995, they were declared a UNESCO World Heritage Site.

Ifugao is endowed with historical, cultural, natural and man-made tourist spots and attractions, which can lure any nature-loving tourist. The range of attraction offered in Ifugao is clustered according to municipalities

Gigantic memorial shrine to commemorate the end of World War II. It is a concrete pyramid type structure, which resembles an oversized Ifugao native house located at Linda, Kiangan. It depicts historical events from Filipino opposition, to the Death March and the role of the Ifugao and American troops in the defeat of General Yamashita. It could be used as a viewpoint of the Poblacion, other neighboring barangays and the capital town of Lagawe. The shrine is ten (10) kilometers away or 15 minutes drive from the capital town.

The hill overlooking the Poblacion of Kiangan. It got its name from the last war when the allied armies spent millions of dollars worth of bombs and ammunitions to annihilate the enemies in the area.

House relics memorializing the end of W.W. II in the Philippines. Details of the surrender and signing are available. From here, General Yamashita was brought to Baguio for his formal surrender to the victorious Allies.

The site where Japanese troops fought fierce battles during W.W. II. The mountain has several grottos stone walled trenches and foxholes. One can also find rusty shells on this old battleground.

This museum displays Ifugao artifacts and is under the supervision of the National Museum of the Philippines. It is 32 meters away facing the shrine and 300 meters away from the Municipal Hall.

A typical village situated 240 steps down from the Banaue Hotel's swimming pool. Woodcarving and hand woven products are produced and sold to travelers.

Twelve (12) kilometers from Banaue located in the center of the Bokiawan rice terraces where traditional Ifugao practices of land use and livelihood still exist.

Is a rustic village in the first leg of the trekking route from Banaue viewpoint to Banga-an. This cobbled stone village offers a native house stay. The ancient craft of bark cloth weaving thrives here.

These are large stone mausoleums containing the bones of the town's ancient warriors and elite. The construction of these Igloos represents the resourceful use of Ifugao stoning technique.

Are filled with wood coffins and the remains of the first people of Mayoyao. A legend tells of an attentive lizard leading people to these three chambers designating each one for men, women and children.

Is a huge enchanted black rock held by only three smaller stones in the middle of the Balangbang river. It is believed to mean that Mayoyao people will stay strong and happy as long as the stone stands.

These villages are characterized by the presence of a wholesome community where the livelihood activities are within the surroundings, and the houses are clustered in a designated area. They showcase the typical Ifugao community.

It is located at the rocky slope of Ibulao, which is about 2 kilometers from the provincial capitol. The mouth of the cave is overlooking the Ibulao River. It is a three-room cave with dripping water that forms stalactites and stalagmites of different beautiful shapes. It can be reached by tricycle ride and 20-minute ascent to the mouth of the cave.

The cave is much larger than Bintakan Cave and has a descending entrance with four rooms but there are still other rooms unexplored. It is located at Boliwong, Lagawe, about 4 kilometers hike from the Poblacion passing through trails. Huge quantities of guano are found in the cave.

A sulfuric hot spring at Barangay Tukukan in the Municipality of Tinoc. This can be reached by a two-hour hike from Monsoyosoy, Buguias, and Benguet.

A four kilometer drive from Banaue, Poblacion. One has to hop and jump over huge boulders to reach the crystal clear waters of Guihob. It is a perfect place for those who prefer a cool and refreshing swim.

About 30 minutes from Batad Village is a cascading waterfall with its enormous natural pool for swimming. A visit to Batad would be incomplete without seeing this beautiful waterfall.

This can only be reached by a three-hour hike from Poblacion, Hungduan. This is located in Barangay Abatan and is near the border of Hungduan and Tinoc municipalities.

Legend says that the area was once a large sitio that became a lake because some children killed and made fun of the leeches in the spring. The lake is deep and good for swimming and boating. The shaded surroundings is an ideal place for picnics. It is now the site of a research on fishing culture. The lake is four (4) kilometers from the town center of Kiangan and can be reached by four-wheel drive vehicles.

These hot springs are found at the bank of Ducligan River and adjacent to a deep pool. Ducligan is 21 kilometers away from the Poblacion.

(Leap of Mahencha) Located about six kilometers from the town proper is a series of high cascading falls. Local folklore says that a beautiful Mahencha had to jump 13 to 5 meters into the water to retrieve her native amber necklace which fell while she was taking a bath.

Located five kilometers from town, it has three natural pools rising about 12 meters from each other. The water falls from the pool cascades to the next in beautiful succession. Untouched by human hands, these natural pools provide clear cool mountain spring water.

Are located in Julongan barangay. Bagnit is a stunning series of cascading falls running over 250 feet, while Numbungug Waterfall is a single majestic fall of over 80 feet into height falling to the Ibulao river tributaries.

Is located near the town proper which affords a panoramic vista of the Mayoyao World Heritage site cluster. The glory of the site is unrivaled.

This is a legendary stone which lies next to the Hapao river. The site offers an adventurous spot for river swimming and diving.

Is located in Ba-ang that lie in the Hapao river which serves as a delightful respite after trekking.

Dubbed as the Eight Wonder of the World. The rice terraces start from the base of the mountain range and reach up to several thousands feet high. It is said that its length, if put end to end would encircle half of the globe. Made 2,000 years ago, these rice terraces manifest the engineering skill and ingenuity of the sturdy Ifugaos. In 1995, it was inscribed in the UNESCO Heritage List as a Continuing Cultural Landscape.

These rice terraces are shaped like of an amphitheater and is located in barangay Batad. It can be reached by a twelve-kilometer ride from Banaue Hotel and a 2-hour hike uphill through mountain trails.

This spot is 44 kilometers away from Poblacion, Banaue. The Poblacion of Mayoyao lies in the midst of these rice terraces thus upon arrival in the town, one is awed with a breathtaking view of the rice terraces where all the dikes are tiered with flat stones.

This is another stonewalled rice terraces located in the municipality of Hungduan and is 55 kilometers from the capital town of Lagawe.

It is reputedly the biggest dam in Asia. This is located near the municipality of Alfonso Lista and about 25 kilometers from the town center of Santa Maria.

Are found in Kiangan and these show how forest management and rice terracing are complementary.

This 8th highest peak in the Philippines with an elevation of 2,702 meters (8,865) above sea level is located between the boundary line of Banaue and Mayoyao and between Ifugao and Mountain Province. Its summit provides the climber with a breathtaking panorama of Mountain Province, Isabela, Nueva Viscaya and Ifugao. Mayoyao legend says that the first Ifugao couple, Bugan and Wigan took refuge in this mountain during the 40-day deluge that inundated the province. Being the only survivors, they became the first ancestors of the Ifugaos.

Located in the municipality of Hungduan, this mountain is very accessible to mountain trekkers. The thick tropical rainforest and its rare flora fascinate conquerors of this peak. Trees near the peak are unusually short.

Centrally located in Ifugao, this mountain peak is considered a potential camping site to be developed in the province. It provides a breathtaking view of Hungduan municipality, and the low-lying municipalities of Lagawe and Kiangan and the rice terraces of Hingyon.

Banaue is a town on the Cordillera mountain range in the north of the island of Luzon, in the Philippines. It is mainly visited for its stunning rice terraces, which are a UNESCO World Heritage site.

Getting to Banaue directly might take a lot of effort if you're not taking a direct route from Manila or if you don't have a tour agency to help you.

Ohayami Trans, Lacson Ave. cor. Fajardo St., Sampaloc, Manila (Just near University of Sto. Tomas or take the train from the Legarda Station then just take a trickshaw to the terminal. The travel time is about 9-10 hrs. Provides trips directly to Banaue. They have three daily trips - 9pm, 9:45pm and 10pm leaving their terminal.

Manila-Solano, Nueva Vizcaya-Banaue ifugao - buses heading to Tuguegarao (e.g. Baliwag transit, Victory,Florida transport inc., etc.) pass by the town of Solano. Several jeepneys ply the Solano-Banaue route or the Solano-Lagawe, Ifugao route. From Lagawe, one can then take another jeepney to Banaue.

Manila-Tarlac-Solano-Banaue - buses heading for Baguio pass by Tarlac. Vizcaya liner plies the Tarlac-Solano route at 5 am.

The distance between the Balintawak Cloverleaf, in north Manila at the beginning of the North Luzon Expressway and the Welcome to Banaue sign, is about 332 km. The road is paved all the way to Banaue. Travel time can be as long as 9 hours due to the several blind curves through the mountains.

Best day to travel is on good Friday of Lenten season, Christmas day and new year's day. It will take about 7 hours only by car with a reliable driver.

Jeepneys (converted jeeps/bus) and tricycles (trikes) (little motorcycles with sidecars) are easily available around Banaue. Vans can be hired with driver/guide. Expect to hike some to great places to see that are not on the roads. There is a public jeepney plying the Banaue-to-saddle-point (start of trek to Batad village) route daily. See Get Out, below for more info.