Romblon: The Marble Capital of the Philippines 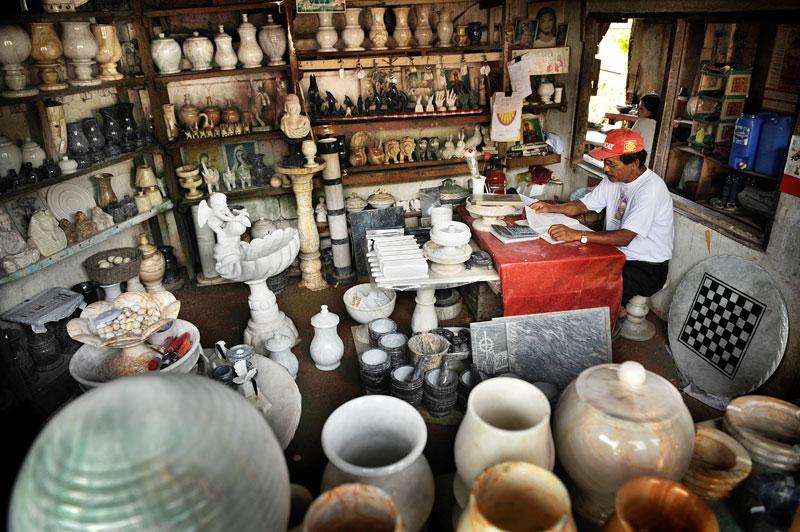 One of the many stores that sell ceramics in Romblon

Romblon is an island province in the Philippines located in the MIMAROPA Region. It lies south of Marinduque and Quezon, east of Mindoro, north of Aklan and Capiz, and west of Masbate. Its capital is also named Romblon.

The province of Romblon is composed of three larger islands; Romblon Island at the center where the provincial capital is located, Tablas Island, west of the capital and Sibuyan Island, east of the capital. It also includes the smaller islands of Banton, Maestro de Campo, Simara, Carabao, Carlota and Isabel.

Romblon's early inhabitants were the Negritos from Panay and Mangyan tribes from Mindoro. Ancient wooden coffins discovered in the caves of Banton Island in 1936 signify a rich ancient civilization and culture in the province before the arrival of the Spaniards. These artifacts are currently in display at the National Museum in Manila.

The islands were first colonized in 1570 by an expedition headed by Juan de Salcedo, nephew of conquistador Miguel Lopez de Legazpi. In 1853, it was organized into a politico-military district and made a sub-province of Capiz. In 1917, after the American colonial rule was established in the Philippines, it was converted into a separate province by Philippine Act No. 2724. It was returned under the control of Capiz during the Japanese occupation of the Philippines. On January 1, 1947, following the liberation of the Philippines, the regular provincial status of Romblon was restored.

The province of Romblon has a mainly agricultural economy with copra farming, fishing, and rice farming as the chief agricultural activities. The fertile soil nurtures various agricultural crops like coconut, rice, corn, bananas, raffia palm, root crops, fruit trees, and many others. Its abundant fishing grounds supply fish to various distribution centers in Batangas and Quezon province. Mining is also a lucrative industry in the province due to its vast mineral resources. Aside from marble, the islands are rich in granite, nickel, silica, mercury, zinc, copper, silver, limestone, sulfide, ores, kaolin, clay, magnesium, and quartz. Gold panning sites have sprouted in some of the mountain stream areas in Magdiwang, Sibuyan Island. In recent years, tourism is also becoming a viable source of income for the province as its pristine beaches and crystal clear waters attract local and foreign tourists to visit and experience its physical beauty and culture.

Off the coast of Barangay Talisay, Calatrava Romblon

Straddles the towns of Magdiwang, San Fernando and Cajidiocan in Sibuyan, Romblon

Off the coast of Brgy. Guinbirayan, Sta. Fe, Romblon