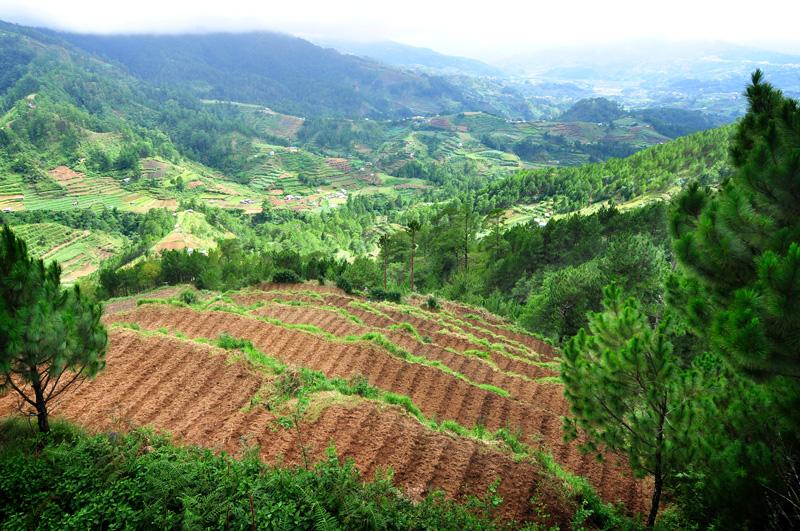 Mountain Province is a landlocked province of the Philippines in the Cordillera Administrative Region in Luzon. Its capital is Bontoc.

Mountain Province is bounded in the east by Isabela, in the north by the provinces of Kalinga, Apayao, and Abra, in the south of Benguet and Ifugao, and in the west by the province of Ilocos Sur. It has an area of 229,231 hectares, 83% is mountainous while 17% make up hills and levels. The province has plenty of rivers, waterfalls, mountains, and caves.

Mountain Province is sometimes incorrectly named Mountain in some foreign references. The name is also incorrectly shortened by locals to Mt. Province, which in turn is read by native Anglophones as "Mount Province". The province was named so for being in the Cordillera Central mountain range found in the upper realms of Luzon island.

Mountain Province was also the name of the historical province that included most of the current Cordillera provinces. This old province was established by the Americans in 1908 and was later split in 1966 into Mountain Province, Benguet, Kalinga, Apayao and Ifugao.

Mountain province is known for its “Mummy Caves” which contain naturally mummified bodies which probably became so due to the humid atmosphere. The hanging Coffins are also found in the province, these are literally coffins hanging on to the branches of trees, many tourists claim there is no foul odor, the bodies were probably mummified by the atmosphere according to theory.

Found at the heart of the capital town. The statue of Dr. Jose Rizal stands towering the plaza, which serves as a good respite and also as a playground and meeting venue for programs and other gatherings.

Located within the Catholic Sister's Convent and Saint Vincent's Elementary School. Sister Basil Gekiere, ICM, founded it. It features a range of artifacts crafted by the Igorots for domestic purposes, to be used for traditional celebrations or practices. Inside the museum, one could appreciate the distinct richness of the Igorot's way of life. Beside the museum building is a model of traditional Bontoc village, which highlights some of the various aspects of the Bontoc material culture.

Loom weaving is done in Sabangan and Sagada. Samoki, a village in Bontoc specialize in backstrap weaving. Various colorful woven materials like knapsacks, placemats, bags and purses among other products.

Traditionally, it is a place where the council of elders hold various ceremonies, meetings and happenings which maybe religious, social and political in nature. It is a public structure used as a dormitory by the bachelors, widowers, young boys and visitors in the village. A fireplace is built at the center and a wooden pole stands opposite it where heads of animals butchered and sacrificed are hung.

Liang Burial Cave (can be reached through regular jeepney ride to the poblacion and hiking to reach the caves).

Formerly Mount Mogao is a canonical shaped and stand proudly over 3 villages. It is considered as sacred and appears serene and solemn at dusk or dawn.

Thickly forested and beckons for wilderness walk and site of ABS-CBN and RCPI satellite.

A primitive formation of two rocks where farmers can determine seasons by how the sun's rays fit into crevices in the rock formation.

A huge rock inscribed with bows and arrows believed to tell the ancient fertility rites of the natives.

The mountain tops and mountain sides provide panoramic/scenic viewing of the winding Chico River meandering through ricefields, rocks and sand as well as good vantage points to humble dwellings of the villagers.

The eels thriving in the Cagubatan spring are conceived to be sacred and thus could not be eaten, they are believed to maintain the continuous flow of water to irrigate the rice fields.

A mini-shopping center managed by the Department of Trade and Industry where skillfully crafted indigenous products are sold.

Mini stairways to the sky, distinct from the Banaue Rice Terraces because they are made up of perfectly engineered stone riprap.

Nature trekking through the Bontoc Circuit Trail to appreciate the natural wonders and beauty of the province.

River Rafting: Chico River offers a challenging and thrilling route for rafting especially on the rainy months of June - August.

From Manila, ride a bus that ply routes to Manila-Banaue-Bontoc-Sagada. There are buses that end the trips in Bontoc - the capital town of Mt. Province - and there are also buses that trips end in Banaue. From there you can ride a jeep going to Bontoc.