Agriculture is the primary industry in the province of Nueva Ecija, of which it became the Food Bowl and Rice Granary of Central Luzon. The primary agricultural products are rice, corn, onion, garlic, melon, and mango. Its agricultural production covers an area of about 298, 742 hectares of fertile lands that are nourished by the Great Pampanga Rivers and its many auxiliaries. 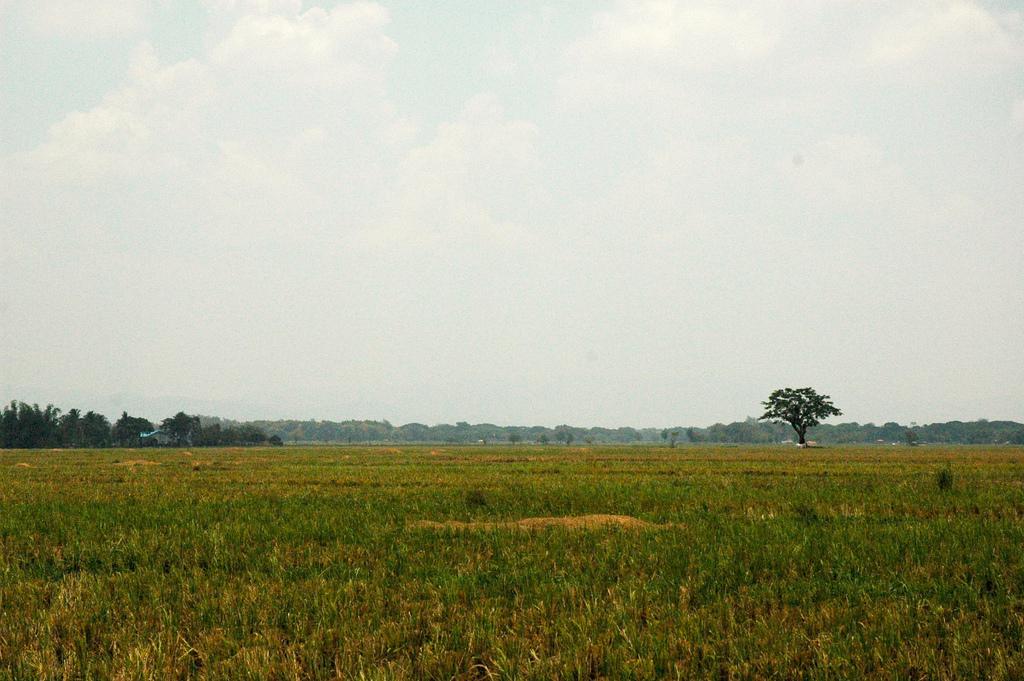 Nueva Ecija is a landlocked province of the Philippines located in the Central Luzon region. Its capital is Palayan City. Nueva Ecija borders, from the south clockwise, Bulacan, Pampanga, Tarlac, Pangasinan, Nueva Vizcaya, and Aurora.

The Province is composed of 27 municipalities and 5 cities and an aggregate total of 849 barangays. It has a total land area of 550,718 hectares where 63% or 330,726 hectares are alienable and disposable lands and the remaining 37% or 197,448 hectares are forestlands.

Nueva Ecija is dominantly a Tagalog-speaking province. A majority of 75% of the population speaks Tagalog and 22% speaks Ilocano, while the remaining 3% speaks in Pampango and various dialects from Luzon, Visayas, and Mindanao.

Nueva Ecija is endowed with rich cultural heritage. The expansion of Christianity and the influx of migrants from the Ilocos region and Pampanga influenced the foundation of the unique culture of Nueva Ecija. The province served as a melting pot of different cultures that molded the way of life of Novo Ecijanos. Their values and spirituality are expressed in different unique ways and traditions that made Novo Ecijanos district.

Every town has a flamboyant fiesta celebration that exhibits the people's humility and devotion in their patron saints. This is best shown in Bibiclat, Aliaga where the famous Taong Putik or Nagsa San Juan ritual is celebrated during the Feast of Saint John the Baptist every June 24. During the celebration, the devotees cover their bodies with mud and dried leaves.

Music is the form of art that closest to the hearts of Novo Ecijanos. The National Artist in Music, Maestro Felipe Padilla de Leon, is a Novo Ecijano who made use of music, not just a form of art, but as the best instrument to express one's ideologies and aspirations for his country.

Nobo Ecijanos are God-fearing and have close-knit family ties. They work closely together with respect and gratitude. Sharing the fruit of their labor is the normal practice among families in the community. Thus, making every Novo Ecijano family a strong brick in building a great province.

Agriculture is the primary industry in the province, of which it became the Food Bowl and Rice Granary of Central Luzon. The primary agricultural products are rice, corn, onion, garlic, melon, and mango. Its agricultural production covers an area of about 298, 742 hectares of fertile lands that are nourished by the Great Pampanga Rivers and its many auxiliaries. The slipper industry is also a growing business in the community level in Gapan City. The home-based industries of slipper producers turned into a cooperative venture of the whole community to promote and market Novo Ecijano made sandals and slippers.

Nueva Ecija offers boundless opportunities in agro-industry and agri-based trading activities to local and foreign investors. The province's vast, arable and irrigated agricultural lands and support facilities optimize these opportunities. Various agricultural research and development institutions are collaborating with the Provincial Government to achieve the agricultural advancement and secure the food supply not only in the province, but in the whole country as well. 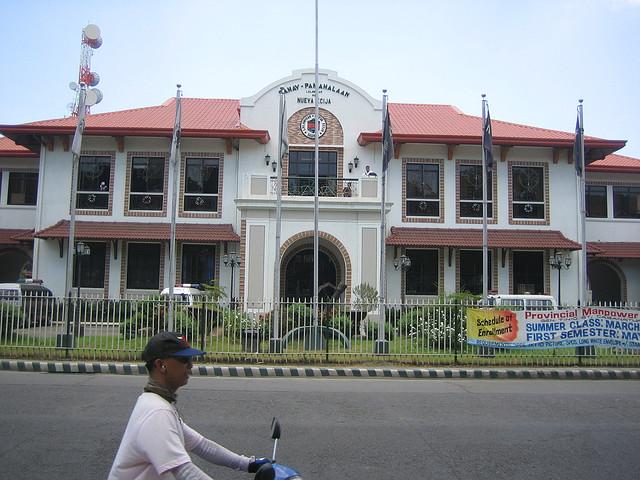 Welcome to the Province of Nueva Ecija 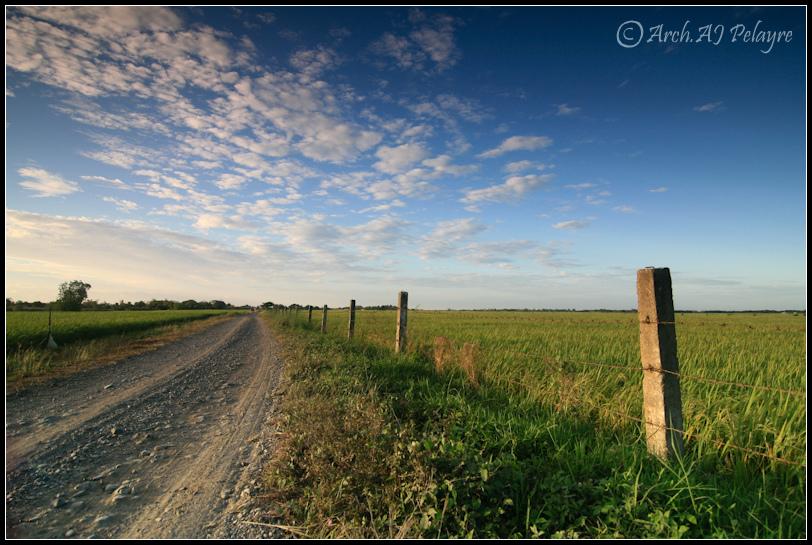 The first Augustinian mission in lowland Nueva Ecija was founded in Gapan City in 1595. It is home to a Roman Catholic church of Byzantine architecture built from 1856 to 1872.

The resthouse of the Quezon family is located in this barrio, along the National Highway going to Baler, Aurora. It is also the place of death of Mrs. Aurora Quezon, wife of former Philippine President Manuel Luis Quezon.

Centuries-old brick walls of the Tabacalera in San Isidro remain as witness to the Novo Ecijanos’ 100-year oppression, from 1782 to 1882, when the province became the center of the tobacco monopoly in Central Luzon and was thus restricted from raising other crops.

A statue of Philippine hero General Antonio Luna astride a horse stands at the plaza in front of the cathedral on the exact spot where the brave general was assassinated in 1899 in the city that adopted him subsequently.

Site of the arrest of Philippine hero Apolinario Mabini, known as “the sublime paralytic,” by the Americans on December 10, 1899.

The Grand Sedeco house in San Isidro, which General Emilio Aguinaldo frequented, marks this gallant town that has proven time and again to be cradle of Filipino heroes. It was here that General Frederick Funston planned the capture of Aguinaldo, first President of the Philippine republic, during the Philippine-American war.

One of the first high schools established outside Metro Manila during the American period.

Located in Capintalan, Carranglan, the five-hectare area blessed with a cool climate houses the monument of General Dalton and a tower that borders the provinces of Nueva Ecija and Nueva Vizcaya. Uphill is a World War II memorial in black marble where a historical account of the war had been etched in English and Japanese.

Began as a military training camp for twenty years until converted into a concentration camp for allied prisoners of war during the Japanese occupation. A popular tourist destination among war veterans by way of the WWII Veteran’s Homecoming Program.

Description: The site features the breathtaking view of the narrow deep river that looks up to 16- meter high limestone walls. At the end of the white rock formation, is an enchanting cave that is perfect for trekking activities.

Description: The waterfalls are surrounded by green foliage and huge rocks. The bursting sound of its cool and refreshing water breaks the serenity of its environs. The place is perfect for group picnics and adventure.

Description: The site has three waterfalls that are surrounded by virgin vegetation. Going there is already an adventure, because, the site is located amidst cultivated vegetable farms and forested areas.

Description: The serene blue-sky glimpses the 1.61 kilometer long dam enveloped by the picturesque view of Sierra Madre Mountains. The dam's clear water with an average yearly in the sanctuary of tropical marine life and an inviting site for jetskiing and fishing. Pantabangan offers not only its enormous man-made lake but also its guesthouse, the Best View Hotel and Restaurant. With its Spa and Beauty Cottage Salon, swimming pool, tennis courts and water sports amenities, the tourists and guest enjoy the luxury and beauty of the placid scenery of the dam.

The easternmost barrio of Rizal nestled uphill on the foot of the Sierra Madre mountain range boasts of one of Central Luzon’s hidden treasures: a towering waterfall of more than a hundred feet descending widely across a rocky mountain wall into over twenty pools of varying levels and depths.

A hundred-step stair leads to the church built by the Adarnista spiritual community on the mountaintop. Frequented by pilgrims who bathe in and drink the water of its springs believing it to be medicinal.

Maintained by the Kalanguya tribal community from Ifugao, its rivers and low-lying hill are ideal for hiking and communing with nature. A gateway to the Cagayan Valley, it was a strategic location during WWII’s liberation period. Tunnels, war artifacts, and stories of gold digging abound in the area.

Located in San Jose City, it is ideal for picnics and bathing especially during summer.

Located on the 25-hectare site within Central Luzon State University. It helps provide the policy framework on fisheries; extend the support services necessary to make fishery and fishery based enterprises profitable; and formulate plans and undertake studies for the proper management, accelerate development and proper use of the country's fishery and aquatic resources.

BPRE is an attached agency of the Department of Agriculture and located within the CLSU compounds. Its R&D efforts are geared towards the following areas of concern: wet grain handling; aflatoxin contamination in corn and peanut; pest infestation in storage; facilities development and utilization; policy issues; post harvest entrepreneurship; and training and extension.

Located at Science City of Munoz, Nueva Ecija. The PCC operates as an attached agency of the Department of Agriculture and is mandated to conserve, propagate and promote carabao as a source of draft animal power, meat, milk and hide to benefit the rural farmers. Its program has four major components: strengthening of the gene pool; wide scale upgrading; enterprise development; and research and development.

It started as an Agricultural School in 1907 and has now become a comprehensive university with multiple functions on administration, instruction, research, extension, training and production.

Its main responsibility is aquaculture with tilapia as its major commodity responsibility. Some of FAC breakthroughs in research: 1. Development of a synthetic strain of Genetically Improved Farmed Tilapia; Sex reversal of tilapia; integrated livestock fish system; mass fingerling production.

Also located in Science City of Munoz, the FVSC is established by the Nueva Ecija Provincial Government with the support of the Department of Agriculture and CLSU to develop quality fruits and vegetable seeds. The center has 10-hectare area for production with pressurized irrigation system greenhouses, laboratories, conference rooms and modern farm machineries.

Situated in a 9.78 hectare area inside the CLSU campus, PhilSCAT is the first collaborative project between the Republic of the Philippines and the People's Republic of China through their respective departments and ministry. It was envisioned to make the Filipino farmers prosperous through the adoption of modern and appropriate agricultural technologies such as hybrid rice and mechanization jointly developed and evaluated by Filipino and Chinese scientists. PhilSCAT shall provide quality products and services to modernize the rice industry and maximize the benefits for the various stakeholders.

On February 13, 1986, the Three Kings Chruch of Gapan City was declared as the National Shrine of Virgen Divina Pastora.

Church ruins of identical Augustinian architecture can still be found in the three upland missions.

Parks, Farms and Other Interests

The site features landscaped hills and pagodas. On top of the hill, the panoramic view of Northern part of the province can be seen.

Located 100 meters away from the boundary arch of Nueva Ecija and Aurora, the park has ravines and cliffs that are ideal for adventure activities.

Climbing a hundred steps of curved stone, one reaches the church built by the Adarnista Spiritual Community on a hilltop. Downhill, the community gathers in a clear, bubbling spring that believed to be medicinal and miraculous. At night, fireflies enchant the evening in the barrio.

The Sideco house was built in the 19th century by Crispulo Sideco. It typifies the houses of the Floral period in the Philippine colonial architecture, where ogee arches, filigreed wooden panels, grilles wrought in curlicues and floral and foliate designs abound in the house as basic structural elements or as ornaments.

It had been the seat of General Emilio Aguinaldo's First Philippine Republic when he established it as his headquarters in San Isidro during the last part of his odyssey from the American forces.

Here is the list of hotels and resorts that can be found in the province of Nueva Ecija located in Cabanatuan City - one of the towns in Nueva Ecija.

Visitors can reach the province of Nueva Ecija by bus from Manila via Cabanatuan City. There are bus lines (The five star, Philippine Rabit, Baliwag, Saulog transit and Victory Liner) that ply the route to Nueva Ecija. Jeepneys and tricycles are available in the province as a common way of transportation around the province.