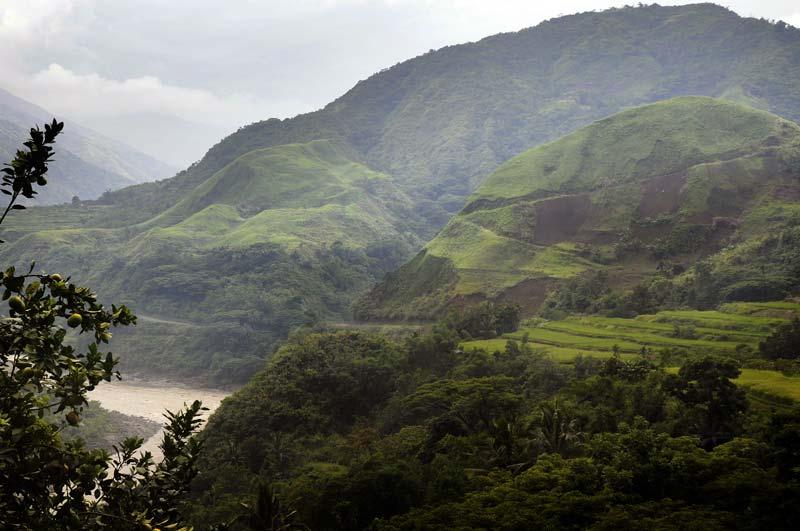 Kalinga is a landlocked province of the Philippines in the Cordillera Administrative Region in Luzon. Its capital is Tabuk and borders Mountain Province to the south, Abra to the west, Isabela to the east, Cagayan to the northeast, and Apayao to the north. Prior to 1995, Kalinga and Apayao used to be a single province named Kalinga-Apayao, until they were split into two to better service the needs of individual native tribes in the provinces.

The name Kalinga is derived from the Ibang and Gaddang Kalinga, which means headhunters. In the past, headhunting was considered noble and it symbolizes bravery. Tattoos, a status symbol which men respect and which women admire, are given to warriors as reward. Thus a mingol or warrior enjoys a high status in Kalinga society.

The Bodong to the Kalingas or peace pact is an indigenous socio-political system that defines intertribal relationships. This was developed to minimize traditional warfare and headhunting and serves as an institutional renewal, maintenance and reinforcement of social ties. Recently, the Bodong was expanded into a multi-lateral peace pact providing a means of strengthening unity in some parts of the Cordilleras.

The Spanish missionaries and politico-military forces successfully penetrated into the forbidding Apayao and Kalinga Tribal territories as early as 1608 when Father Geronimo Molina started his mission work in Pudtol (Apayao) and also in 1689 at Tuga (Kalinga) where the first Catholic Mass was celebrated.

During the short-lived Philippine Republic, President Emilio Aguinaldo in his flight to Palanan, Isabela crossed the upper Kalinga areas in his vain attempt to elude his American pursuers. For 35 days, President Aguinaldo established his headquarters at Lubuagan since March 18,1900. Here he issued his orders to his military generals and the civil officials of his revolutionary government until he was forced out of Lubuagan upon learning that his pursuers were sighted at Mabongtoto. This prompted him to escape towards Tabuk in that historic last leg of his flight to Palanan where he was later captured.

On February 4,1920, Act No. 2772 was promulgated reorganizing the Lepanto-Bontoc Province into Mountain Province constituted by the five provinces of Benguet, Bonito, Ifugao, Kalinga-Apayao. Lubuagan was the capital of Kalinga while Kabugao was the capital town of Apayao.

On June 18,1966, Republic Act No. 4695 was enacted creating from the old Mountain Province five separate and independent provinces: Benguet, Ifugao, Mt. Province (Bonito), and Kalinga-Apayao. On March 26, 1967, President Ferdinand E. Marcos administered the oath of office to the new officials of the four newly born provinces.

The first appointed provincial officials of Kalinga-Apayao province were Ceferino B. Ramirez, Provincial Governor; Amado B. Almazan, Vice Governor; and Board Members Castro B. Lammawin and Carlos Deguiom.

Presently, Kalinga is fast emerging as an Eco-tourism Discovery of the Cordilleras since its operation as a regular and separate province on February 14, 1996.

It is located at Barangay Asibanglan-Pinukpuk Road at Allaguia junction. Gen. Aguinaldo used this hill as a common post during the Philippine-American war.

A mini-museum was initiated and established by the Kalinga Special Development Authority situated in their office building at Bulanao, Tabuk.

The viewpoint affords a majestic view of the valley villages and mountains of Tinglayan, Tanudan, Tabuk and Lubuagan. A very good view of the Tulgao and Dananao Rice Terraces can be seen at the viewpoint.

This waterfalls is located at Tulgao West, Tinglayan. The name is derived from the native term Pinalpallang-ah which means chair. The falls spray down from approximately 100 meters above forming a pool where during a sunny day, one practically swims at the end of the rainbow.

These fabled mountain ranges in the border of the municipalities of Tinglayan and Tanudan and they take the form of a sleeping lady supinely lying at its back. A vantage view of the profile can be seen from the Sungang view or from Basao.

From the Sungang View Point, the Dananao and Tulgao Rice Terraces can be viewed. These rice terraces are like an amphitheater along the whole mountain slopes.

This fabled mountain is located in Dacalan. It is the entry point of General Emilio Aguinaldo during his retreat to Kalinga.

This area is located above Barangay Lubo at the source of Gaburao Creek. At the side is a cave where Kabunian stayed while sawing lumber for his house.

Located four kilometers away from Poblacion, Balbalan and a good three and half hours ride from the Capital Town. It is a maze of cavernous boulders and rocks atop each other forming a cavern.

This is a monument of the opposition of the Kalingas against the logging companies.

It is similar to Sagada Caves with stalactites and stalagmites formations. The caves are interconnected with each other and cover the whole mountain slope.

This is perhaps the biggest acacia tree in Kalinga within a village. It is found at the school ground of the Aciga Elementary School and it is rumored that the tree is a landmark for the treasures of Yamashita.

These are a mountain lakes in Pinukpuk where eels thrive and can be recommended area for research.

This the hill where the Katipuneros made their last stand in Kalinga from the pursuing the Americans from Abra.

The name is derived from the plants that abounds in the lake called â€œChargoâ€ in the Pasil and is located approximately from 1, 800 to 2, 000 meters above sea level.

It is located at Puapo, Dangtalan and was formed after the mountain side eroded. It is ideal for boating and picnic site during the summer months.

These two natural landmarks are found in Maglucsad and Galdang respectively.

This village has its historical importance to Kalinga as the retreat haven of Pres. Aguinaldo. This is where the Headquarters were located and the campsite.

This is the center of the ethnic weaving industry in the province. The village is along the road and one can buy souvenirs right from the weavers.

This is along the road towards Tinglayan and one can have a panoramic view of the Chico River.

This is located in Rizal and is a site of an archeological digging where the other half of the remains of the elephant war dug.

The tourism plaza is located at the Capitol Ground and one can have a view of the Tabuk Valley.

A man-made Lagoon is fronting the Rizal Municipal Hall.

Rice terraces at Barangay Tulgao East, Tinglayan, 14 kilometers from the National Highway Road could be reached by vehicle. Father Gilbert Obin, a catholic missionary assigned in Tinglayan, constructed the barangay road. It offers a better panoramic view of the rice terraces and the sprawling villages of the different barangays of Tinglayan.

The tourism plaza is located at the Capitol Ground and one can have a view of the Tabuk Valley.

By land: From Manila, you can reach the province of Kalinga by riding the bus in Dangwa and Victory Liner Terminal via Tabuk – capital city of Kalinga. The travel time is about 10 hours. Buses from Manila usually leave when evening and it arrives morning in the city of Tabuk.

By air: If you want a faster trip, you can travel by air from Manila going to Tuguegarao. When you get there, public vehicles like jeeps going to Tabuk are available in the area. The travel time is about one hour.