The General Ricarte National Shrine was built in Batac, Ilocos Norte, in honor of General Artemio Ricarte, a native of the town, who was known for being a revolutionary hero and an important personality in World War II. 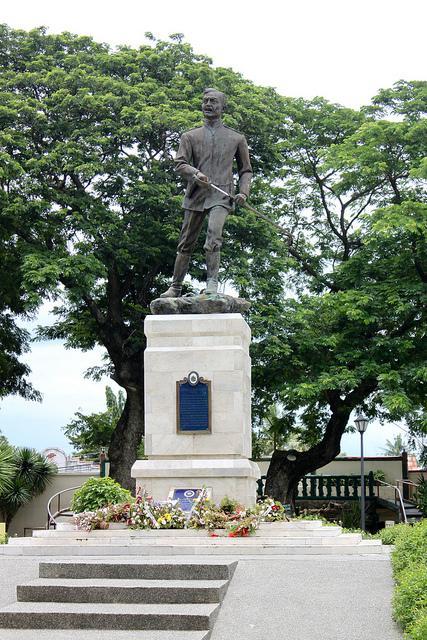 The General Ricarte National Shrine was built in Batac, Ilocos Norte, in honor of General Artemio Ricarte, a native of the town, who was known for being a revolutionary hero and an important personality in World War II. The shrine is made of a memorial park with a statue and two field guns. It has a library and museum showcasing Ricarte's life through a number of his photographs and relics, and a collection of American and Japanese guns used in World War II.

In 1972, a monument was erected at Yamashita Park in Yokohama, Japan, in memory of the General Artemio Ricarte. For his battles and deeds accomplished in Cavite, a marker was also placed at Poblacion, General Trias, Cavite.

In Batac, Ilocos Norte is now the Ricarte National Shrine which houses the birth house of Artemio Ricarte including a library and museum displaying Ricarte’s memorabilia.

From Manila you can have transportation by land or by plane.

• By Bus: Take a bus bound for Laoag. Travel time is 10-12 hours, so I would recommend a night trip for this. Several bus companies such as Partas, GV Florida Transport, Dominion Bus Lines, Philippine Rabbit, and Fariñas Transit have regular trips that will take you directly to Laoag City. Check out their websites for the trip schedules.
• By Plane: Take a direct flight from Manila to Laoag via Cebu Pacific or Philippine Airlines. Travel time is about an hour. Flights are usually at night, so better make the necessary adjustments on your itinerary.

From Laoag to Batac:

from Laoag City, you can hire a jeepney that will take you from Laoag to the nearby towns of Paoay and Batac. Batac is about 15km away from Laoag.